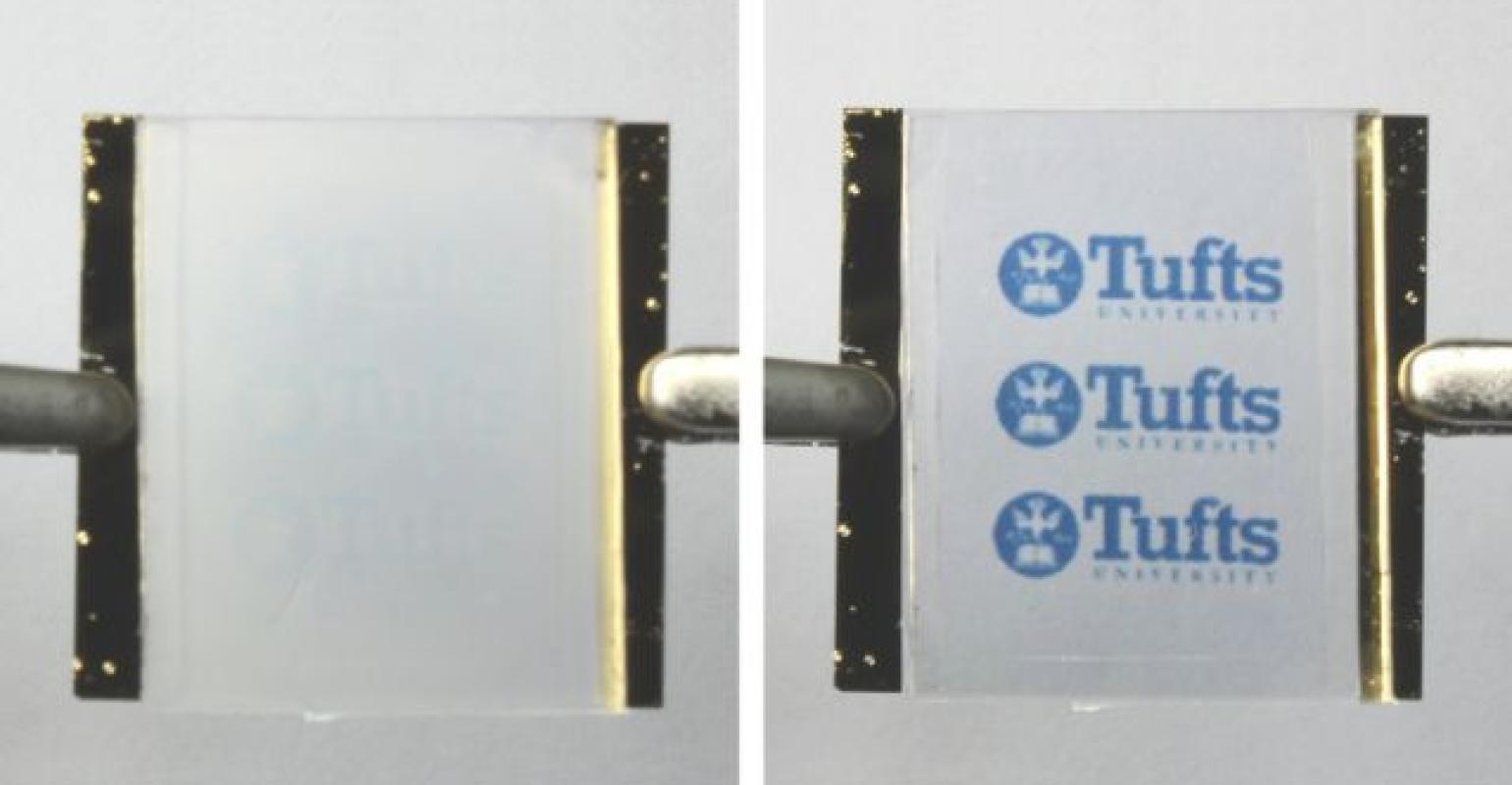 Silk Can Be Made Into Shape-Changing, Reusable Clothing

Researchers at Tufts University School of Engineering have designed new silk materials that can wrinkle into highly detailed patterns for next-generation smart clothing and optical applications. According to the researchers, the patterns can be in the form of words, textures, and even images as intricate as QR codes and fingerprints.

The transformation is also reversable, so the silk can be reused. “But beyond the novelty of reversible printing, there are many other functional applications that the silk patterning technology could provide,” Yu Wang, a post-doctoral fellow in the Tufts University School of Engineeringn noted in a press statement.

These applications are numerous, Wang said. They include materials with tunable optical properties, such as those that involve the use of dopants, allowing the patterned fabric to absorb or emit different wavelengths of light and energy, or exhibit patterns only from specific angles.

Other applications, according to the researchers, include next-generation textiles that can modulate their thermal properties to change and control the amount of heat they let through. And, since silk fibers are biocompatible, the material also could be used in biomedical applications.

The team published a paper on their work in the journal Proceedings of the National Academy of Science.

The materials function by taking advantage of the natural ability of silk fiber proteins, or fibroin, to change form in response to external conditions – including exposure to water vapor, methanol vapor, and UV radiation, said Wang.

“We can print patterns of remarkably high resolution in the silk – and we even showed that we can pick up the moisture pattern left by a fingerprint,” Wang said in a press statement.

Indeed, liquid is a key component to the material, the researchers said. They realized that water and methanol vapor, for example, can soak into the fibers and interfere with hydrogen bond cross links in the silk fibroin. This causes it to partially “unravel” and release tension in the fiber, Wang said.

The team manufactured a silk surface from dissolved fibroin by depositing it onto a thin plastic membrane comprised of PDMS. They put it through a cycle of heating and cooling, which caused the silk surface of the silk/PDMS layer to fold into nanotextured wrinkles because of their different mechanical properties.

Once these wrinkles were formed, the Tufts researchers found that exposing any part of the surface to water or methanol vapor causes the fibers to relax and the wrinkles to flatten. The smooth surface resulting from this transformation transmits more than 80% of light, while the wrinkled surface only allows 20% or less through. This contrast allows for perception of a printed pattern.

The team found that they also can create patterns in the silk by depositing water using inkjet printing, with resolution determined by the nozzle diameter of the printer.

The researchers were also able to form patterns using UV radation. The parts of the silk surface exposed to UV become less permeable to water or methanol and remain wrinkled when treated with vapor, while the parts not exposed to UV absorb the vapor and flatten out. This creates a new printed pattern that reflects the pattern of UV light exposed to the silk surface.

Once the material forms patterns, they can be erased and the textured silk can be regenerated with a cycle of heating the cooling. In tests, the researchers showed they could use the same material to print patterns over at least 50 cycles without any degradation in effect.

Moreover, the researchers demonstrated how they can connect the silk/PDMS layer to a small electrical heating element to switch the silk “on” and “off” between wrinkled and wrinkle-free states.

In their study, the Tufts team said they hope there will even be applications beyond the information encoding, optical modulation, and thermal regulation cases they've outlined.

“Because of [silk fibroin's] versatility, and ease of manufacture, I think there may be many future applications that we and others will come up with that we have not even imagined yet,” said Tufts engineering professor, and corresponding author, Fiorenzo Omenetto, in a press statement.