Researchers Can Now Join Aluminum and Steel for Lighter Vehicles 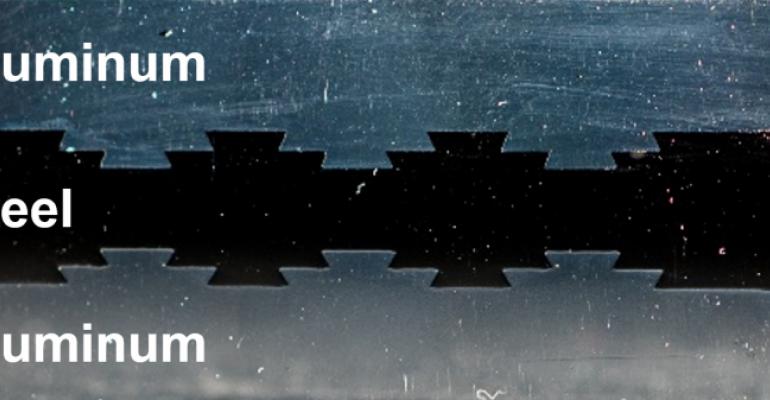 Researchers at Pacific Northwest National Laboratory (PNNL), funded by the US Army Tank Automotive Research, Development an Engineering Center (TARDEC), have developed a new process for joining aluminum and steel parts with the aim of lightweighting combat vehicles for more agility and fuel efficiency. The development fills an important gap, particularly when it comes to joining thick aluminum plates with steel. The Department Of Energy's Vehicle Technologies Office is also examining the technology for automotive applications.

Lab testing found that the joints resulting from the new process, called friction stir dovetailing (FSD), are not only stronger, but demonstrate five times higher ductility than welding and other friction stir approaches. The research was published in the April 15, 2018 issue of the journal Scripta Materialia.

A lot of companies in the transportation sector are pursuing lightweighting, which can considerably reduce fuel consumption. Ford, for example, uses aluminum in its F-150 pickup, due to its relatively low cost and high stiffness. However, even as more and more companies adopt aluminum, a number of critical components will continue to require steel’s superior strength in order to meet performance requirements.

Joining aluminum and steel has been difficult in the past. The two metals have considerably different melting points, and attempts to weld the two generally result in the formation of brittle intermetallics. One approach is the use of bimetallic inserts or fasteners, such as bolts. But this adds cost. And while bolts are good for disassembly, they also have numerous other disadvantages from a reliability perspective, such as corrosion and loosening.

The FSD process developed at PNNL is, as the name suggests, based on principles similar to friction stir welding (FSW). For those not familiar with this type of welding, it can be a bit tricky to describe. Friction welding is actually a form of forging, where heat is produced by the relative motion of two materials under high force loads.

The site, FSWelding.com (an online source for information on FSW), describes FSW as the use of a “non-consumable rotational tool with pin and shoulder,” which is generally “inserted in between abutted edges of plates to be joined and traverse along the joint line.” The joint is created by “stirring the material of the two pieces by the tool pin,” which causes plastic deformation of the two pieces. “Friction between the base material and tool shoulder creates heat that softens the basic material, thus easing the stirring process.”

While FSW is being used to weld different alloys of aluminum to one another, the new friction stir dovetailing process developed at PNNL takes this process a step further, allowing it to join aluminum and steel.

Scott Whalen, the lead engineer and researcher on the project, told Design News the FSD process begins by machining a trapezoidal or dovetail-shaped groove into the steel. “Then, we lay the aluminum on top of the steel. Next, we use a special tool called a friction stir dovetail tool, which goes into the aluminum through a pre-drilled hole, and begins to stir it,” Whalen said. “As the temperature increases, the aluminum softens and is pushed down into the groove in the steel. At the same time, a portion of the tool, which has a silicon carbide tip, is actually rubbing along the base of the groove. This creates a localized high-pressure/high-heat zone and also acts as a cleaning agent. As a result, a metallurgical bond forms—an intermetallic layer of iron and aluminum that forms at the interface, which is akin to the glue in a woodworking dovetail joint.”

Whalen went on to clarify, “If we were to simply melt the material and just let it flow in, there’s all kinds of bad things that start to happen. The main disadvantage is that you lose the properties of the aluminum. The second problem is that it would flow into the groove. But because it’s molten, it’s highly reactive, and the metallurgical bond that forms would be really thick—on the order of tens of microns thick. Those thick intermetallics are extremely brittle and they fracture with very little load.”

Whalen said that PNNL's process, by comparison, retains the properties of the aluminum by not melting it. “We also control the temperature and pressure at the interface, to a very high degree, so the intermetallics we form are in the range of 50-150 nm. Because they are so thin, they are not brittle and effectively join the aluminum to the steel inside the dovetail,” he added.

The FSD tool, it should be noted, has a pin with threads on it that do not cut or machine the material. Instead, they grab the material and pull it in a circle, while at the same time exerting downward pressure that drives it into the groove. By carefully designing those threads, you can cause the material to soften enough and start flowing without melting it.

“The intermetallic compound (FeAl3) responsible for the bond is the result of a high-temperature diffusion process between the aluminum alloy and the steel, with constituents of each, migrating a very small distance (e.g., 25 nm) into the other,” Whalen said. The formation of intermetallics is not uncommon in high-temperature metal processing like conventional welding, though it is not always beneficial or controllable.

This kind of solid phase processing is not unlike what happens with extrusions, where the material flows without actually changing phase.