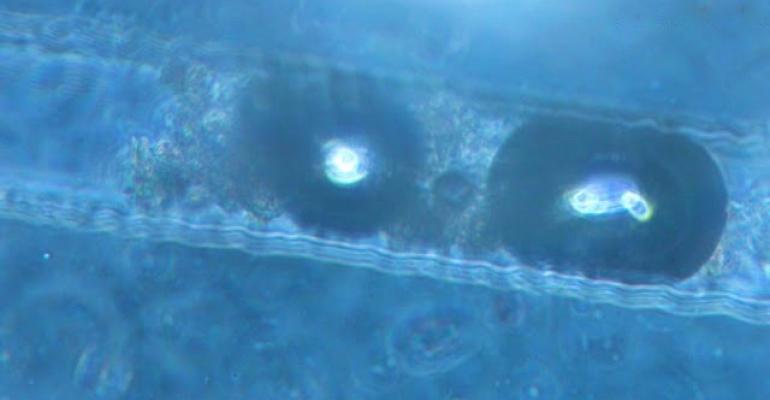 Antibiotic-resistant infections derived from microbial films that coat medical devices and surfaces in hospitals are becoming a deadly epidemic. As a result, researchers are continuously working to develop materials that can destroy these films in places where they thrive.

Researchers at the University of Illinois at Urbana-Champaign have come up with a new solution to this problem with a nano-based system of microbubbles to wipe out these films and prevent them from spreading disease.

A team led by Hyunjoon Kong, a professor of chemical and biomolecular engineering and a Carle Illinois College of Medicine affiliate, developed a novel microbubble scrubber that uses the tiny skeletons of algae—or what are called diatoms—doped with an oxygen-generating chemical to eradicate these biofilms, he said.

“Most of us get those black or yellow spots in our showers at home,” Kong said in a University of Illinois news release. “Those spots are biofilms, and most of us know it takes a lot of energy to scrub them away. Imagine trying to do this inside the confined space of the tubing of a medical device or implant. It would be very difficult,” he added.

Dangerous biofilms not only plague hospitals, but also can be found on the inside of water-supply pipes. They are basically groups of microbes held together by internal scaffolds that cling to anything they touch.

Researchers estimate that about 80 percent of all medical infections originate from biofilms contaminating surfaces and devices in hospitals. While administrators and staff try to use traditional disinfectants and antibiotics to kill these microbial colonies, the biofilms are resistant and these types of solutions can’t penetrate their tough surfaces.

Diatoms proved a natural solution to this problem, Kong and his team found. Their system uses naturally abundant diatoms along with hydrogen peroxide and tiny oxygen-generating sheets of the compound manganese-oxide to destroy biofilms.

The system works because of a chemical reaction between the hydrogen peroxide and manganese-oxide nanosheets that takes place within the empty space inside the diatom, Kong explained. This reaction causes a flourish of microbubbles to flow through the tiny channel, propelling the rigid diatoms forward with enough force to break up the surface and internal structure of the biofilms, he said.

“We dope the particles with nanosheets of manganese oxide, then mix them with hydrogen peroxide and apply that to the surface of the biofilm,” Kong said. “Once the diatoms break through to the internal structure of the biofilm, they continue to expel bubbles and facilitate the entry of hydrogen peroxide, which is an effective disinfectant against bacteria and fungus.”

While most researchers working on the problem of biofilms take a chemical approach to try to destroy microbes—with mixed results—Kong’s team believes their use of a mechanical solution to combat the problem is key to its success. The researchers published a paper on their work in the journal ACS Applied Materials and Interfaces.

Researchers plan to continue their work to put their system to practical use as well as explore other applications for it—such as for the removal of dental plague—alongside clinicians, they said.