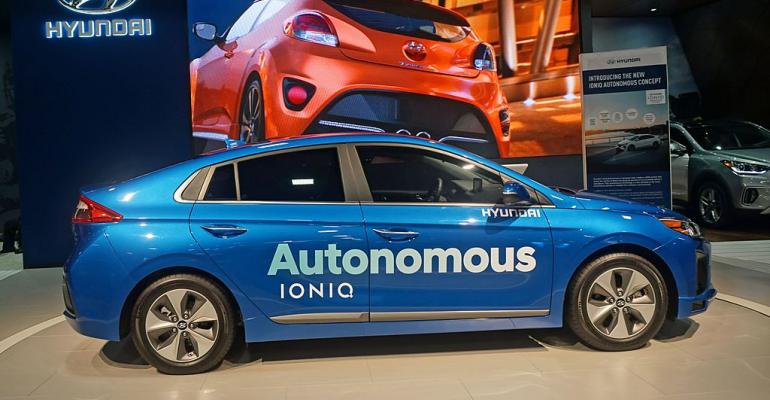 <p><strong>Hacking the Autonomous Vehicle</strong></p><p><strong>Wednesday, August 28 • 8:00 AM - 8:55 AM</strong></p><p><strong>Location: Room 207</strong></p><p>Our vehicles have essentially become computers on wheels. And no computer is immune to hackers and cyberattacks. A panel of automotive and cybersecurity experts will discuss the new realm of automotive safety and how automakers can address the growing threat of <a href="https://www.designnews.com/electronics-test/keeping-hackers-out-connected-cars/7386634661309" target="_blank">vehicle hacking</a>.</p><p> <em><em>(Image source: Wikimedia Commons)</em></em></p>
Researchers produced graphene in a cost-effective, non-toxic way using a simple, overnight process fueled by bacteria

We recently told you how researchers in Australia used bark from eucalyptus trees to produce the highly useful material graphene in a low-cost, more eco-friendly way than typical processes.

Now a researcher in the United States—working with a team in the Netherlands--also has reported a more eco-friendly and inexpensive way to create the carbon-based material, which has myriad uses due to its high electrical conductivity, low weight, and high strength.

A cross-institutional team at the University of Rochester and Delft University of Technology have developed a way to produce graphene materials by mixing oxidized graphite with bacteria. The method—like that of the Australian team—could help overcome the hurdle to producing graphene in large quantities for next-generation applications.

This new research also was inspired by other previous work, which already identified a certain type of bacteria as a good way to produce graphene-like materials, acknowledged Anne Meyer, associate professor of biology at the University of Rochester.

“We were inspired by some earlier papers that showed that you could mix together a graphene precursor with the bacteria Shewanella oneidensis,” she told Design News. “These earlier papers showed that the bacteria can change the chemistry of this graphene precursor to be more graphene-like, but it was totally unclear if this new material would be in any way suitable for materials applications--whether it was electrically conductive, or able to be used over long periods of time.”

Scientists long have known that the nanomaterial graphene is incredibly useful for creating new and more efficient computers, medical devices, and other advanced technologies. However, production of the material is typically a time- and resource-consuming process that requires the use of toxic materials, which is inspiring researchers to find other ways to do it.

To make graphene on a larger scale, there also is another approach that uses chemicals, “but this technique is very harsh and energy-intensive,” she told us.

The procedure Meyer and her team devised is far simpler and less energy intensive, nor does it require the use of toxic chemicals. Researchers started with a vial of graphite, which they exfoliated until they produced graphene oxide. Then they mixed with the bacteria Shewanella and the rest of the process happens organically overnight, Meyer told Design News.

“In our procedure, all we have to do is mix together our bacteria with some of the graphene precursor material and leave it sitting on the benchtop overnight at room temperature,” she told us. “The next morning, the new graphene material will be ready. This procedure is inexpensive, easy, and very environmentally-friendly.”

Moreover, the graphene produced using bacteria are thinner and can be stored longer, she added.

Researchers published a paper on their work in the journal ChemOpen.

Another benefit of the graphene materials Meyer and her team produced are that they can easily have functional groups added to them, which makes them well-suited to developing new devices, she told us.

“They could be used for example as a field-effect transistor (FET) biosensor,” Meyer told Design News. “For this type of device, you want a conductive material onto which molecules have been attached that can detect specific biomolecules. Our material could be used therefore as a lightweight, flexible device for detecting biomolecules such as blood sugar or infectious agents.”

The materials’ longevity when stored while retaining electrical conductivity also makes them conducive to producing conductive inks for printed electrical circuits and other electronics, she added.

So far the team has only been able to produce milliliters of graphene from the materials; however, in the future researchers hope to produce liters of the materials and see their use in real-world applications, Meyer told Design News.