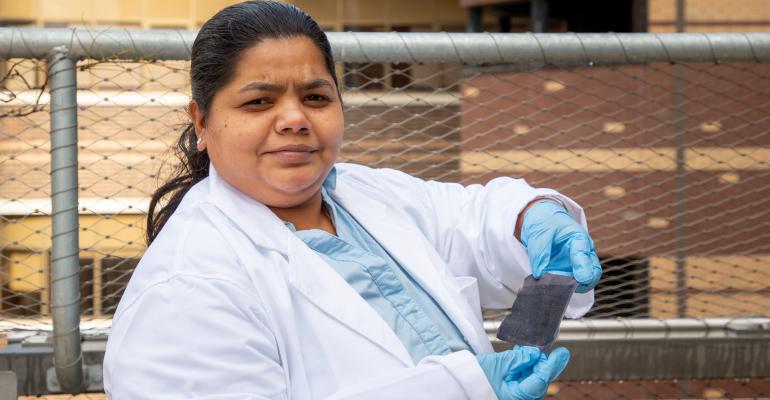 Researchers have developed a method for laser-printing smart, waterproof fabrics within minutes.

So-called “smart fabrics” that have sensing, wireless communication, or health-monitoring technology integrated within them are the wave of the future for textile design, which is why researchers have been working on new ways to improve their design and fabrication.

Now a team from RMIT University in Australia have done just that with new technology that can rapidly fabricate waterproof smart textiles with integrated energy-harvesting and storage technology that precludes the need for a battery, researchers said.

Indeed, this is one of the challenges to developing smart textiles—a power source that doesn’t burden the wearer or is user-friendly, said Litty Thekkakara, a researcher in RMIT’s School of Science who worked on the project.

“By solving the energy storage-related challenges of e-textiles, we hope to power the next generation of wearable technology and intelligent clothing,” she said in a press statement.

Specifically, Thekkakara and her colleagues have developed a method for fabricating a 10-by-10 centimeter waterproof, flexible textile patch with graphene supercapacitors directly laser-printed onto the fabric.

The invention is an alternative method to current processes for developing smart textiles, which have which have some limitations, she said.

“Current approaches to smart textile energy storage, like stitching batteries into garments or using e-fibers, can be cumbersome and heavy, and can also have capacity issues,” Thekkakara said in a press statement.

The electronic components also can be in danger of short circuiting or failing when they come in contact with sweat or moisture from the environment if the textile isn’t waterproof, she added.

The team tested their invention by connecting the supercapacitor with a solar cell to create a self-powering, washable smart fabric. Tests analyzing the performance of the fabric showed it remained relatively stable and efficient at various temperatures and under mechanical stress, researchers said. Researchers reported these findings in an article in the journal Scientific Reports.

The team envisions the e-textile being used in novel wearable technology, which is currently being developed not only for consumer-fitness applications, but also for specialized clothing in medical and defense sectors for health monitoring and safety tracking, respectively.

The laser-printing method also paves the way for new, more advanced fabrication of next-generation smart textiles that can integrate intelligence in the process itself, said Min Gu, RMIT honorary professor and distinguished professor at the University of Shanghai for Science and Technology

“It also opens the possibility for faster roll-to-roll fabrication, with the use of advanced laser printing based on multifocal fabrication and machine learning techniques,” he said in a press statement.