Inventor of the Super Soaker Gets Serious 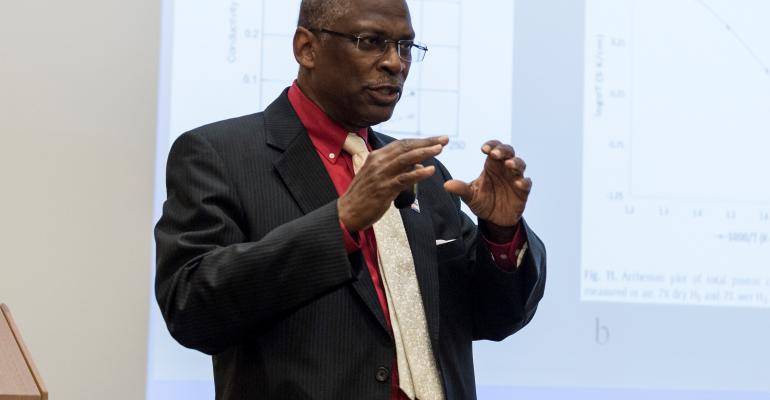 Golden Mousetrap Lifetime Achievement Award winner Lonnie Johnson is forging ahead with plans to build better batteries for the transportation industry, thanks to his mammoth success with Super Soaker toys.

Lonnie Johnson recalls sitting in his machine shop 30 years ago, wondering if it was time to give up on his quest to bring a powerful new water gun to the toy market. By that time, he had written letters to more than 75 toy manufacturers and retailers. He had visited countless offices, worked with a sea of executives, built numerous prototypes, and repeatedly explained and re-explained the manufacturing process. And he hadn't made a dollar off it.

“It was very frustrating,” he told Design News recently. “It got to the point where I was thinking, ‘Maybe this isn’t meant to be. Maybe it’s time to look for something else.’”

Johnson, the recipient of the 2019 Golden Mousetrap Lifetime Achievement Award, fortunately overcame that temptation to quit. In 1989, he found a manufacturer. A year after that, his Super Soaker toy hit the market. By 1992, it had become the number-one-selling toy in the world.

Life as an Inventor

For Johnson, however, the 10-year period leading up to that amazing success was a rocky one. It was an introduction to the tough, unpredictable, maddeningly illogical life of the independent inventor. It was a life full of closed doors — a life for which Johnson had not been completely prepared.

A design engineer by trade, Johnson had worked for the US Air Force and the NASA Jet Propulsion Laboratory prior to his invention of the Super Soaker. He had developed electrical devices and nuclear power energy systems for the Galileo spacecraft. He had participated in the design of the Stealth Bomber.

But in 1982, everything changed. While working on a new kind of heat pump design for refrigerators, he tested out a valve in his bathroom sink. Water trickled into the valve, then spurted across the room, splattering against the wall. Watching the water drip down the tub wall, Johnson immediately thought water gun. He built a prototype gun for his daughter, who showed it to her friends, who loved it.

At that moment, his life changed. He saw the potential for commercial success, for an ongoing stream of resources that could help support the development of his army of other technical ideas. He’d been bitten by the invention bug, the bug that author Tom Wolfe had once said “allows a man to transform his life overnight and light up the sky.”

Johnson considered manufacturing the toy himself, but soon learned that he would need $200,000 for production tooling. As a captain in the US Air Force, however, he didn’t have ready access to that much disposable cash. So Johnson drove to the library and began combing through trade journals, in search of toy manufacturers and retailers. He identified between 75 and 100, then started writing letters.

“My conscious decision was to license it — to work with a company to get it into production,” he said. “And if someone stole it, then they stole it. But at the very least, I would learn something.”

In his mind, the squirt gun’s concepts were simple and unique, but nonetheless unexplored by others. All were grounded in everyday physics. Inside the gun, he used tubing with a large cross-sectional area to reduce head loss. He employed a small-diameter pump to minimize the required force, so a small child could operate it. He applied pressurized air to force the water from the gun in a powerful, high-velocity stream. And he made sure that the water flowed directly from the gun’s pressurized reservoir to its nozzle, minimizing potential pressure losses along the way.

Still, toymakers didn’t beat a path to his door. Most didn’t respond to his letters. A few, including Hasbro Inc. (the company that ultimately made almost $1 billion from the Super Soaker), rejected his pitch. Eventually, a BB gun manufacturer expressed interest. Its engineers examined the prototype, dismantled it, and then fell out of touch. When Johnson asked for the gun back, they said they didn’t know how to reassemble it. Another toy manufacturer showed interest, but only on the condition that Johnson license another of his ideas for a water-powered model airplane. The airplane, called Jammin’ Jet, reached the commercial market, but ultimately failed, causing the company to balk at the water gun.

As the years passed, Johnson began to question the wisdom of continuing his efforts. ‘I remember sitting in my shop, working and thinking, ‘I can come up with ideas, and I have the skills to make what I conceive, so why is it so hard?’” he recalled. “’Why is it taking so long to achieve success?’”

In retrospect, Johnson’s life as an independent inventor had always seemed predestined. Growing up in Mobile, Ala., he’d been a latchkey kid, spending prodigious amounts of time alone at his grandmother’s house, figuring out how things worked. Once, he reverse-engineered his sister’s baby doll to understand how the eyes opened and closed. Another time, he nearly burned down his family’s house while trying to make rocket fuel. He loved the 1940 Mickey Rooney film, Young Tom Edison.

“I related to Thomas Edison in a big way, because I was always doing kooky stuff, getting into trouble, and not having people understand what I was doing or why I was doing it,” he said.

Still, his talent was eventually recognized. In high school, he built a compressed-air-powered robot called “Linex” that took first prize in an Alabama state science fair. It was a remarkable achievement at a time when African-Americans were seriously underrepresented in the sciences. He went on to receive a math scholarship from Tuskegee University, a historically black college. There, he earned a bachelor’s degree in mechanical engineering and a master’s in nuclear engineering.

Those factors, however, didn’t ensure his success in the fickle, frantic toy industry. They only reinforced his resolve. In 1989, seven years after dreaming up the idea for the squirt gun, he attended the American International Toy Fair in New York City. There, he met an engineer from Larami Corp. who invited him to bring his toy gun to the company’s Philadelphia headquarters.

In preparation for the meeting, Johnson went back to his workshop and built a new prototype. Using a plastic soda bottle, PVC pipe, and plexiglass, he fashioned a gun on a Unimat SL hobby lathe. He even machined his own check valves, using spare O-rings and little pieces of rubber from an inner tube.

When Johnson arrived at Larami, the gun first drew curiosity. When he demonstrated it, however, the curiosity turned to gasps. The gun propelled water across the conference room, splattering it against the wall. “When I shot it across the room, Myung Song, the company’s president, said, ‘Wow.’ Then they all started brainstorming, talking about price points. I realized then it had captured their imaginations.”

Within a couple of years, the squirt gun, known by the commercial name of Super Soaker, was an enormous seller. Sales soared to two million units in 1991, then to $200 million in ’92, making the Super Soaker the top-selling toy in the world. Tonight Show host Johnny Carson even used one on the air to douse co-host Ed McMahon. Super Soaker was now a globally recognized product name, even among people who had never laid eyes on one.

By ‘95, Johnson’s story had even added an “I-told-you-so” twist. Hasbro Inc., the company that had initially rejected his idea, acquired Larami. Johnson subsequently designed a Nerf version of the gun, boosting the toy’s already extraordinary sales … for Hasbro. Johnson earned millions of dollars in the process, and later added to that sum after he was awarded more cash in a royalty settlement with the toymaker.

It was now official: Lonnie Johnson’s idea for a squirt gun had exceeded even his own optimistic expectations. He was a model of success for independent inventors, accomplishing in a decade what few could hope for in a lifetime. He was, as Tom Wolfe might have said, “lighting up the sky.”

Johnson, however, didn’t see his success as an end, but rather a means to an end. Today, he uses the resources from the Super Soaker to fund technical projects at his company, Johnson Research & Development.

His current projects include a solid-state lithium battery for the transportation industry, which places him toe-to-toe with giant lithium battery manufacturers, such as Panasonic Corp. Being the little guy in the scrap, however, doesn’t intimidate Johnson. He’s making a solid-state electrolyte using ceramic processing techniques — casting and sintering in ovens — to create a more manufacturable battery. In essence, it’s like making pottery, he said.

“It looks like we now can achieve twice the energy density of lithium-ion,” he told us. “It’s been a long hard slug fight and it has taken most of my resources, but now we’re starting to look for strategic partners.”

He’s also tapping into his NASA JPL experience to develop an engine that converts heat to electricity, as well as a battery with a lithium-air chemistry. The lithium-air unit, he hopes, will solve the problems that have made other companies, such as IBM, balk at going further.

Over the years, his patent total has soared to 137. And he expects that number to keep growing.

And that’s the key for all independent inventors, he said: Keep churning out ideas and take the risk of exposing those ideas to the world. “A long time ago, my realization was, you can’t make any money if no one knows about your invention,” Johnson told us. “That’s always a challenge for independent inventors — they’re afraid to show their product for fear someone might steal it. But you’ve got to do it.”

Johnson said he’s not concerned that his well will ever run dry. “My objective is always to learn,” he said. “I have more things to work on than I have the time to work on them. There will always be more ideas.”