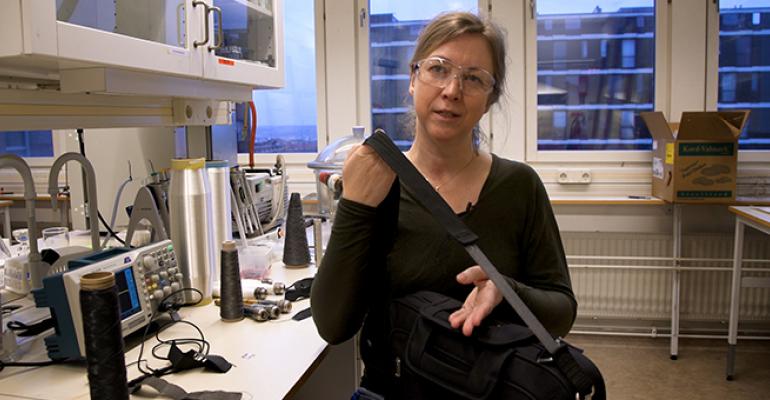 A research team at Chalmers University of Technology, in collaboration with the Swedish School of Textiles, has invented an energy-generating fabric that’s flexible and works more efficiently when more weight is placed on it or it’s wet.

Our backpacks and workout clothes potentially have a new way to provide mobile power thanks to a team of researchers at Chalmers University of Technology, in collaboration with the Swedish School of Textiles in Sweden. The researchers have developed an elastic fabric that is turns kinetic energy into electricity. The fabric is flexible, soft and works more efficiently when more weight is placed on it or it’s wet or under a heavy load. The researchers published a paper on their work in the Nature partner journal Flexible Electronics.

Chalmers researcher Anja Lund, told Design News the team tested the fabric’s former characteristic by including a piece of it in the shoulder strap of a bag.

“The heavier the weight packed in the bag and the more of the bag that consists of our fabric, the more electric power we obtain,” Lund explained. “When our bag is loaded with three kilos of books, we produce a continuous output of four microwatts.”

That yields enough power to intermittently light an LED, Lund said, adding that if more of the bag was comprised of the textile, it could provide electricity for applications with even greater energy needs. “By making an entire bag from our textile, we could get enough energy to transmit wireless signals,” she said.

​The energy harvesting aspect of the fabric is based on the piezoelectric effect, which creates electricity from deformation of a piezoelectric material—such as when it’s stretched. To create the fabric, the team wove a piezoelectric yarn together with an electrically-conducting yarn, which is required to transport the generated electric current. The yarn is comprised of 24 fibers, each one as thin as a strand of hair.

The researchers had previously developed piezoelectric textiles, but only with a focus on sensors and their ability to generate electric signals through pressure sensitivity, Lund said. The new work builds on this by using the energy to continuously provide power to electronic components, which is unique to the work so far.

“Woven textiles from piezoelectric yarns makes the technology easily accessible and it could be useful in every-day life,” Lund said. “It’s also possible to add more materials to the weave or to use it as a layer in a multi-layer product. It requires some modification, but it’s possible.”

Researchers said the fabric already can scale for mass construction at a cost that is comparable to the price of the material Gore-Tex, which is already used for active and outdoor wear. Lund said their hope is that industrial product developers will find ways to use the material in new products.