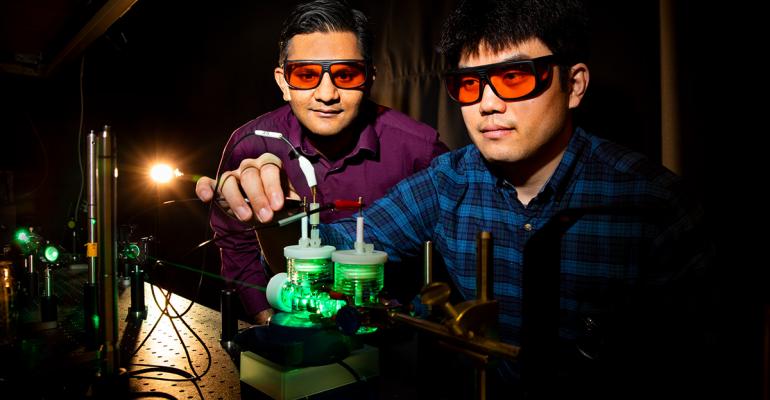 Researchers have developed a new method that uses water, carbon dioxide, and visible light to produce liquid fuels, including environmentally friendly ones.

The research—led by Prashant Jain, a chemistry professor at the University of Illinois at Urbana-Champaign—is unique in that it is a direct “solar-to-fuel” conversion that does not require the use of an electrochemical cell, he told Design News.

“What is special about our recent work is that we use nanoscale structures have an exceptional ability to trap visible light and use it to drive the conversion of carbon dioxide to energy-rich hydrocarbons,” Jain said.

Plants use sunlight to create chemical reactions between water and carbon dioxide to create and store solar energy in the form of glucose. Jain and Sungju Yu, a postdoctoral researcher, developed an artificial process that uses the same green-light portion of the visible light spectrum that plants use during natural photosynthesis to convert carbon dioxide and water into fuel.

Unlike other artificial photosynthesis processes, the one the researchers developed does not use a sacrificial agent to achieve the conversion, Jain told us.  The system, however, does use a catalyst in the form of electron-rich gold nanoparticles to create the reaction.

“In our system, water gets oxidized and harvested for protons, similar to what happens in photosynthesis,” he said. “Secondly, the gold nanostructures used as the photocatalyst do not degrade under visible light excitation, so they can be used in cyclic manner without the need for regeneration.”

Jain described how the process works to Design News. Researchers shine focused green light onto a light-absorbing catalyst film—comprised of gold nanoparticles supported on a polymer—immersed in water saturated with carbon dioxide, he said.

“The water medium contains a small volume fraction of a room-temperature ionic liquid, which promotes the catalytic activity because it restructures the carbon dioxide and making it more reactive,” Jain explained. “The gold nanoparticles absorb green light very efficiently. The absorbed light results in the production of energetic charge carriers within the gold nanoparticles.”

These energetic electrons are then transferred to carbon-dioxide molecules bound to the surface of the gold nanoparticles, with the particles handing off the energetic charges to the carbon dioxide.

“Energetic holes are transferred to water molecules bound to the surface of the gold nanoparticles, which triggers the oxidation of water resulting in the generation of protons,” Jain explained. “The energized charged derivative of carbon dioxide accepts protons and additional electrons from the gold nanoparticles to form hydrocarbon fragments, which can bond with each other to form [various gases.]”

Among the fuels generated in this process are methane, or natural gas; ethylene; acetylene; propene; and propane, he said. The process also generates hydrogen, which is a clean fuel that upon combustion does not lead to carbon-dioxide emissions, Jain added. Researchers published a paper on their work in the journal Nature Communications.

The team hopes its research will eventually lead to the complex, liquefiable hydrocarbons from excess carbon dioxide and other sustainable resources such as sunlight, Jain said. These fuels are easier, safer, and more economical to transport than gas in addition to packing more energy density, he said. They also can help reduce carbon-dioxide emissions.

“In particular, it would be ideal to use sunlight, carbon dioxide, and water—all abundant resources—as sources for fuel production,” Jain said. “The recycling of carbon dioxide back to hydrocarbons also effectively functions to reverse carbon-dioxide emissions. This is essentially how the plant kingdom helps maintain a balanced carbon cycle.”

Researchers plan to continue their work to tune the catalyst they use to increase the efficiency of the chemical reactions so they can scale the process up for volume manufacturing, Jain said.

“We would also like to mitigate bottlenecks that currently exist in the conversion of light energy into energy-rich bonds,” he said. “Through improved materials design and tuning of the reaction conditions, it may be possible to improve the efficiency of this conversion and the production yields of the fuel.”