Anything Can Become a Robot Using Technology from Yale 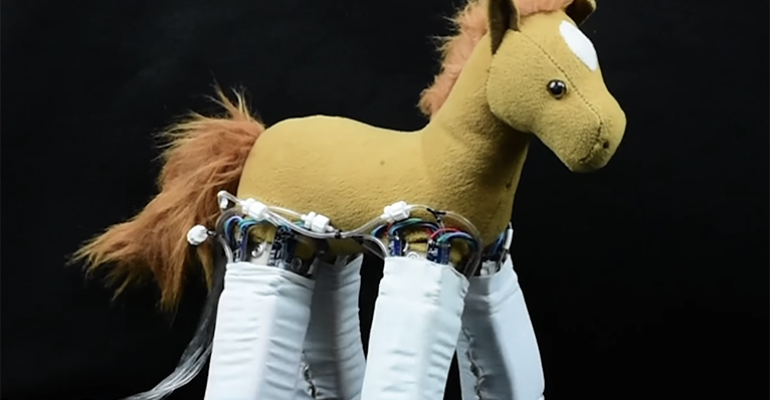 Researchers have developed a robotic skin that can turn everyday objects—from stuffed animals to crumpled pieces of paper—into robots.

Robots are starting to make their way into our homes through inventions like the Roomba vacuum cleaner and other inventions. Now, researchers at Yale University have developed technology that can animate common objects into self-actuation to create robots out of pretty much anything. At the Yale laboratory of Rebecca Kramer-Bottiglio, assistant professor of mechanical engineering and materials science, the team has developed robotic skins comprised of elastic sheets embedded with sensors and actuators.

Unlike many robots built today, the skins weren’t developed with any particular task in mind, Kramer-Bottiglio said in a Yale news release. Instead, they can be placed on any deformable object—such as a stuffed animal or a foam tube—to animate these objects from their surfaces to perform different tasks, depending on the properties of the soft objects and how the skins are applied, she said.

“We can take the skins and wrap them around one object to perform a task—locomotion, for example—and then take them off and put them on a different object to perform a different task, such as grasping and moving an object,” she explained. “We can then take those same skins off that object and put them on a shirt to make an active wearable device.”

In this way, people can use the technology to create robots that can perform a variety of functions almost spontaneously, paving the way for new types of devices and uses for those devices in numerous settings and applications, Kramer-Bottiglio stated.

The Yale team partnered with U.S. aerospace agency NASA on the development of the robotic skins. Indeed, it was a call by NASA for soft robotic systems that inspired Kramer-Bottiglio to invent the technology, which has potential for use by astronauts to accomplish various tasks with the same reconfigurable material.

“One of the main things I considered was the importance of multifunctionality—especially for deep space exploration, where the environment is unpredictable,” Kramer-Bottiglio said. “The question is: How do you prepare for the unknown unknowns?”

NASA and the Yale team envision that the robotic skins can be used on board the International Space Station or other spacecraft during missions to help the astronauts create a diverse range of robotic devices out of anything—from balloons to balls of crumpled paper—depending on their need. For instance, the same skins used to make a robotic arm out of a piece of foam could be removed and applied to create a soft Mars rover that can roll over rough terrain, researchers said.

Moreover, people can use the skin to give these insta-robots more complex movements by using more than one skin in a layering effect that allows for different types of motion, Kramer-Bottiglio said. “Now, we can get combined modes of actuation—for example, simultaneous compression and bending.”

The team developed a number of prototypes to demonstrate their research in action, including foam cylinders that move like an inchworm, a shirt-like wearable device designed to correct a person’s posture, and a device with a gripper that can grasp and move objects. Researchers published a paper on their work in the journal Science Robotics.

Using a $2 million grant recently awarded to Kramer-Bottiglio by the National Science Foundation (NSF), she and her researchers will continue working to streamline the devices and explore the possibility of 3D printing the components, she said. The grant was given to her as part of the NSF’s Emerging Frontiers in Research and Innovation program.