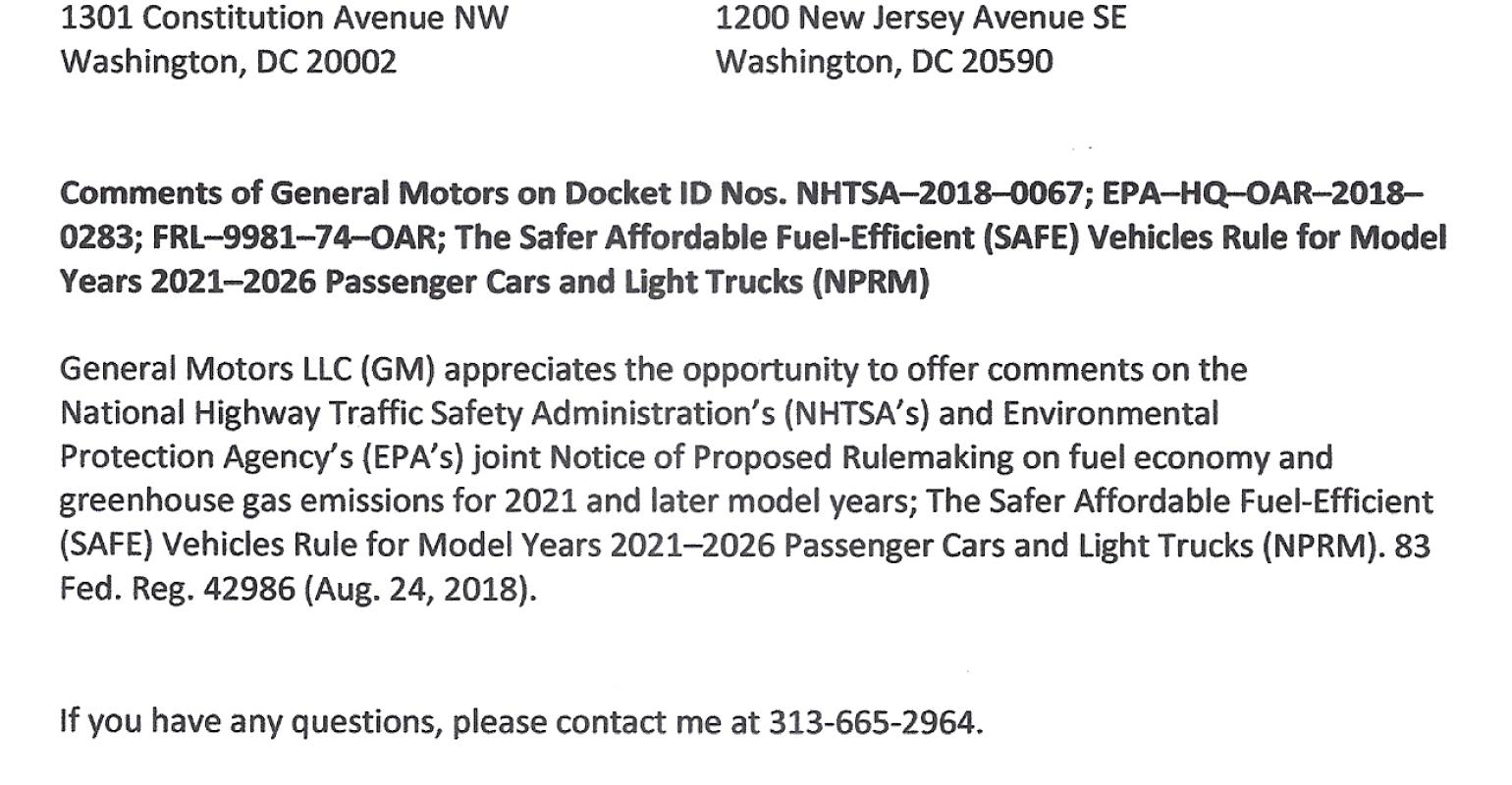 General Motors’ much-publicized desire for a national electric car mandate is rooted in the company’s opinion that EVs are the future of transportation, as well as in its belief that the Obama-era fuel efficiency rules were flawed.

In a comment filed on the US Department of Transportation’s rulemaking site last week, the giant automaker wrote that the Obama mandate was “not technologically feasible or economically practicable.” The 2012 mandate, which called for the industry to hit an average fuel economy of 54.5 mpg by 2025, would make “new vehicles more expensive, reduce demand and jobs, and provide fewer CO2 reductions relative to the substantial costs required,” the automaker wrote in a letter filed on October 26th.

In GM’s view, the crux of the problem with the original 54.5-mpg mandate was that it called for the industry to accelerate its gasoline engine efficiency beyond a “historic” and reasonable norm. GM wrote that “since 1980, industry has improved the fuel economy of a predominantly internal combustion fleet at an average rate of 1%/year.” The Obama mandate called for automakers to go well beyond that historic rate, GM said.

Still, industry analysts familiar with the matter said last week that the automaker is sincere in its belief that EV technology is getting closer to economic maturity. “It definitely seems like they’re trying to do the right thing here,” Sam Abuelsamid, senior analyst for Navigant Research, told Design News.

A Turnabout for GM

Many in the industry were shocked by last week’s news—especially in light of GM’s dubious history with electric cars. During the 1970s, GM launched a program to build an all-electric vehicle called the Electrovette, only to quickly abandon it. And during the 1990s, it made another failed attempt at electrification with the all-electric EV1. The EV1 became a blemish on the company’s historical record after GM crushed most of its remaining vehicles.

Moreover, the company was dead set against the California ZEV mandate in its early years. “If you look back at GM’s history through the 1990s and early 2000s, they were very much opposed to any mandates,” Abuelsamid said. “In some cases, they were opposed for logical reasons. Frankly, the technology back then was not very viable.”

But GM’s recent experiences with the Bolt EV have bolstered its confidence in the technology. And concerns over the Obama mandate apparently inspired the automaker to take a big step forward and call for a national policy.

Until last week, most automakers had been quietly opposed to the 2012 Obama mandate. In most cases, they let industry organizations, such as the Alliance of Automobile Manufacturers and Global Automakers, take public positions for them. The Alliance of Automobile Manufacturers, which includes Ford, General Motors, Toyota, Volkswagen, and eight other big automakers, applauded the Trump Administration’s efforts to dismantle the Obama rules. Similarly, Global Automakers, which includes Honda, Nissan, Kia, Hyundai, and others, came out in favor of a change.

Analysts said last week that most of the member companies were concerned about the final years of the Obama mandate. “In 2020 and 2021, the industry knew it was going to be in trouble if it didn’t change pathways quickly,” said Brett Smith of the Center for Automotive Research. “The path they were on with regard to tailpipe emissions and EPA credits was not a good one for them.”

Still, inaction was not seen as a realistic alternative for automakers—even with the Trump Administration’s support for the industry. “It’s getting harder and harder for companies to sell against environmentalism,” Smith told us. “Being seen as a non-environmentally friendly company or industry can be a real problem.”

GM’s goal is to bring a facsimile of the California ZEV mandate to the rest of the country. Doing so would provide three benefits to GM and possibility others in the industry. First, it would deliver a single government policy, instead of two separate policies, to all companies that sell in the US. Second, it would prevent a protracted and ugly legal battle with the state of California. And third, it would encourage EV development by American companies, enabling them to more cost-effectively compete with foreign automakers that are ratcheting up sales in China and elsewhere.

In the meantime, the move away from the 54.5-mpg mandate would enable GM and others to sell big gas-burning vehicles—SUVs and pickups—and continue to meet the needs of a large portion of their customers. In that regard, GM said that it plans to squeeze more fuel efficiency out of its internal combustion engines, but at a less aggressive rate than is called for by the 54.5 standard.

To be sure, the move toward electric powertrains is still an uphill battle for many automakers, largely because they are unsure about consumer demand. “For consumers, the economics of owning an EV are still challenging,” Abuelsamid said. “The cost differential, compared to an ICE (internal combustion engine) vehicle, is more than they’re likely to save in operating costs over the life of the vehicle.”

Analysts said that if American consumers were snapping up EVs in large numbers, GM would have been highly unlikely to call for a national mandate. But the ambivalence of American consumers suggests that government policy is needed. “Clearly, there has to be some government incentives for these vehicles to be accepted on a mass scale,” Smith said.

Still, many in the electric vehicle community felt GM’s announcement last week didn’t go far enough, leaving American automakers behind their foreign counterparts in China and elsewhere. Analysts told Design News, however, that stronger mandates, like those in China, would be unlikely to be accepted by US consumers and voters. “America is still a democracy,” Abuelsamid said. “Governments here can’t deal as aggressively as China can in imposing new mandates.”

Either way, many in the industry see GM’s move as another sign that EVs are gaining acceptance. “It’s important,” Smith said. “It’s a realization that ZEV policy is part of the landscape now.”