Last week’s news that Chevrolet will take its all-electric Bolt concept car to production could be a sign that there's a step-change in EV battery technology on the horizon.

The news, announced at the Chicago Auto Show on Thursday, included few specifics, but it provided a clear signal that it’s now possible to build an electric production car that can travel 200 miles on a charge, while costing less than $40,000. Buoyed by this newfound capability, General Motors said it will waste no time in bringing the car to the market. “We are moving quickly because of its potential to completely shake up the status quo for electric vehicles,” GM North America president Alan Batey said in a press release. 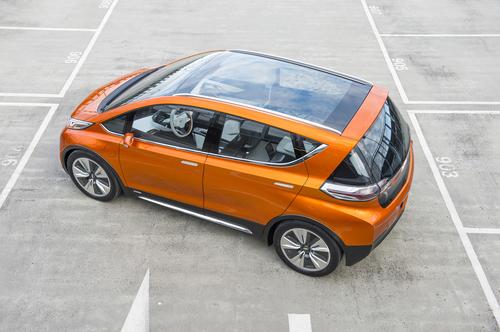 Industry analysts said they expect the car’s actual price to be close to the $40,000 mark. The oft-quoted $30,000 figure, they said, takes into account federal rebates of $7,500 or more, as well as potential state discounts. Lux Research predicts the car will reach the market some time in 2017 or 2018, while LMC Automotive said it expects production to begin in October 2016.

The 200-mile range and sub-$40,000 cost are important because they represent a battery improvement that could affect the entire plug-in market. “To pack 200 miles of driving range into a $40,000 price range is better than anything that’s out there right now,” Cosmin Laslau, research analyst for Lux Research, told Design News. Laslau added that one battery maker has told him that its cell price will drop from $360/kWh today to $200/kWh by 2017. During the same timeframe, it expects specific energy to rise from 160 Wh/kg to 250 Wh/kg.

Analysts don’t foresee those numbers resulting in a huge surge, but they do believe electric vehicle sales numbers will grow. “Right now, electric vehicles still represent less than 1% of the sales in the US,” Laslau told us. “If they can improve to 3% or 5%, it would be seen as a win.”

LMC Automotive predicts that sales of the Bolt will top out at about 34,000 vehicles in 2017 and decay after that. “There will be competition, not only from other electric vehicles, but from hydrids, as well,” Bill Rinna, senior manager for North American forecasts at LMC Automotive, told us. “At the same time, IC engines are getting better and fuel prices are not expected to rise significantly.”

To be sure, not everyone foresees a big battery improvement on the horizon. “I haven’t yet seen a step-function change,” said Jeremy Michalek, professor of engineering and public policy at Carnegie Mellon University. “It’s more a matter of incremental changes -- a lot of little improvements being added together.”

No one is sure how low the price of batteries can go. Right now, it’s believed that cell design, battery chemistry, and production volume will all contribute to the drop in cost. Some experts suggest, however, that the effect of production volume will be limited. A 2014 study by Carnegie Mellon University contended that economies of scale will be exhausted beyond 200-300 MWh of production. If true, it would mean that Tesla’s so-called Gigafactory, which has a purported annual capacity of 35 GWh, would never reach its ambitious cost targets.

Some analysts suggest that the future of batteries may lie more in plug-in hybrids than in pure electric vehicles. BMW, Audi, and Mercedes-Benz are all said to be planning to spread the option for plug-in capabilities across their entire model lines. If consumers warm to the idea, it would mean that the demand for smaller batteries, possibly sized at 10-15 kWh, would rise.

The bottom line is that the market for EV batteries is likely to grow. ”This is definitely going to move the needle forward,” said Laslau of Lux Research. “It’s not the kind of sudden transition that Elon Must wants to see, but it’s an important change, and it’s happening gradually.”

Your direct link to advanced design and manufacturing products and suppliers
Search for products & manufacturers:
Next Class: Coming Soon
END_OF_DOCUMENT_TOKEN_TO_BE_REPLACED

Please wait a moment while we find a poll.
END_OF_DOCUMENT_TOKEN_TO_BE_REPLACED