HomeElectronicsFaraday Future's vision for cars is as unsettling as it is novel
Recent
Electronics
Halloween? What a Perfect Time to Think About Generating Electricity From Blood!
Oct 27, 2021
Ghosts of Medtech: What Ever Happened to These 7 Medical Devices?
Oct 27, 2021
How to Survive a Zombie Apocalypse
Oct 27, 2021
America's Supply Chain Crisis by the Numbers
Oct 27, 2021
POLL
Want Scary Stuff for Halloween? Check out the Tech for 2021
Oct 27, 2021
How Apple Influenced Medical Packaging
Oct 27, 2021
AAA Finds that ADAS Sensor Vision Permits Crashes 33 Percent of the Time in the Rain
Oct 27, 2021
What Do SAE Automated Driving Levels Mean Anyway?
Oct 27, 2021 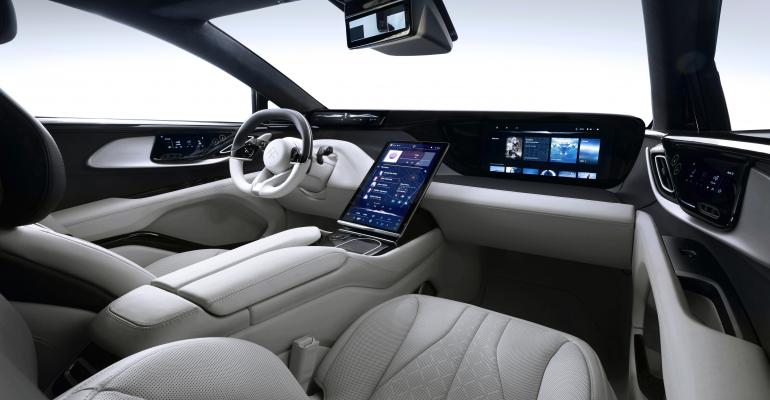 Faraday Future says its FF 91 will be your “third internet living space.” But what are consumers willing to put up with for the experience?

A car as comfortable as a living room sounds like a luxury, but it could also be a hell on wheels.

When Faraday Future announced it would have a presence at the 2019 Automobility LA conference, it was easy to expect the troubled startup might finally be unveiling a production vehicle. Instead, company CEO Carsten Breitfeld pitched a radical vision for a world in which cars become mobile, internet-enabled living spaces that combine the best features of your living room, office, and your smartphone.

To be fair, according to its own marketing Faraday Future (FF) is not a an automotive company, it's a “shared intelligent mobility ecosystem company.” And the company doesn't want its upcoming “ultra-luxury” vehicle, the FF 91, to just be your next car. The FF 91 is meant to be what FF calls “the third internet living space.” (The other two spaces are your home and workplace.) “Faraday Future’s mission is to change the concept of digital life when we are in our vehicles,” the company said.

“We are now living an increasingly busy lifestyle, and we demand to be continuously connected anytime and anywhere. As we typically travel between home and our destinations every day, the car provides a safe and comfortable means of transportation, however, the time in transit is often considered 'down' time. FF is here to change that,” Breitfeld said. “Our goal is to make your daily commute the highlight of your day through a rich digital experience and give you back more time in your day.”

How fast is your new living room?

Specs released on the FF 91 were less about performance and more about how the vehicle will be engineered for maximum comfort. The seats are “Zero-Gravity Seats” that FF said were developed by borrowing principles from NASA spacecraft to evenly distribute body weight. The rear seats are each 14-way adjustable and have 4-way adjustable lumbar support. They can also recline up to 60 degrees. And if the reclining isn't enough for you, the vehicle will also feature a Spa Mode that heats and ventilates the seats and adjusts the interior lighting while playing mood music.

Other features of the FF 91 include 4G LTE connectivity via three modems dedicated to vehicle diagnostics, over-the-air updates, and infotainment respectively. The vehicle will also leverage machine learning technology, not just for autonomous driving, but also for features such as facial recognition to create custom profiles for riders. Hop in the vehicle and it will recognize you and set everything from the mirrors and seats to the climate just the way you like it.

All of this is not to say the FF 91 will be a slouch on the road. FF is promising a peak motor power of 783 kW, equating to up to 1050 horsepower and making the FF 91 capable of 0-60 mph in less than three seconds. The vehicle's 130 kWh battery will have an EPA-estimated range of 378 miles. FF says the FF 91 will be able to charge at a rate of more than 500 miles per hour.

Oh, and there will be 11 screens inside of this thing – including a heads-up display, instrument panel, and an ultra-wide, 27-inch HD screen that descends from the roof.

Given the FF 91 is not fully autonomous, it's not likely anyone will be taking advantage of all these screens and features without a chauffeur – or at least a very loving family member willing to drive while you sit back in Spa Mode.

A smartphone on wheels

FF says it will be delivering the first batch of FF 91's later this year, first to the Chinese market (FF expects China to be its biggest market), at a price of about $317,000 US. But listening to company CEO Breitfeld, it was clear FF is taking fewer cues from traditional automakers and modeling itself more after Apple. In so many words Breitfeld told the Automobilty LA audience that FF would like to do for personal travel what the iPhone did for personal communication. FF wants riders to “Do what you do on your smartphone, but in your car,” Breitfeld said.

When natural questions about the company's growth strategy came up during his talk, Breitfeld said the company's “business case is still mobility...but that may change in the next five years.”

Breitfeld said he believes FF brings an expertise in both automotive and software development that goes beyond the typical partnerships seen between Apple and Google and major automakers for services like CarPlay and Android Auto. “You need software, but you also need car technology – no other company is bringing that together,” he said. He went on to talk about how Silicon Valley and automotive cultures haven't particularly meshed well – particularly when it comes to sharing data. “Everyone wants to own the data; tech and auto will always fight over data.”

Turning your car into an app store

What FF really wants to do is turn that downtime you spend in your car into digital revenue. If FF's cars become fully autonomous someday that offers ample opportunity for riders to be productive or entertained on their ride. And that suggests an app ecosystem similar to what already exists for the iPhone. It makes sense if you're following the Apple model – consumers spent an estimated $25.5 billion globally in the Apple App Store in the first half of 2019 alone, and Apple gets a piece of every app sale.

Consumers already use their cars' infotainment systems for watching movies and playing games so what FF is envisioning is not much of a stretch. Add in a slew of new car-based productivity apps that would surely emerge if demand arose and it's easy to imagine the FF 91 becoming a home office or living room on wheels.

The contrast to that though comes when you consider the current ecosystem of smartphone apps. Even paid apps continuously build revenue by running ads or offering paid, premium features. Mobile games in particular are guilty of bilking users with endless microtransactions designed to drain your pockets one small sum at a time. It's a practice so controversial that it has politicians and lawmakers getting involved.

Now, consider how your personal data factors into this. The features of the FF 19 could faciliate the capture of some very interesting data, which could be very valuable if sold to marketers. If your car can recognize your face and store other person data you could be seeing targeted ads in your vehicle not unlike the ones that follow you while your browse the internet. Companies could conceivably even sell ad time based on the length of your commute or the businesses you pass on your route. What if hitting a red light triggered an ad that ran as long as you were stopped?

Even with the ability to turn your screens off, the one advantage your car has over your office or home for marketers is that you become a much more captive audience in your third living space. And 11 screens makes for a lot of places to capture eyeballs.

We're probably a long way from being able to tell whether the FF 91 concept will help usher in a new mode of mobility and productivity, or whether it will devolve into a four-wheeled hellscape of pop-up ads. But if FF's model proves successful, it won't take long before other players in the space adopt the same practices.

“Everything about our cutting-edge vehicle and technology was created to make the lives of our users more connected, more engaging, and more effortless,” Breitfeld said. “At the end of the day, we designed our AI and user interaction to be as intuitive and convenient as possible, giving you back more of your invaluable time.”

FF clearly understands that time is money. The question for the FF 91, and vehicles like it, is what price we're willing to put on ours.