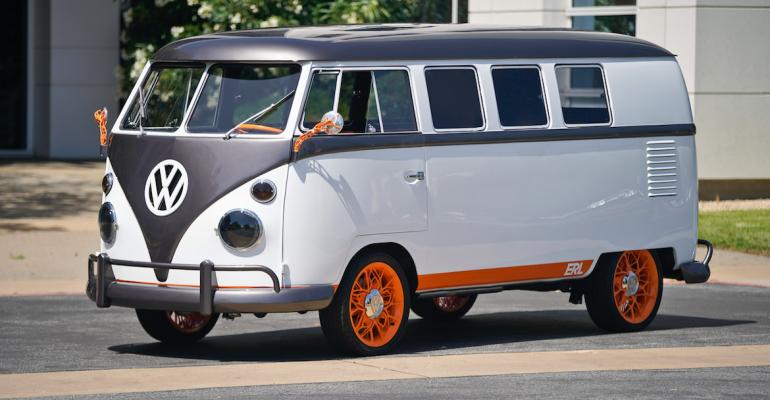 VW and Autodesk work together to create an electric microbus that includes parts created through generative design.

Volkswagen Group recently unveiled the results of a special project with Autodesk showing how technology is transforming automotive design and manufacturing processes. An engineering team from Volkswagen’s Innovation and Engineering Center California (IECC) reconceptualized and retrofitted an iconic 1962 VW Microbus with cutting-edge technologies such as electric propulsion and generative that are likely to play a big part of the auto industry’s future.

To rapidly design and manufacture the vehicle, the team leveraged generative design through Autodesk’s Fusion 360 software. This approach allowed them to input design goals into the software, which explored all the possible solutions and generated alternative designs.

By, using generative design, the team was able to:

The generative design process was created to allow the computer to meet strength requitements while using the least about of material. “Generative design approaches design challenges holistically, by considering the load cases, manufacturing methodologies, and materials simultaneously,” Paul Sohi, technology evangelist for Fusion 360 at Autodesk, told Design News. “Generative design is able to produce parts that are ready for manufacturing straight out of the tool.”

The IECC team applied generative design to the wheels of its 1962 Type 2 11-window Microbus, completely rethinking the structure because lighter wheels not only reduce the overall weight of the car, they also lessened the rolling resistance on the tires. The new wheels are 18 percent lighter than a standard set, and the overall development time from design to manufacture was cut from 1.5 years down to a matter of months. “Generative design is able to produce parts that are ready for manufacturing straight out of the tool,” said Sohi. “In the case of VW, this is what we did to ensure the wheel met all the requirements set by VW.”

Generative design was also used to re-imagine the steering wheel, as well as the support structure for the rear bench seating and the external side mirror mounts. “Different materials were used depending on the application. The wheels are cast in Alu T7, while the mirrors, steering wheel, and seat bench area are made of high-strength 3D printable plastics,” said Sohi.

Some of the components for the bus were created to provide a symbolic example of the power of generative design. While the steering wheel is not a particularly heavy component, it is the primary touchpoint for the driver. “People aren’t really accustomed to touching mounts or supports,” said Erik Glaser, principal product designer at the Volkswagen Group. “We wanted to put a generatively-designed object in a place where people will touch it because not only is it intricate and beautiful, but it can also give a sense of just how strong these parts can be.”

The swiftness of the design and production of the VW bus suggests this form of manufacturing could possibly be rolled out for production. The question remains whether generative-design parts could be used in high volume production. If so, would the parts be produced by additive manufacturing or traditional manufacturing? “That’s a question for VW,” said Sohi. “They’ve expressed interest in the continued use of generative design for applications beyond what we worked on here, so hopefully this was the first step to many new things.”