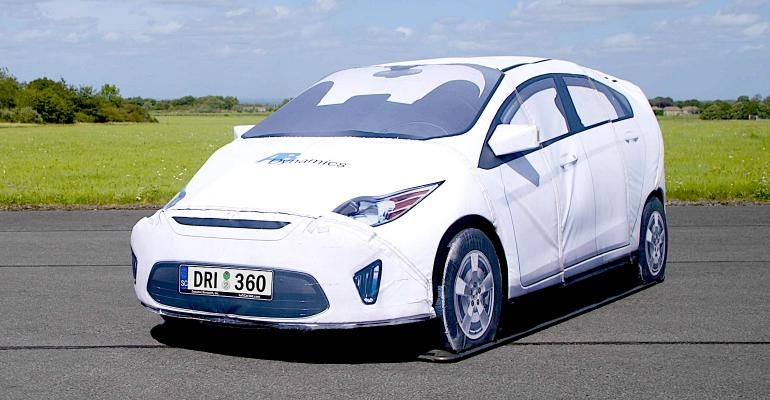 The AB Dynamics Soft Car 360 ADAS sensor target vehicle.
When things seem likely to get a little out of control, it is better to test crash-avoidance systems with something other than a real car.

“If everything seems under control, you aren’t going fast enough.” Mario Andretti observed this about the speed of race cars, but the same holds true of developing and engineering new cars. We’re trying to go as quickly as possible, and in our tests, there might be the occasional crash.

This is where AB Dynamics comes it. The company’s Soft Car 360 is a crushable target for testing Automatic Emergency Braking systems developed for new cars, so in the event the system fails to recognize the target car and brake, the test car doesn’t smash into a hard target and get damaged. This is obviously especially important for testing with live drivers aboard the test car.

Related: Infineon Driver Assistance's Big Ears Are All the Better to Hear You With

AB Dynamics describes the Soft Car 360 as “an oversized go-kart with electric drive and GPS.” Actually, it is the company’s GST 120 robotic platform covered with foam pieces held together with hook-and-loop fasteners and wrapped in a vinyl skin. The remotely piloted platform lets the Soft Car 360 move like a real car at speeds as high as 75 mph while providing a realistic-looking target vehicle for testing sensor systems on cars under development.

The Soft Car 360 has radar-reflective material in its bumpers, doors, and hood, while the “lights” and number places are made of reflective material. This gives the foam target car the appearance of a real car to camera, radar, lidar, infrared, and laser sensors.

“The vehicle is built of crushable pillows,” observed Daimler test engineer Hans-Peter Schoner. “It has a huge collapsible zone. It is possible to crush the surface. It can drive scenarios when we aren’t confident our development vehicles will avoid collisions.”

It works well enough that Soft Car 360 has been the test target for Euro NCAP safety testing since 2018. It is just the thing for when everything does not seem to be under control, to paraphrase Andretti. 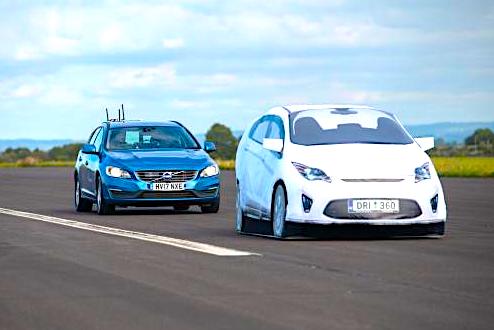