HomeIndustryAerospaceElon Musk Has 4 Keys to Colonizing Mars
Recent
Industry
Argo AI Expands to Austin and Miami in Search of More Challenges
May 18, 2022
12 Ideas that Could Change the World
May 18, 2022
Making the AC Power Main Intelligent
May 18, 2022
How to Make Sure Your Digital Transformation Doesn’t Fail
May 18, 2022
POLL
The Internet's Grooviest Slideshow of Legendary International Scouts
May 17, 2022
Electronics Industry Bolsters Root of Trust Security Efforts
May 17, 2022
3 Tips for Embedded Software Configuration Management
May 17, 2022
Novel 3D Printing Method Used to Replenish Coral Reefs
May 16, 2022

SpaceX CEO Elon Musk has unveiled the company's plans for a Interplanetary Transport System that would make it possible to create a self-sustaining city on Mars.

While NASA is hard at work on its own ambitions for Mars and is projecting to have the first humans set foot on the Red Planet sometime in the 2030s, SpaceX CEO Elon Musk has identified the key challenges that he believes, once overcome, will allow humanity to create a self-sustaining city on Mars. 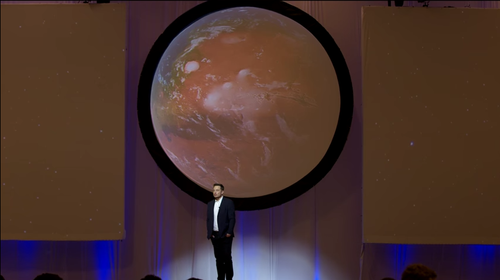 Speaking at the International Astronautical Congress (IAC) in Guadalajara, Mexico, on Sept. 27, Musk, who is also the CEO of Tesla Motors, outlined SpaceX's vision for creating, not an outpost, but an actual functioning civilization on Mars.

Musk told the IAC audience that cost is the (unsurprising) biggest hurdle to putting us on Mars. Using traditional methods he estimated the cost of traveling to Mars today is about $10 billion per person. He reasoned that if the per-person cost of going to Mars could be lowered to something equivalent of the median house price in the US (about $200,000 he said) then the probability of establishing a civilization on Mars would be very high, particularly once you factor in that an early Mars colony would have a high demand for labor.

In essence, SpaceX wants to do for Earth-Mars travel what the Union Pacific Railroad did for North America. But how can such a high orders of magnitude decrease in price be achieved? Musk outlined four key factors:

The system that gets us to Mars will have to be fully reusable, Musk said. Looking to commercial flight today as an example, Musk pointed to the $9 million commercial Boeing aircraft. "[It] would cost half a million dollars for single use. But you can buy a ticket on Southwest [airlines] from LA to Vegas for $43, including taxes," Musk said. "This doesn't apply as much to Mars because the number of times they could reuse the spaceship part of the system would be less because the Earth-Mars rendezvous only occurs every 26 months."

But Musk added that while you only get to use the spaceship part of the system roughly every two years, you get to use the booster and the tank as frequently as you'd like. SpaceX's novel solution to this comes in the form of its Interplanetary Transport System (ITS). In a simulation video, based on the company's actual CAD models, and not artist conceptions, the ITS demonstrates itself as essentially a system of spaceships capable of parking in orbit until they can be refueled to make the trek to Mars.

The SpaceX rocket would have 42 separate engines that ignite with 28.7 million pounds of thrust, almost four times the power of the Saturn V rocket used for the Apollo missions. After exiting Earth's atmosphere the ITS would achieve a stage separation wherein the carbon fiber spaceship goes into parking orbit while the booster returns to Earth. Musk estimated it would take about 20 minutes for the booster to return.

Rather than a splashdown landing, the booster then lands back at the launch mount, where a propellant tanker is loaded onto it as well as any needed cargo. The booster then relaunches back up to the spaceship in orbit to refill it and transfer cargo, before the tanker returns to Earth. Musk said this process would repeat itself about three to five times before the spaceship finally takes off for Mars. "It makes sense to load the spaceships into orbit because you've got two years to do so, then make frequent use of the booster and the tanker," Musk told the audience.