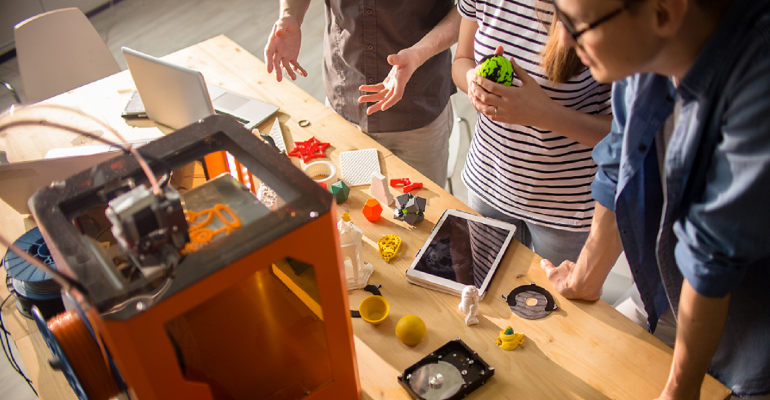 A new 3D printer from MIT researchers can be used to reproduce fine art or fabricate more realistic prosthetics.

Until now, 3D printing has not been a very glamorous endeavor. The additive manufacturing fabrication method is known for printing plastic or metal industrial parts and not as often used to produce objets d’art or other more creative products.

That could change with a new 3D printing hardware and software printing system designed by researchers at MIT that can produce objects with realistic and spatially various gloss patterns in both high gloss and matte finish--a first for this type of fabrication process, researchers said.

A team led by Michael Foshey, a mechanical engineer in the MIT Computer Science and Artificial Intelligence Laboratory (CSAIL), designed the system, which uses off-the-shelf varnishes to leave a glossy sheen on printed objects. He called the accomplishment “a chapter in the book of how to do high-fidelity appearance reproduction using a 3D printer.”

The new system paves the way for the fabrication of reproductions of fine art, more realistic prosthetics, and other types of objects that can mimic original products so “you could almost not tell the difference between the object and the reproduction,” said Foshey, who collaborated with Michal Piovarči of the University of Lugano in Switzerland and others on the project. 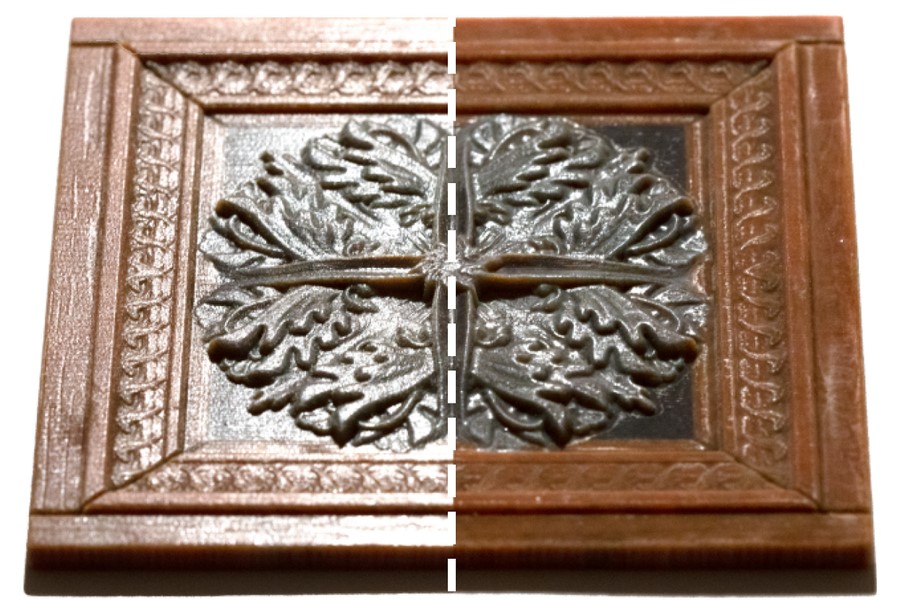 In this image, the left side shows traditional 3D printing, which doesn’t have varying reflectivity. The right side shows the new improvements created by a system developed by researchers at MIT, in which one can choose which surfaces are glossy and which are matte.

3D printers designed for polymers so far have not been designed to print objects with varying types of gloss, which in and of itself is a measure of how much light is reflected from a surface. High gloss is reflective, while low gloss, otherwise known as matte, is unreflective.

Varnishes that provide gloss tend to be less viscous and can dry into a smooth surface, while varnishes to provide a matte finish are more viscous, with a consistency more on par with honey than water. These latter types of varnishes contain large polymers that, when dried, protrude randomly from the surface and absorb light.

“You have a bunch of these particles popping out of the surface, which gives you that roughness,” Foshey explained in a press statement.

Commercial and industrial 3D printers used today have slender fluid channels and nozzles that clog easily if they need to extrude more viscous materials, something printing objects with both high gloss and matte finishes would require, he noted.

Reproducing a surface with spatially varying gloss is currently a labor-intensive endeavor. The object needs to be printed with high gloss as well as support structures that cover the spots where designers want a matte finish. The support material is then removed to give the final surface a roughness, Foshey said.

Therefore, until now, “there’s no way of instructing the printer to produce a matte finish in one area, or a glossy finish in another,” he said in a press statement.

To create a way to do that, Foshey and his team developed a printer with large nozzles and the ability to deposit varnish droplets of varying sizes. The printer’s pressurized reservoir stores the varnish, which are released in droplets onto the printing surface by the opening and closing of a needle valve.

The printer can produce a variety of droplet sizes by controlling factors like the reservoir pressure and the speed of the needle valve’s movements, Foshey said. The more varnish released, the larger the droplet deposited, a relationship that also applies to how fast the printer releases a droplet, he said.

“The faster it goes, the more it spreads out once it impacts the surface,” Foshey said in a press statement. “So we essentially vary all these parameters to get the droplet size we want.”

To fabricate an object with spatially varying gloss, the printer works with three off-the-shelf varnishes—glossy, matte, and one in between—and uses a technique called halftoning that arranges discrete varnish droplets in patterns which, when viewed from a distance, appear like a continuous surface. “Our eyes actually do the mixing itself,” Foshey explained in a press statement.

The outcome of the process is a continuous yield of spatially varying shades of glossiness across a printing surface, he said. A paper on the work is available online and will be presented at next month’s SIGGRAPH Asia conference. The MIT and University of Lugano teams also collaborated with researchers at the Max Planck Institute and Princeton University.

Along with the hardware, Foshey’s team also invented a software pipeline to control the printer’s output so a user can indicate their desired gloss pattern on the surface before printing. The printer then runs a calibration and tests various halftoning patterns of the three supplied varnishes, basing the halftoning pattern for the final print job on this measurement.

The team printed a variety of objects—mainly flat printouts with textures that varied by half a centimeter in height—to prove the technology. Researchers plan to continue developing the hardware for use on fully 3D objects, they said, with the ultimate goal of integrating it into commercial 3D printers.