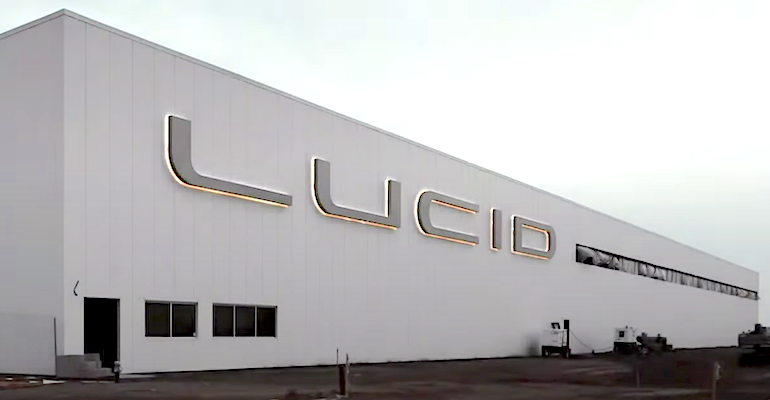 Our Q&A with Lucid vice president of manufacturing Peter Hochholdinger finds him undaunted by the task.

Lucid Motors is making some impressive claims for the expected performance of its electric luxury sedan, the Air, which will commence production next spring. But rather than bluster, Lucid has been methodical and quietly confident in its measured progress toward the goal of designing and building what it declares is the world’s most advanced EV.

They will do this using a new factory, speedily built in Casa Grande, Arizona, a place with no history of building cars. Yet Lucid vice president of manufacturing, Peter Hochholdinger, seems unconcerned about the potential for problems.

Design News thought it would be good to investigate the reasons for Hochholdinger’s confidence. 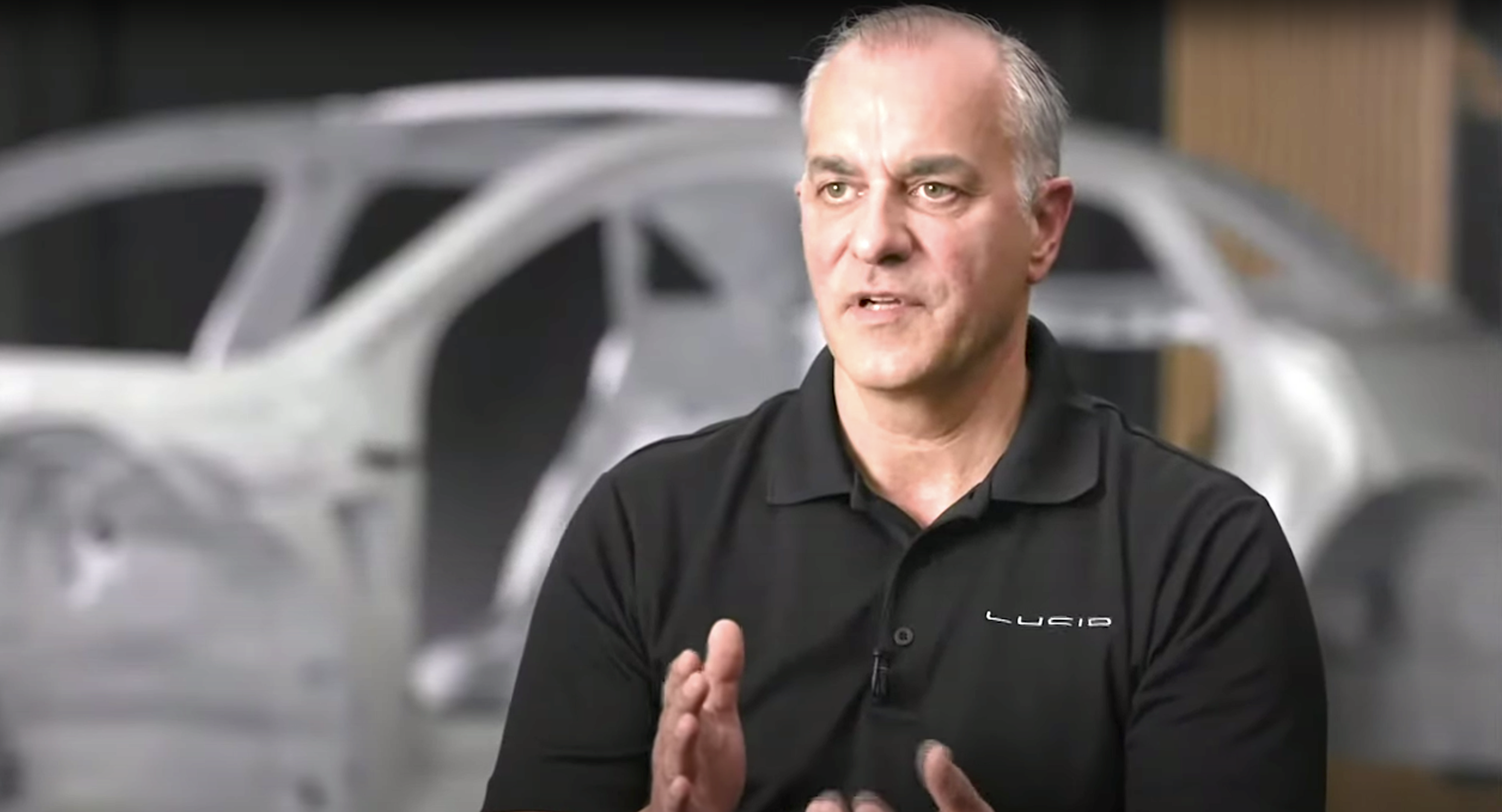 Design News: For many years, Toyota followed a policy of only building existing models in new factories and only building new models in existing factories because they believed that it ensured the company could maintain quality standards. What is it like to launch a new car in a new factory?

So, first, we have our Lucid manufacturing leadership team. They are super-experienced, and they’ve made several product launches in their career already in both automotive environments and in EV startups.

Secondly, we have a built-in team that we trained over the last year here in California building our engineering cars here. They learned everything from the ground up, making their own workbooks and everything like that.

The third thing is that we don’t work in silos. We work in cross-functional teams. So, a manufacturing team is working together with Eric Bach’s engineering team and Peter Hasenkamp’s supply chain team, working together with the [automatic driver assistance system] team, and the software team, so we’re working closely together to make that happen.

If you want to build a luxury vehicle, without quality, there is no way. You need quality. In your processes, in your design, in your product, everything you do.

So, we’re starting the factory with the quality-driven route. We will not hit numbers because we want to hit numbers. That doesn’t make sense in the luxury segment. We will hit quality achievements and quality goals and move forward. Once we hit them, then we can create higher numbers. That is the path, how we want to move forward and make a community of Lucid fans who are super-convinced of our products, of our story, of our culture, of what we believe is important for our planet, and for our community. 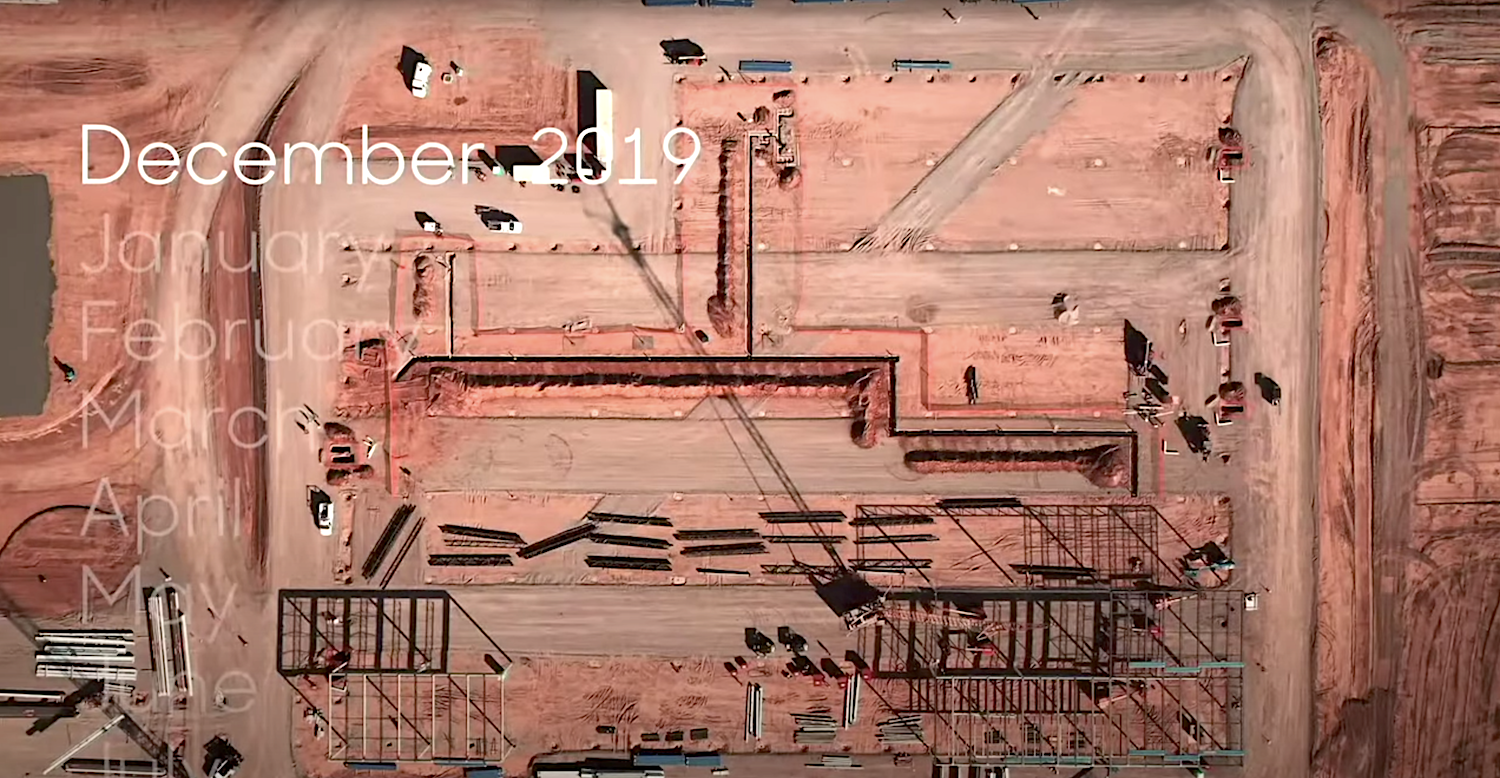 We made a very extensive search in over 13 states and 60 locations. We looked at factors in regard to geographic location, infrastructure, nearby supply bases, and also looked at talent. We decided to build the world’s most advanced vehicle in the first EV greenfield factory in the U.S. in Casa Grande in Arizona. And that’s a great place to be.

I can tell you when we talk about the talent we found there, it is our people who are eager to learn, who are willing to step up. They want to build a quality car.  Arizona, Pinal County, the city of Casa Grande, they support us so much and you can see that in the results.

Design News: It seems like you just broke ground, and now the factory is finished. Did you set a world speed record for factory construction?

Peter Hochholdinger: We built the world’s fastest factory in less than nine months. You bet that’s a world record, you bet! 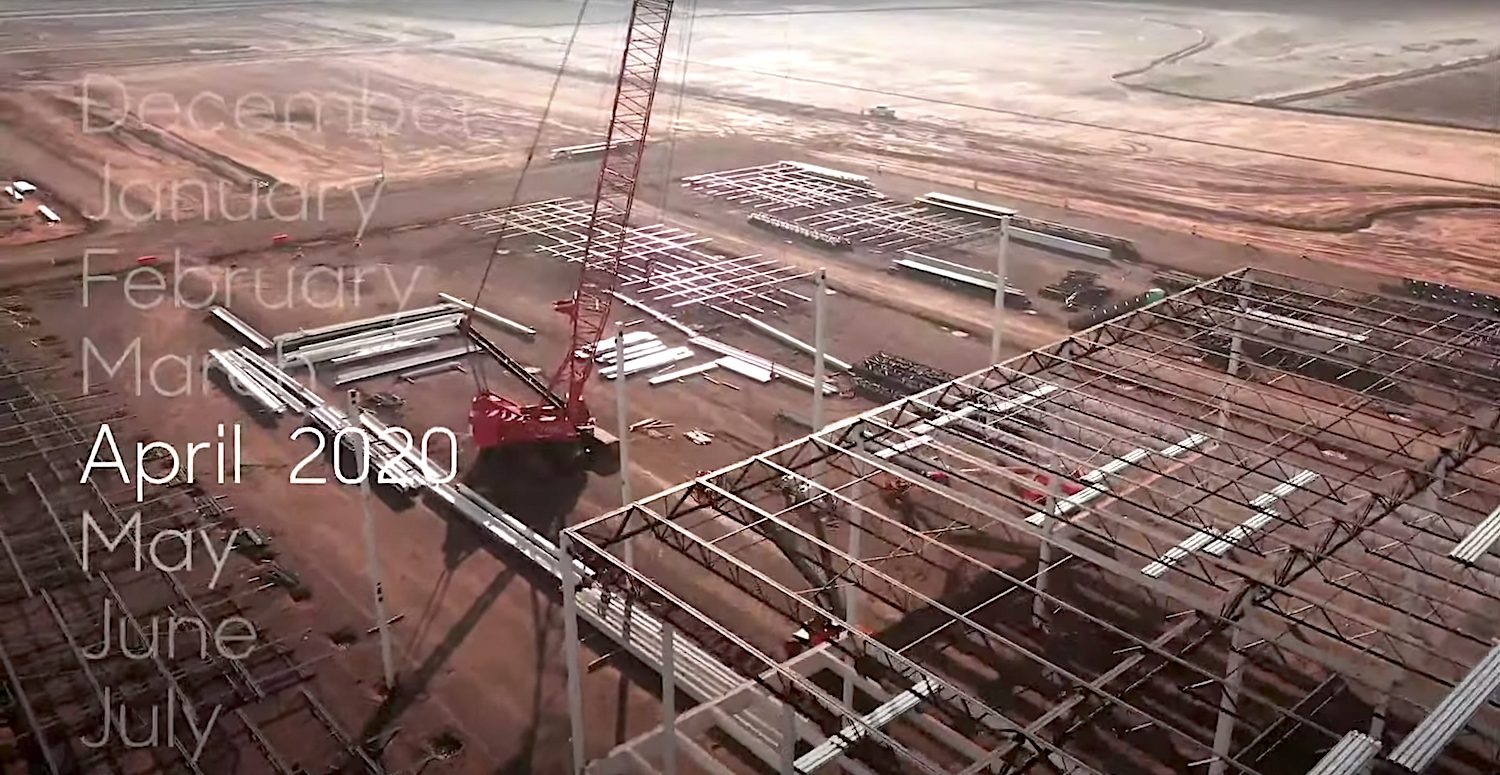 Design News: What are the advantages of a greenfield factory location rather than retrofitting an existing factory?

Peter Hochholdinger:  Our factory is the first greenfield EV factory in North America and I’m very proud to be part of that.  Building a greenfield factory from a clean slate is really a good thing to do because you have your processes and you can design and build your factory around these processes. It is super-efficient work you are doing in there.

Once you start to build a greenfield factory, it is the best approach ever. Otherwise, you create waste. The factory will not be perfect like it should be, to be efficient, cost-effective, and quality-driven.

Also, we can scale our factory up. So, we build it first a little smaller, and then we go up, ten-fold. That’s the most efficient way you can do it. You can never do that with an existing plant. You always have a plant from the 20th century and you have to follow the processes of that century.

This factory is super unique because it is wrapped around a ten-year plan. What you see now is just plan phase number one. The paint shop is the cornerstone of this factory and we built the factory around this.

So, this factory can scale ten-fold, which as far as I know never has been done before. It can go up to 60 jobs per hour within ten years. I’m proud of my team. They are experts on their topics, and I have to keep up with them. It is hard. It is hard work because they are brilliant! They believe in what we are doing together and what we want to achieve and where we want to go. 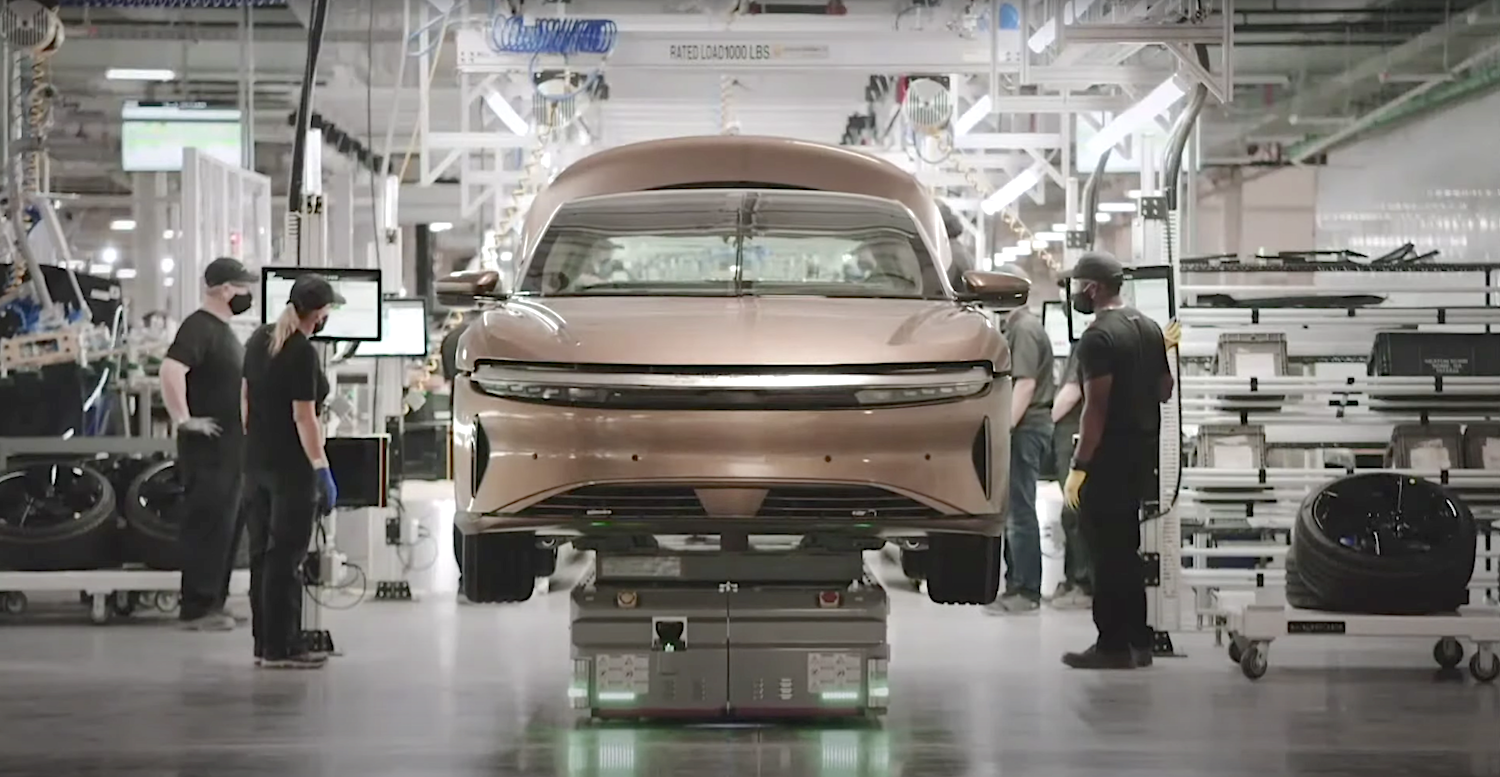 Design News: What is the factory doing now and what will be happening between now and the start of production?

Peter Hochholdinger: Now, at the moment, the first engineering cars are rolling out of general assembly. These are cars that we will hand over to Eric Bach’s [engineering] team that get final testing. Then we will step into our so-called ‘C release’ candidates. These are cars for manufacturing that we can dial in our equipment to a fraction of a millimeter so we can produce quality next spring when we will have the start of production and hand over the first cars to our customers. I’m super excited. 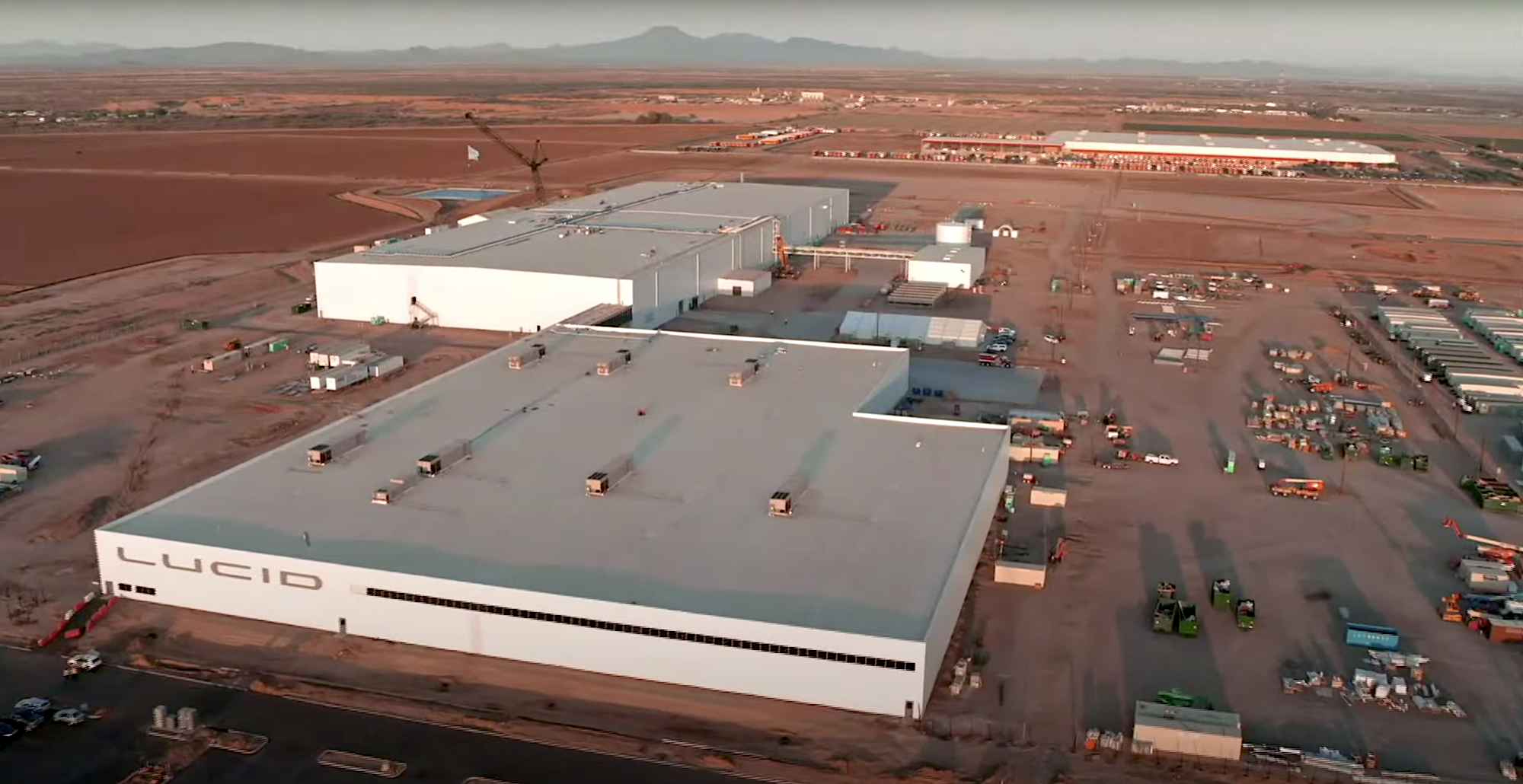 There is ample space around the completed Lucid plant for planned expansion.