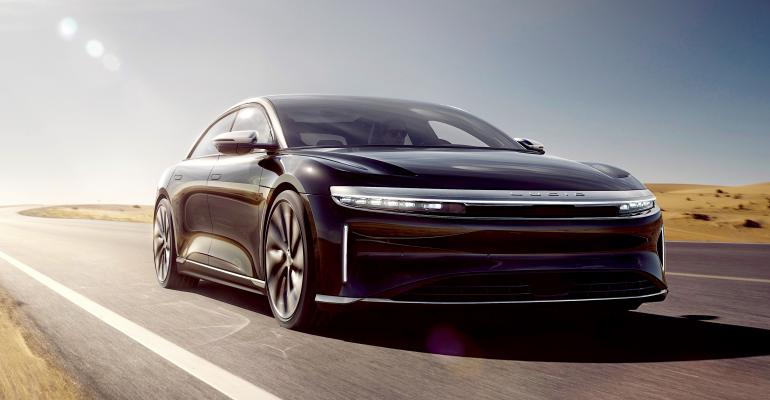 There’s a Silicon Valley electric car maker promising to deliver breakthroughs in technology and design that will provide new levels of EV driving range and performance, but it is not the company with the notoriously outspoken CEO. Instead, Lucid Motors is quietly achieving milestones and refining developments as it progresses toward planned mass production of the Lucid Air luxury sedan next year.

That timetable has slipped a bit as a result of COVID-19-related delays, noted CEO and Chief Technical Officer Peter Rawlinson, but any delay has only given the company’s engineers a little breathing room to double check their work, he said.

Applying the just-in-time model of manufacturing, where supplies arrive at the factory just as they are needed to build that day’s cars, so Lucid has scheduled its ramp toward manufacturing so that its new Casa Grande, Ariz. factory will be ready for production at the same time that the company has signed off on its final prototypes and set the production specifications.

Building the factory any sooner would have been a waste of capital, with no cars to build yet, Rawlinson pointed out. The factory should be busy once customers get familiar with the cars, which combine standard-setting capabilities with sleek contemporary styling. The first year’s production target is 12,000 cars, with a stringent focus on build quality over production volume, Rawlinson explained.

Lucid says that the Air, which is a 1,000-horsepower, four-passenger luxury sedan, will have be capable of a 400-mile driving range and sub-2.5-second 0-60 mph acceleration times in the version with the biggest battery and most electric drive motors.

As we’ve seen with Tesla and Porsche, the Air will be available in various configurations with two-wheel and all-wheel drive and different-sized battery packs, depending on the customer’s budget. Lucid aims to differentiate itself by delivering more than its rivals, which it will do through optimization, Rawlinson said.

“We often read in the press this is called battery efficiency,” he said. “I really challenge that. It is the efficiency of everything else but the battery.”

That starts with aerodynamic drag. Less drag delivers improved efficiency and improved performance. “We recorded the lowest drag figure ever recorded [for a production car] at a rolling road wind tunnel,” Rawlinson reported. It isn’t just the coefficient of drag that matters, but also the total drag, which is related to the frontal area. “We’ve got smaller frontal area. In plan view, our car is smaller than [Porsche] Taycan and [Tesla] Model S.

The company has also put thought into airflow details to trim drag. EVs don’t have traditional grille air intake feeding the combustion engine’s heat exchanger with cooling air, but they do need some air to cool the radiators for the inverter. Lucid proudly points out that its car achieved its low drag score with those air intake ducts open, not closed, as is sometimes done in pursuit of a good score.

The car fared well even with those ducts drawing air because the system was designed to create a vortex, like a Dyson vacuum cleaner, so it doesn’t need as much air to deliver the cooling effect, according to Rawlinson. “We are looking at real-world gains here, not some artificial CD numbers,” he insisted.

Rawlinson also points to improvements in powertrain efficiency, with an optimized power inverter and electric motors reducing wasted energy. “We have an elegant in-house inverter with silicon carbide technology.” he said. “Its connections are super short,” minimizing losses, he added.

Rawlinson is a booster of silicon carbide technology and he expressed surprise that Porsche has not employed it for the Taycan. An explanation from McLaren Applied Technologies illustrates the benefits of silicon carbide in the powertrain for Formula E race cars (for which Lucid division Atieva is the battery pack supplier):

Silicon carbide is a highly durable crystalline compound of silicon and carbon, resistant to high temperatures and offering high electrical conductivity. This enables a step change from traditional semiconductor technology, which loses more energy as heat during the power-conversion process.

Silicon carbide inverters offer considerable efficiency gains versus conventional inverters based around silicon semiconductors because they produce less heat and are less temperature-sensitive, and therefore have lower cooling demands. They also occupy a smaller form factor, making them ideal for use in electric vehicles.”

This touches on the electric motor advances Rawlinson said give Lucid’s Air an advantage over its rivals. “We’ve got a super-efficient motor with real breakthroughs,” he said. “They are super compact and efficient.” It is a permanent magnet design, chosen for its reduced internal resistance to free spinning, he said.

Further, the motors were designed in conjunction with the Air’s transmission ensuring each is optimized to work with the other. “It is a single rotational inertia system. The motor and transmission team truly design a motor-gearbox unit. You can get losses where you connect the two with the tolerances,” and Lucid has avoided those losses, Rawlinson said.

This doesn’t mean that there aren’t opportunities for efficiency gains in the battery pack too, he added. Lucid runs a 900-volt battery pack, which is higher even that that of the 800-volt pack in the Porsche Taycan and far higher than Tesla’s 400-volt system. Industry observers expect EV pack voltage to eventually reach 1,000 volts.

The reason is to improve efficiency. “For a given power, by doubling the voltage, the actual current is halved.” Reducing current reduces resulting losses by the square of that reduction, according to the so-called copper loss equation of I2R, where I is current and R is the resistance. Loss at 900 volts is therefore just 20 percent that of 400 volts.

As the battery pack supplier for the Formula E racing series through its Atieva division, Lucid has learned important lessons in efficiency. That’s because at the equivalent of full throttle, “you can lose 150 horsepower just heating the pack” from resistance, Rawlinson noted. “It is only because of the thermal capacity of the pack that it can take it.”The design of the Formula E pack is obviously different from that of the Air, as the Air’s battery is designed to favor the energy needed for long driving range, while the Formula E battery is a hybrid design that skews more toward battery power while preserving energy capacity that lets the cars complete a race on a charge.

Rawlinson insists there are advantages to cylindrical batteries that make them preferable, even if they aren’t as fashionable. “I hope they stay with prismatic,” he said. “I’m a big fan of cylindrical.” Alas, we’ll have to wait to learn exactly what he thinks the advantages are of using cylindrical cells. “I’m not prepared to say why,” he demurred.

The result of sweating so many details to extract maximum efficiency from every system on the car can be demonstrated by its energy per mile. “How many watt-hours, per mile you use,” is a good metric, suggested Rawlinson. “To broaden the appeal of EVs, we have to make it digestible by the general public. A bit like gas mileage.”

And the Air’s score? “Getting close to 4 miles per kilowatt-hour is what I would call ‘highly efficient,’” he said. Hearing solid numbers from a Silicon Valley EV CEO certainly sounds better than the bombast we often hear from a more famous colleague.

We will surely learn more as production-specification pre-production prototype cars begin to roll off the new Arizona assembly line near the end of the year.