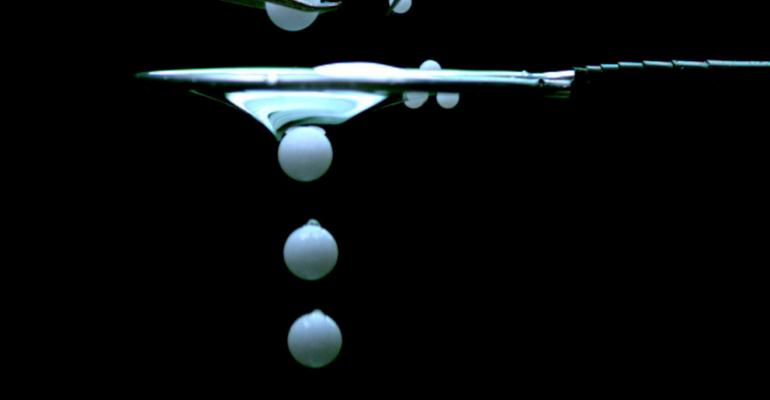 A self-healing filter developed by researchers at Pennsylvania State University lets large objects pass through while small ones remain, paving the way for novel applications.

Researchers have developed a new type of filter that acts in the complete opposite way compared to how we typically use filters: It lets large objects pass through while keeping smaller ones contained. The invention, which hails from mechanical engineers from Pennsylvania State University, could be used for a number of novel applications in which a large surface area must be protected from small particles or objects, researchers said.

While this type of filtration may seem counter-intuitive, it’s actually common in microscopic cellular organisms, which “use a similar strategy to ingest external objects without leaking their cellular content to the outside environment,” explained Birgitt Boschitsch, a graduate student in mechanical engineering who worked on the research. “This is made possible by their liquid-like, self-healing cell membranes,” she said.

Researchers applied the same principle to their work, using a stabilized liquid material that screens out smaller objects while allowing larger ones to pass through. It does this not by separating objects by size, but by responding to an object’s kinetic movement or energy.

In its simplest form, the membrane can be created with water and a substance that stabilizes the interface between liquid and air, giving it a structure similar to that of a biological cell membrane. Researchers used a simple soap film as the liquid in their prototype, they said.

Once the membrane is established, the materials can be modified and optimized so the filter can serve unique purposes, such as enhanced mechanical robustness, antibacterial properties, or odor-neutralization. "You could add components that make the membrane last longer or components that allow it to block certain gases," Boschitsch explained. "There are endless potential additives to choose from to tailor a membrane to the application of interest."

One real-world use for the invention is as a surgical film that allows surgeons to operate on an open wound without other contaminants getting into the wound, Wong said. It also could be used as an odor barrier for waterless toilets that allow solid waste to pass while blocking the odor-causing gases. Wong added that the filter could be used to protect livestock from disease-carrying insects, keeping them away from the animals.

Researchers published a paper on their work in the journal Science Advances. The researchers have filed an international patent application for their work and plan to continue to develop the filters further to make them as intelligent as possible, “similar to those of biological cell membranes which can sense, and selectively filter, different types of particles,” Boschitsch stated. “We are also interested to tailor the compositions of the reverse filters for specific applications,” she said.