Spider Glue Provides Insights into How to Improve Adhesives 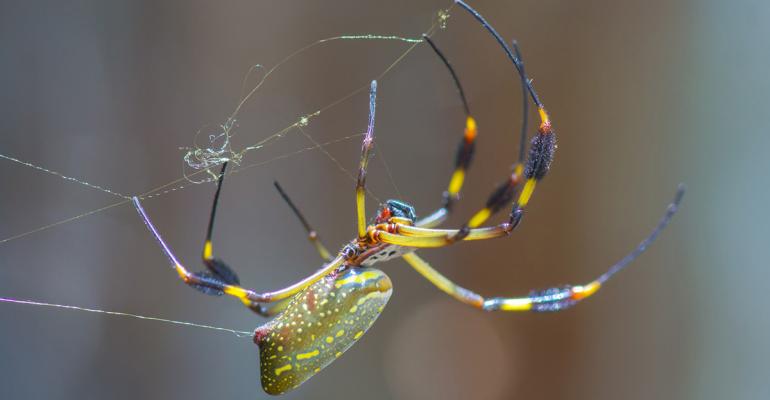 Researchers at the University of Akron observed how orb spiders make their capture glue so sticky, even when exposed to water.

Dealing with the effect of humidity or water has been one of the great challenges for those designing adhesive materials. Now, researchers at the University of Akron have used what may seem like an unlikely inspiration—orb spiders—to improve the stickiness of adhesives—even when exposed to what’s called interfacial water.

When water comes in contact with an adhesive material, it forms a slippery and non-adhesive layer between the glue and the surface to which it is meant to stick. This makes it less likely to stay in place and more prone to slip off.

To overcome this phenomenon, researchers, including graduate student Saranshu Singla—who worked with professors Ali Dhinojwala in the university’s College of Polymer Science and Polymer Engineering and Todd Blackledge in the Integrated Bioscience program—studied spiders. In particular, they studied orb spiders, which create one of the strongest materials found in nature, spider silk.

This silk is coated with a sticky glue that’s actually a hydrogel and thus full of water. However, what’s interesting is that it maintains its adhesive qualities even in humid conditions, Singla told Design News. “We were intrigued by how effortlessly spiders catch prey in their webs using the sticky capture glue in both dry and humid environments as opposed to most conventional synthetic adhesives that fail at high humidity,” she said.

Common examples of interfacial water’s effect on adhesives include paint peeling off the wall in climates with high humidity and a Band-Aid separating from wet skin, Singla said. “In contrast, spider capture glue is able to perform in both dry and humid environments,” she noted. “Thus, understanding the reasons behind the success of the capture will initiate the design of better synthetic adhesives.”

The spider capture glue is a complex mixture of glycoproteins—a protein with pendant sugar groups—along with a cocktail of hygroscopic, or water-attracting, compounds and water, Singla explained.

“These hygroscopic compounds make the spider glue soft and tacky by absorbing atmospheric water,” she said. “Therefore, we designed a study to understand how spider glue maintains its stickiness at high humidity even though the capture glue itself is full of water, like a hydrogel.”

To study the orb spider’s capture glue, the team set it on sapphire substrate and then examined it using a combination of interface-sensitive spectroscopy and infrared spectroscopy.  From their investigation, they discovered that the liquid-like water in the material is completely excluded from the contact boundary by the hygroscopic compounds found in it, Singla said.

“This unravels a previously unknown and surprising role of hygroscopic compounds in preventing adhesive failure by pulling water away from the contact boundary,” she said.

The knowledge researchers learned from their observations now can be applied to commonly used adhesives, such as paints, medical bandages, and tissue adhesives, Singla said. Developers of these materials can incorporate hygroscopic compounds in them and/or coatings to their surfaces to prevent adhesive failure in the presence of water.

The University of Akron team plans to continue its work to use the same methodology to investigate the glue from a different type of spider, she noted. They plan to test whether different spider species use a common approach for preventing failure at high humidity, or if there are other approaches.

“Also, we would like to incorporate the findings from our current study to create a unique coating, which will be able to prevent penetration of water to the coating and/or substrate interface to prevent adhesive failure,” Singla added.

The research team published a paper about their work in the journal Nature Communications.