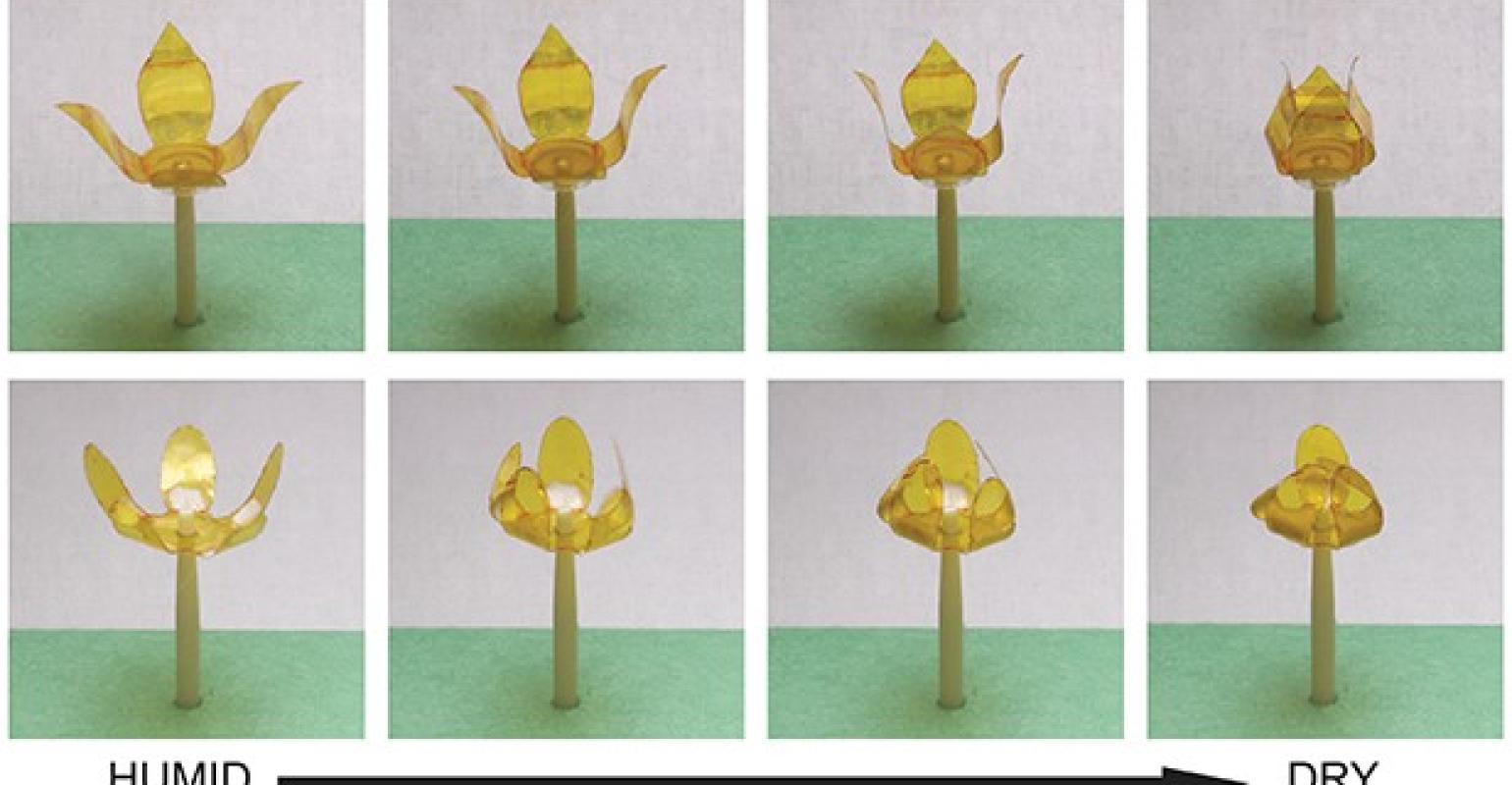 A new spore-based composite material moves in response to water and humidity for new robotic and other novel applications.

Researchers have developed a robot using new bacteria-based actuation which is controlled by water or humidity—paving the way for numerous new, autonomously powered applications.

A team at Columbia University led by Ozgur Sahin, associate professor of biological sciences and physics, developed a material made of a combination of spores and adhesives that can be used as an alternative to synthetic polymers for robotic actuators. Spores are units produced by bacteria and are commonly used as food supplements.

The actuators made with this material are quicker to respond than those made with more traditional polymers, as well as can generate a higher level of force, researchers said. Moreover, they are water-resistant and actually use water and humidity to help determine their movement, whereas traditional polymer actuators usually fail when they come in contact with water, Sahin said.

“There’s a growing trend of making anything we interact with and touch from materials that are dynamic and responsive to the environment,” he said. “We found a way to develop a material that is water-resistant yet, at the same time, equipped to harness water to deliver the force and motion needed to actuate mechanical systems.”

To develop the material, researchers bound together the tiny spores—which are individually water-resistant—using a photochemical process, they said. That process uses a high-intensity light—via an ultraviolet light akin to the one used in nail salons to dry polish—to glue the spores together into a composite material. Onur Cakmak, a member of the research team, compared the process to making sheets of surfaces from sand because the materials are so granular.

Once hardened, researchers stacked the material in layers to form a microscopic structure that expands or contracts with humidity or moisture. This produces the capability for force and motion of mechanical movements, researchers said.

The material also can be patterned, which allows researchers to create pattern designs that can guide the composite to bend, fold, and unfold in response to humidity or water, Cakmak said. In this way, the soft actuators can adapt to surroundings and move with more agility than traditional hard robots, allowing them to move more similarly to natural creatures, he said.

Indeed, this ability to be patterned is essential to researchers who want to create “useful systems” from the materials, Cakmak added.

Because the new material is so different than the hard polymers that typically comprise robots—which use metallic structures that require a computer to control actuation—soft robots designed with it don’t need a rigid skeleton or electricity to provide mechanical strength, researchers said. This makes them easier and less expensive to fabricate, as well as capable of more complex motions and safer to use around humans, Sahin said.  Researchers published a paper about their work in the journal Advanced Materials Technologies.

The team sees a number of potential applications for the new material, including applications for smart-energy buildings that include windows that can open when the humidity rises too high, Sahin said. It also could be used to make high-performance fabric for athletic clothing that can help sweat evaporate faster.

“We’re providing material for designers to work with and get their ideas realized quickly,” Sahin said. Researchers plan to continue to work on and test the material to explore the variety of novel uses as well as its inclusion in existing applications, he added.