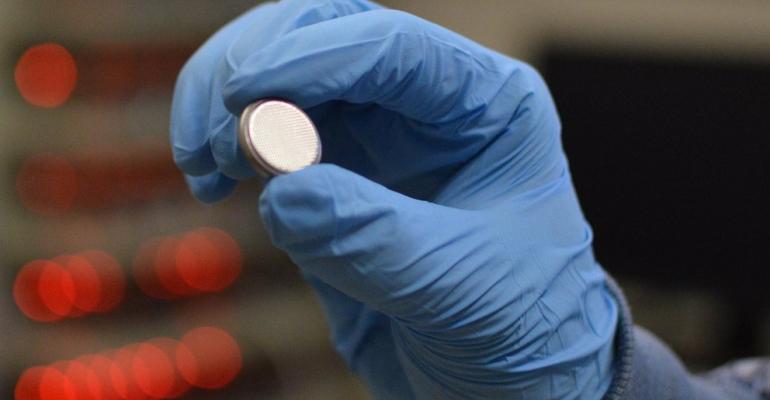 Researchers have discovered a sodium-based material that could be used as a safer, more environmentally friendly electrolyte for batteries.

The current standard battery design for consumer devices and electric vehicles is a liquid, lithium-based ion for the electrolyte—the part of the battery responsible for transferring charged ions in a solid-state battery. But liquid electrolytes have safety issues due to concerns over flammability, which already have caused serious incidents for devices and EVs with lithium-ion batteries.

"That has been the driving force for us to find a good material for use in solid-state batteries," said Donghai Wang, associate professor of mechanical engineering at Penn State. Researchers think they’ve found it in a new material of a tetragonal crystal shape composed of sodium, phosphorous, tin, and sulfur. Defects—or spaces in the material where certain sodium, tin, and sulfur atoms would be—allow for it to transfer ions, Wang said.

The team, which includes Wang, is a collaboration between Penn State University and Pacific Northwest National Laboratory (PNNL). They are using a design approach that they hope will help to expedite the time it takes to move from the lab to commercial use with their invention. The team has published a paper about its work in the journal Nano Energy.

Sodium has benefits for use over lithium in battery chemistries, which has increased interest in the material and led to a number of new designs that use the material in place of lithium. It’s a much more abundant material than the latter, making a battery that uses it much less expensive to produce. The safety issue also is a benefit.

A Possible New Class of Battery

Specifically, researchers said their use of sodium has a wide voltage window and high thermal stability. Those aspects make it conducive to a safe battery design, performing well up to 752 degrees Fahrenheit versus the potential for flammability that liquid electrolytes have at 302 degrees, said Zhaoxin Yu, postdoctoral researcher in mechanical and nuclear engineering, Penn State.

Moreover, the material has room-temperature ionic conductivity about one-tenth that of the liquid electrolytes used in today's batteries, paving the way for the development of a new class of advanced sodium-ion super-ionic conductors, researchers said. The reason for this is the specific configuration of defects within the crystal structure.

Identifying that configuration was made possible by the collaborative design approach the team employed, which uses both computation and experiments to analyze why the materials are performing differently. This approach should help them reduce the time it takes to get their work out of the lab and into the mainstream commercial market, said Zi-Kui Lui, a distinguished professor of materials science and engineering at Penn State.

"If you don't have this set of tools, it would be difficult to make a breakthrough," Zi-Kui Lui noted. "Our approach that uses both computation and experiments allows us to analyze the reason why materials perform differently. That will make things faster for the next round of design because we know what we need to control in order to enhance ion transportation."

Elizabeth Montalbano is a freelance writer who has written about technology and culture for 20 years. She has lived and worked as a professional journalist in Phoenix, San Francisco, and New York City. In her free time she enjoys surfing, traveling, music, yoga, and cooking. She currently resides in a village on the southwest coast of Portugal.