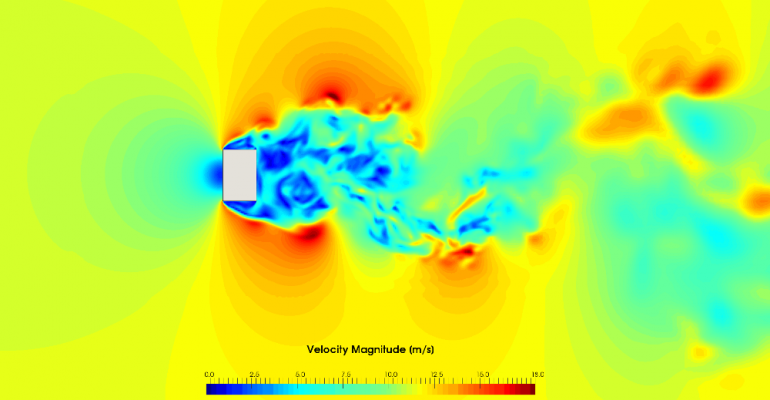 A new Lattice Boltzman Method cloud-based solver provides aerodynamicists and engineers with a powerful new tool to simulate flow over vehicles and buildings.

Much of modern engineering relies upon simulations of physical phenomenon. This is especially true in aerodynamics and fluid flow, where full-size vehicles or building structures are too large to easily test in a prototype stage. Yet experiments run in wind tunnels at smaller scale have difficulty accurately representing the characteristics of the flow fields. As a result, computational fluid dynamics (CFD) programs have been developed to aid engineers in their quest for products with improved aerodynamic capability.

In essence, there are two goals in CFD as applied to external flow. The first is to calculate forces and moments that result from the flow of a fluid (air and/or water) over a vehicle (car, truck, racecar, aircraft) or an architectural design (building, bridge)—usually to determine drag and lift forces in an attempt to predict the stability of the vehicle or structure. The second goal is to visualize the flow patterns that occur as air passes over an object to help the designer improve the flow—for example, by reducing drag or enhancing desirable lift characteristics of a vehicle or by improving pedestrian comfort when walking between buildings.

By far, the most common CFD approach is to solve a series of nonlinear, partial differential equations—the Navier Stokes Equations—via a constant volume method to obtain the pressure and velocity of millions of macroscopic elements or cells that represent volumes of air. The results can be examined either as a steady state flow or with a transient simulation. Approximating a solution to the Navier Stokes equations takes hundreds or thousands of iterations. And even with high-power computing resources, it can take many hours for a steady-state solution or many days of computation for a transient result.

The computational side of CFD has evolved during the past decade. Early programs required gigantic supercomputer facilities and massive amounts of energy to run the solvers. Eventually, the programs were made more efficient so that they could run faster on arrays of parallel processors with significantly less cost. The most recent versions of CFD programs can be run on souped-up desktop computers with runtimes of several hours providing reasonable usable results—at least for steady-state simulations. More recently, a company called SimScale has created a cloud-based CFD system that allows users to access an array of parallel processors with a user-friendly interface on a simple desktop computer.

A New Approach to the Lattice Boltzman Method

Because approximating a solution for the nonlinear Navier Stokes equations is so difficult, other CFD approaches have been developed. One is called the Lattice Boltzman Method (LBM). LBM deals with a so called "distribution function," which describes the amount of molecules moving into different discrete spatial directions. The macroscopic fluid properties, such as velocity and pressure, can be then reconstructed from the distribution function.

Working with a company called Numeric Systems GmbH, SimScale has created a cloud-based LBM solver that allows users an alternative to Navier Stokes (NS) constant volume solvers. David Heiny, SimScale’s CEO and co-founder, told Design News that, “As always in engineering simulation, there is no ‘one method for all applications,’ but every method comes with advantages and disadvantages.”  Using LBM provides some advantages over traditional CFD solvers. “Since LBM results in an inherently transient, explicit, and purely linear mathematical formulation for the fluid state evolution, it is less compute intense than the nonlinear terms of NS,” said Heiny. “There are some other numerical advantages in LBM, such as high order advection (2 and above), low numerical viscosity, and good conservation,” he told us.

For the traditional NS CFD user, the new LBM does have some limitations. One of the main challenges for LBM is wall modeling. “As LBM requires regular Cartesian grids, appropriate sub-grid modeling of the geometry surface is not straightforward and challenging if one is interested in accurate results,” noted Heiny. Where NS simulations allow a variety of shapes and sizes to produce a “mesh” of volume elements, LBM requires the mesh to be built only from rectilinear cells. The size of the LBM cells can be varied, however, to achieve acceptable surface representation.

Pacefish, the LBM solver developed by Numeric Systems and integrated in SimScale, comes with its own Cartesian mesh engine. The user only defines flow domain and other physics and the grid is generated at solver runtime. Because it's a purely Cartesian grid, it's significantly faster, less error prone, and more tolerant toward dirty geometry/CAD. In fact, the speed of the LBM solver is impressive. This completely new implementation of the Lattice-Boltzmann method is tailored to the massively parallel architecture of GPUs, allowing it to run efficiently on multiple GPUs in parallel and giving results up to 20 to 30 times quicker than a typical NS transient simulation, according to information provided by SimScale.

“The accurate analysis of transient flows has historically been fraught with very long computing times and high up-front costs in order to yield realistic results. With the release of this new Lattice-Boltzmann solver, CFD engineers no longer need to choose between speed and accuracy—and on top of that, can access it with the convenience of an entirely web-based workflow. We’re very excited to see our customers seize the new opportunities this technology is opening up,” said SimScale’s David Heiny.