HomeMaterialsSelf-Healing Material Inspired by X-Men’s Wolverine
Recent
Materials
Using Low-Code/No-Code Systems for Manufacturing Quality
May 19, 2022
Los Angeles Fire Department Deploys Nation’s First Electric Fire Truck
May 19, 2022
Supplier News Looks at an Automated Coolant Management System
May 19, 2022
Is Magneto the Hero We Need to Destroy Blood Clots?
May 19, 2022
POLL
Using AI To Help the Deaf Communicate
May 19, 2022
Argo AI Expands Driverless Operation to Austin and Miami in Search of More Challenges
May 18, 2022
12 Ideas that Could Change the World
May 18, 2022
Making the AC Power Main Intelligent
May 18, 2022 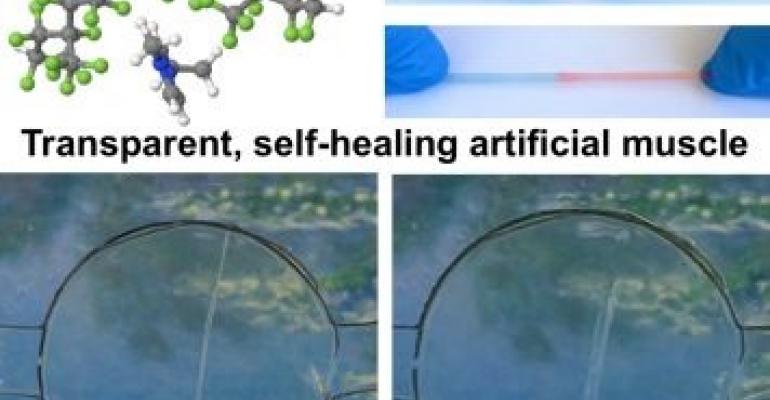 A cross-university group of scientists was inspired by the self-healing capability of the X-Men character Wolverine to develop an electrically charged material with similar characteristics.

A cross-university group of scientists was inspired by the self-healing capability of the X-Men comic and film character Wolverine to develop an electrically charged material with a similar characteristic.

Researchers from both the University of California Riverside and the University of Colorado developed the material, which is highly stretchable and conductive, they said. This makes the material well-suited to power artificial muscles, as well as to improve the development of batteries, electronic devices, and robots by giving them self-healing properties, allowing them to repair small cracks and tears and therefore prolong their lifetime.

The research represents the first time scientists have created an ionic conductor—material that ions can flow through—that’s transparent, mechanically stretchable, and self-healing, Chao Wang, an adjunct assistant professor of chemistry at UC Riverside, told Design News in an interview.

The research team, which published a paper on its work in the journal Advanced Materials, was inspired by the character Wolverine from the X-Men series to develop the material, Wang said. One of the character’s superpowers is the ability to heal himself when harmed.

The team focused its work particularly on using the material to develop an artificial muscle, also called a dielectric elastomer actuator. Artificial muscle is a generic term used for materials or devices that can reversibly contract, expand, or rotate due to an external stimulus such as voltage, current, pressure, or temperature.

“Currently, the combination of ion conductivity, high stretchability and self-healing capability is not available,” Wang said. “It's very important for many applications, such as artificial muscles. That's because the ionic conductor for artificial muscle could be easily broken over the operation process. Our materials can greatly enhance the lifetime and reliability of artificial muscles.”

That’s not the only application for the material, which boasts a diverse range of uses, he said. It could give robots the ability to self-heal after mechanical failure as well as extend the lifetime of lithium-ion batteries used in electronics and electric cars by allowing them to repair themselves, Wang said. Engineers also could use the material to create medical and environmental-monitoring biosensors.

“The inspiration was to make a material that has more functions, is more durable and robust, and will allow for many more advanced applications,” said Timothy Morrissey, a graduate student at the University of Colorado that also worked on the project. “By combining self-healing with transparency, stretchability, and electrical conductivity, we will be able to make devices that are not possible without this material.”

Researchers previously had been able to develop stretchable, transparent, ionic conductors that were used to power artificial muscles, but adding a self-healing property has proved challenging in the past, they said.

The key difficulty has historically been identifying bonds that are stable and reversible under electrochemical conditions. Normally, self-healing polymers make use of non-covalent bonds, which is problematic because those bonds are affected by electrochemical reactions that degrade the performance of the materials, researchers said.

Wang helped to solve this problem by using a mechanism called ion-dipole interactions, which are forces between charged ions and polar molecules that are highly stable under electrochemical conditions, he said.

The team will continue its work to develop the next-generation self-healing ion conductors with better mechanical, electronic, and self-healing properties, Wang said.

Other uses for the material also are being explored, Morrissey said. “We believe this material can be adjusted to have certain properties that are more suited for a variety of different applications,” he said. “One particular application we are very interested in includes sensing or self-healing artificial skin.”

Research also will continue with the original artificial-muscle application “to make even more robust devices that can withstand more intense damage and continue to perform the desired function,” Morrissey added.