HomeMaterialsResearchers Develop New Indoor Solar Cells for Smart IoT Devices
Recent
Materials
Is Magneto the Hero We Need to Destroy Blood Clots?
May 19, 2022
Using AI To Help the Deaf Communicate
May 19, 2022
Argo AI Expands Driverless Operation to Austin and Miami in Search of More Challenges
May 18, 2022
12 Ideas that Could Change the World
May 18, 2022
POLL
Making the AC Power Main Intelligent
May 18, 2022
How to Make Sure Your Digital Transformation Doesn’t Fail
May 18, 2022
The Internet's Grooviest Slideshow of Legendary International Scouts
May 17, 2022
Electronics Industry Bolsters Root of Trust Security Efforts
May 17, 2022 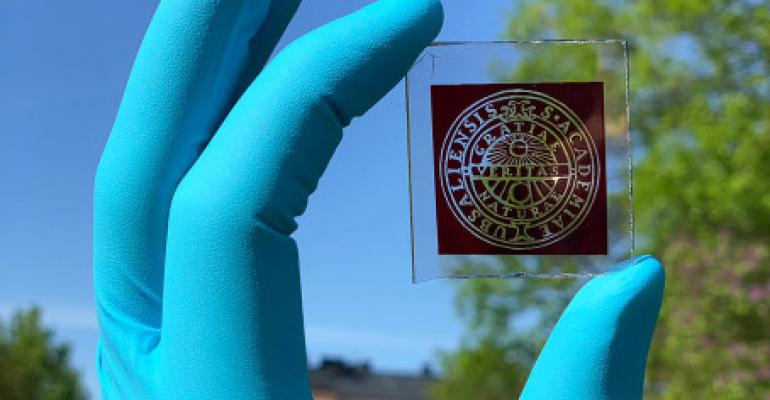 Dye-sensitive cells can harvest energy from indoor lighting to power sensors and other small-form-factor electronics.

Solar power is one of the ways researchers are considering to provide power for the myriad devices and sensors that are rolling out to create the Internet of Things (IoT) and increasingly connected or so-called “smart” homes.

To this end, researchers at Uppsala University in Sweden have developed a new type of solar cell that can harvest light from indoor lamps and could be a viable new energy source for these devices.

The solar cells, which were developed using dye-sensitized materials, can convert up to 34 per cent of visible light into electricity to power IoT sensors, researchers said. Dye-sensitized materials are made of an organic dye which through a chemical process become crystals that  are sensitive to light in the green, red, or infrared regions of the spectrum.

The photovoltaic cells her team developed are based on a copper-complex electrolyte, which gives them their ability to harvest indoor light from fluorescent lamps and LEDs, said Marina Freitag, assistant professor at the Department of Chemistry at the university.

"Knowing the spectra of these light sources makes it possible to tune special dyes to absorb indoor light,” she said in a press statement. “While generating large amounts of energy, these indoor photovoltaics also maintain a high voltage under low light, which is important to power IoT devices.”

Indeed, researchers said that dye-sensitized solar cells are the best option for developing photovoltaics that can still convert light to power in ambient lighting conditions, Freitag said. Scientists are eyeing this type of cell to provide indoor digital sensing for smart greenhouses, offices, shelves, packages, and other smart objects that are used in every-day scenarios, she said.

To further make the new technology applicable to providing power for IoT devices, Freitag and her team also collaborated with researchers at the Technical University of Munich to design an adaptive power-management system for sensors that use them.

"Ambient light harvesters provide a new generation of self-powered and smart IoT devices powered by an energy source that is largely untapped,” Freitag said in a press statement.

The system developed by the collaborative team can intelligently adapt to how much light is available, executing computational workloads according to the level of illumination, researchers said. This allows the power system to minimize energy losses during storage to optimize all of the light energy available, Freitag said.

Through this combination of artificial intelligence and automated learning, she said the solar cell system can reduce energy consumption so as not to waste battery life and thus ultimately provide an efficient source of sustainable energy to devices.

“The combination of high efficiency and low cost with non-toxic materials for indoor photovoltaics is of paramount importance to IoT sustainability,” Freitag said in a press statement.

Researchers published a paper on their work in the journal Chemical Science.

Scientists expect that in the future, billions of IoT devices powered by non-conventional power sources—including solar cells like the ones Freitag’s team developed—will transfer data about environmental conditions, as well as human-machine and machine-machine communications. These devices also can help usher in the next generation of robotics and autonomous systems.