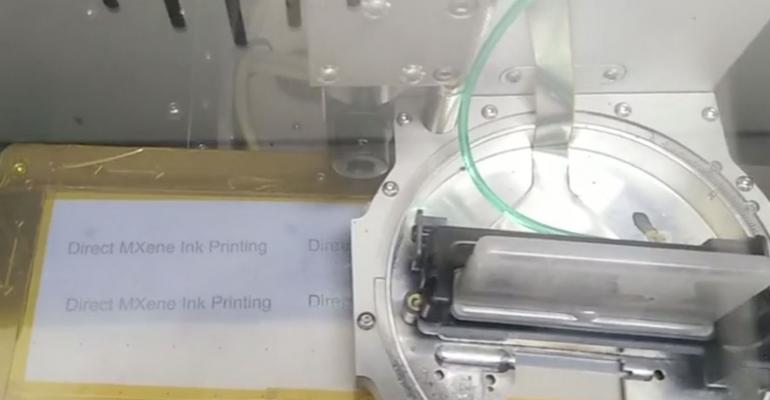 A collaboration between researchers at Drexel University and Trinity College, Dublin, have succeeded in printing a variety of flexible electronic-storage devices using MXene-based ink.

You’ve heard about graphene, the wonder material that’s being used in a diverse range of applications because of its combination of unique properties. Now researchers are doing novel things with another 2D material called MXene, which—like graphene—also is carbon-based and highly conductive.

Some of this most recent work comes from a collaboration between two institutions—Drexel University and Trinity College in Ireland—in which researchers have created MXene-based ink for an inkjet printer that can be used to print flexible energy storage components, such as supercapacitors, in any size or shape.

Conductivity is the Key

While the development of printed electronics is not a new story any more, practical applications are “still limited because of relatively poor conductivity of inks used,” said Yury Gogotsi, a professor in Drexel’s College of Engineering, in the Department of Materials Science and Engineering.

Conductive inks to print electronics already exist, and researchers have been hard at work trying to figure out ways to improve them by using new, more conductive materials like nanoparticle silver, graphene, and gallium. However, a challenge remains for them in that it’s difficult to import these inks seamlessly into manufacturing processes.

Enter MXene, which has metallic conductivity exceeding that of other low-dimensional materials and also is easier to work with, he said.

“Being a 2D material with oxygen-terminated surface, it sticks easily to many materials, including paper,” Gogotsi told Design News. “Moreover MXene flakes form a stable colloidal solution in water without adding any surfactant, unlike carbon black, nanotubes, or other hydrophobic materials.”

A Boost in Conductivity

In those materials, he said, added surfactants stay on the surface of conducting particles after drying on ink, separating the particles and decreasing conductivity. This is not the case in MXene, Gogotsi said, which means the printed pattern gets an additional boost in conductivity. Moreover, strong adhesion to paper, fabric, and some polymers also eliminates the need for sticky glue-like additives in electronic designs, he said.

Knowing these characteristics of graphene, Gogotsi and printing experts at Trinity College worked together to optimize MXene-based inks for printed devices.

“My group has no experience in ink-jet printing, and we also don’t have advanced printers at Drexel University,” Gogotsi explained. “My students showed earlier that MXene in water can be used as conducting ink by filling fountain pens, rollerball pens, and markers with MXene ink. So we collaborated with Professor Valeria Nicolosi’s group at Trinity College, Dublin, whose lab has very advanced 2D and 3D printers.”

One of the issues the Dublin team was able to solve for the Drexel researchers was to find the right concentrations of MXene in water or organic solvent to product good inks, he said.

“Ink for printing must have certain viscosity, not plug printing nozzles, and possess other properties specific to the particular printing process and kind of printer,” Gogotsi explained. The Trinity experts were able to help Drexel researchers solve these problems.

Through this collaboration, the researchers were able to produce and test printed devices using the MXene ink, including a simple circuit, a micro-supercapacitor and some text, on substrates ranging from paper to plastic to glass.

Their experiments proved they could print lines of consistent thickness and also that the ink’s ability to pass an electric current varied with its thickness—both important factors in manufacturing electronics components, Gogotsi said. Moreover, the printouts maintained superior electric conductivity—highest among all carbon-based conductive inks, including carbon nanotubes and graphene, he added. The team published a paper on its work in the journal Nature Communications.

Researchers plan to continue their work to print various devices using their MXene-based ink, including sensors, antennas, and RFID tags, as well as to experiment with printing on various surfaces and materials, Gogotsi said. They also will test color printing with conductive MXene inks, as different MXene compositions—of which researchers can make 30—have different colors, he added.