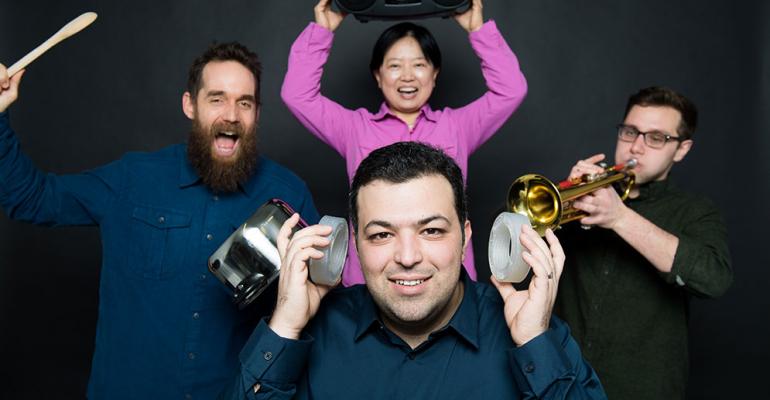 New acoustic metamaterials developed at Boston University can block out 94 percent of noise but still allow for air flow.

Sometimes the world can be a noisy place, especially in big cities where traffic, car alarms, passing jets and the general buzz of city life can seem deafening.

While there already are some solutions to drown out or contain sounds, they often also prevent airflow, which can be limiting for some applications such as jet engines. Now mechanical engineers at Boston University have developed a new metamaterial that can block out 94 percent of noise but still allow for air flow, solving a critical issue with current noise-cancellation solutions, they said.

“[Current] solutions are mostly duct-based and tend to have large physical footprints,” Xin Zhang, a multidisciplinary professor at the College of Engineering who led the research, told Design News. “In our work, we designed an ultra-open silencer that can maintain efficient ventilation while silencing unwanted acoustic waves.”

Zhang and graduate student Reza Ghaffarivardavagh, who worked together on the project, were inspired by their own experience living in various cities to develop the metamaterials, and used their common expertise in mathematics to inform their work.

In the new materials—which are essentially open, ring-like structures— “the silencer performance is frequency selective and periodic in nature and, consequently, may serve as a promising solution for silencing tonal machinery noise from various sources, such as fan noise,” Zhang said.

There also is an option to design the silencing material with “deep sub-wavelength dimensions in the form of a brick or tile of a silencing 'wall' that selectively silences unwanted sound,” he said.

Key to the development of the materials is that they are not a barrier, per se, but more an open conduit, based on silencing the tiny disturbances in the air that create sound, the researchers said.

To develop the metamaterials, researchers calculated the dimensions and specifications that the they would need to have in order to interfere with the transmitted sound waves, preventing sound—but not air—from being radiated through the open structure, Zhang said. They based their calculations on the premise that the metamaterial needs to be shaped in such a way that it sends incoming sounds back to where they came from.

“In our study, the focus was to achieve silencing while preserving the dominant central opening that ensures performance even in the case of forced ventilation,” he explained. “Notably, the silencing performance of our structure is narrow-band and periodic but … it is a promising solution for tonal noise suppression.”

To test their solution, researchers created a structure that could silence sound from a loudspeaker. Based on their calculations, they modeled the physical dimensions that would most effectively silence noises, and used 3D printing to materialize this model in the form of an open, noise-canceling structure made of plastic.

To test the effectiveness of what they built, the team sealed the loudspeaker into one end of a PVC pipe, and at the other end, fastened the tailor-made acoustic metamaterial into the opening.

They turned on the loudspeaker to blast a high-pitched note; however, the metamaterial, ringing around the internal perimeter of the pipe’s mouth, worked like a mute button. When one of the researchers pulled it free, only then could the team hear the annoying screech of the speaker, researchers said.

By comparing sound levels with and without the metamaterial fastened in place, researchers found that they could silence nearly all—94 percent to be exact—of the noise, making the sounds emanating from the loudspeaker imperceptible to the human ear, Zhang said. The team published a paper on their work in the journal Physical Review B.

While the current design at the moment can best be used to cancel applications with “characteristic tonal noise, such as fans or constant RPM rotors and propellers,” Zhang said, the work itself can be expanded for numerous other applications to block out the sound of “pretty much anything.”

“We are now working on both wide-band designs, along with tunable models, which open up new possibilities and applications,” he told Design News.