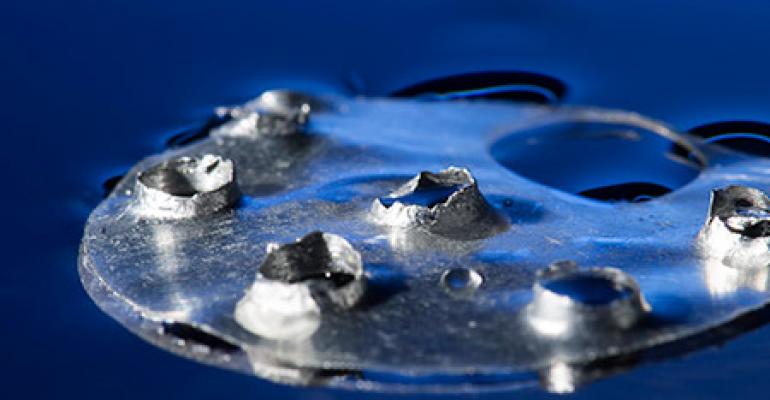 Researchers at the University of Rochester created a metallic structure that does not stay under water even after forced submersion or punctures.

Insects that can survive in water are the inspiration behind a new type of metal developed by researchers at the University of Rochester that is so water-resistant it doesn’t sink.

A team in the lab of Chunlei Guo, a university professor of optics and physics, developed the metal, which in tests showed such a high water-repellent aspect that it would not go under the surface even after being punctured and damaged.

Diving bell spiders and rafts of fire ants inspired the design of the structure—in particular, the way these creatures can survive long periods under water or on its surface. These creatures manage by trapping air in enclosed areas in their bodies.

For example, the diving bell spider creates a dome-shaped web that is filled with air. The spider carries the air between its hydrophobic legs and abdomen, Guo said. In a similar way, fire ants can form a raft in the water by trapping air in their bodies.

Guo and his team developed a way to use femtosecond bursts of lasers to “etch” the surfaces of metals with intricate micro- and nanoscale patterns. Like the insect behavior, these trap air to make the surfaces superhydrophobic, or water repellent. “The key insight is that multifaceted superhydrophobic (SH) surfaces can trap a large air volume, which points towards the possibility of using SH surfaces to create buoyant devices,” researchers wrote in a paper in ACS Applied Materials and Interfaces.

However, the etching alone wasn’t enough to cause a more permanent unsinkable factor; researchers found that after being immersed in water for long periods of time, the surfaces of the etched metal showed a loss of hydrophobic properties.  So the team went one step further and created a structure in which they etched two parallel aluminum plates and faced them inward, not outward, so they are enclosed and free from external wear and abrasion.

Researchers also separated the surfaces of the metallic structure by just the right distance to trap and hold enough air to keep it floating, which acts to create a waterproof compartment. The superhydrophobic surfaces manage to keep the water from entering the compartment even when the structure is submerged in water.

Though the team used aluminum here, the etching process “could be used for literally any metals, or other materials,” Guo said. They tested the metallic structures by forcing them to submerge for two months. Even after this time they immediately bounced back to the surface.

The team even found the structure didn’t sink even after puncturing it multiple times. This is because air remains trapped in the other parts of the compartment or adjoining structures.

The team expects its work can be used to inform the design of metals for ships that will be nearly impossible to sink. It can also be used for wearable floatation devices that remain afloat even after being punctured.