HomeMaterialsGraphene-Based Artificial Throat Could Help Mute People Speak
Recent
Materials
Spooky Halloween Tech Is Here. Just Look at These Doozies
Oct 27, 2021
Halloween? What a Perfect Time to Think About Generating Electricity From Blood!
Oct 27, 2021
Ghosts of Medtech: What Ever Happened to These 7 Medical Devices?
Oct 27, 2021
How to Survive a Zombie Apocalypse
Oct 27, 2021
POLL
America's Supply Chain Crisis by the Numbers
Oct 27, 2021
Want Scary Stuff for Halloween? Check out the Tech for 2021
Oct 27, 2021
How Apple Influenced Medical Packaging
Oct 27, 2021
AAA Finds that ADAS Sensor Vision Permits Crashes 33 Percent of the Time in the Rain
Oct 27, 2021 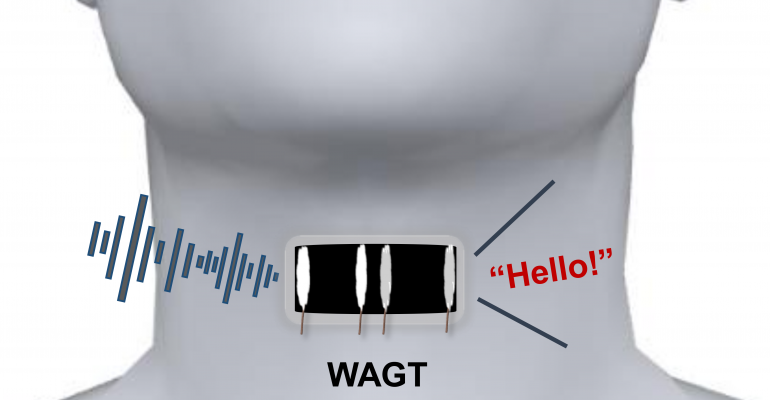 Researchers in China developed a temporary tattoo-like device that can be worn on the neck to help people who have lost their voice speak again.

The ability to create sound using our voices is one thing most people don’t have to think or worry about. However, some aren’t so lucky and suffer injuries to their vocal chords that prevent them from being able to speak.

To help restore voice to those who’ve lost it, researchers in China have developed a wearable artificial throat that can be worn like a temporary tattoo on the neck to transform movements into sounds, they said.

“Most mute people cannot speak due to their vocal-cord lesion,” researchers from Tsinghua University in Beijing wrote in a paper published about their work in the journal ACS Nano. “To assist mute people to ‘speak,’ we proposed a wearable skinlike ultrasensitive artificial graphene throat (WAGT) that integrated both sound/motion detection and sound emission in single device.”

Scientists, including Tsinghua researchers He Tian, Yi Yang, and Tian-Ling Ren, had been working on artificial technology to convert motions into sound—which is basically what the vocal chords do—for some time.

In previous work, researchers developed detectors that measure movements on human skin, such as pulse or heartbeat, and then extended that technology to develop a prototype artificial throat that can covert these movements into sound. However, that initial device was not a viable option for long-term use, because it had to be taped to the skin and thus was uncomfortable, researchers said.

The next generation of that device—the WAGT outlined in the paper-- is the focus of this current work. To develop the device, researchers turned to graphene, a versatile, carbon-based material that combines light weight and strength with high electrical conductivity.

They laser-scribed graphene on a thin sheet of polyvinyl alcohol film and used water to attach the film to the skin over a volunteer’s throat. That device—measuring about 0.6 by 1.2 inches—was connected using electrodes to a small armband that contained a circuit board, microcomputer, power amplifier, and decoder.

“For sound detection, both the motion of larynx and vibration of vocal cord contribute to throat movements,” researchers wrote in the paper to explain how the various elements come together to make the device work. “For sound emission, a thermal acoustic model for WAGT was established to reveal the principle of sound emitting. More importantly, a homemade circuit board was fabricated to build a dual-mode system, combining the detection and emitting systems.”

When the volunteer noiselessly imitated the throat motions of speech, the instrument converted these movements into emitted sounds, researchers reported. The device tested successfully with simple words such as “OK” and “no.”

In the future, researchers aim for those wearing the device to be trained to generate signals with their throats that the device can then translate into more complex speech, they said.