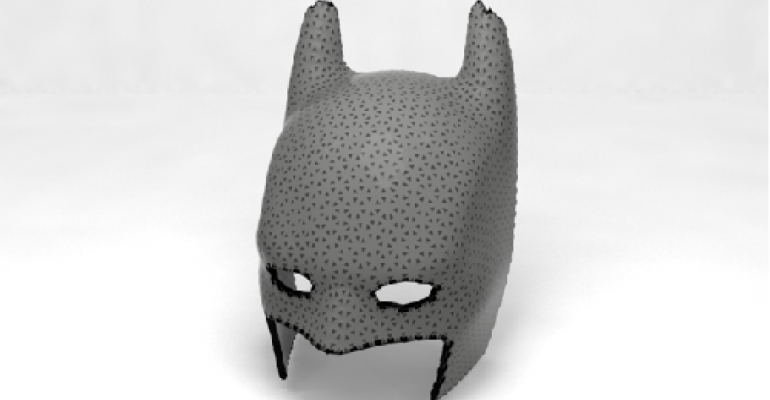 Computer scientists at the Institute of Science and Technology Austria have designed what they called “CurveUps,” or flat sheets that transform themselves from 2D to 3D into smooth-surfaced, free-form objects.

Researchers in Austria have made a breakthrough in materials design and 3D printing to create objects that can self-transform, moving from 2D to 3D without any external influence.

A team at the Institute of Science and Technology Austria has developed materials and a process for creating what they call “CurveUps”—smooth, free-form objects that self-actuate. The work has a number of applications, including for biomedical devices and autonomous robots, said Ruslan Guseinov, a PhD student in the Computer Graphics and Digital Fabrication group at IST Austria who worked on the project.

“Self-actuating objects are such objects that transform themselves,” he explained to Design News. “This implies that they are ‘programmed’ for a certain self-transformation--they ‘know’ the way they need to deform--and at the same time they store enough energy for the planned transformation. But current progress still has room for significant improvement in terms of limitations and ease of production.”

Indeed, previously the range of objects that could free form from flat (ie, 2D) to 3D was limited to those with sharp edges and little, if any, curvature. Also, because the programming was not there yet, the transformation methods were based primarily on folding or processes that lacked precision in how they were controlled, according to researchers.

The team’s work also is a step toward the development of new fabrication technologies that can take current techniques beyond 2D shapes into the third dimension, he added.

“They consist of tiny disconnected tiles sandwiched between two pre-stretched elastic sheets,” he said. “This part is the result of our brainstorming when we had in mind the goal and tried to come up with a simple and effective solution.”

Secondly, the team created software, based on original computational algorithms, to configure the mechanism properly so it could replicate user-input shapes, Guseinov said. “We came up with a general formulation of stability of the structure and an approximation to solve for the stability in a reasonable time,” he said.

The team published a video (below) about their work on YouTube, and presented it at the SIGGRAPH conference in Los Angeles, California earlier this year.

In many ways, the team’s achievement is notable, given the tradition difficulty scientists have had with developing 3D objects that are mechanically stable, let alone can self transform from flat to a particular shape.

In the case of the ICT Austria team, they focused on self-transformation from flat to curved, which Guseinov said broadens the automation possibilities for fabrication.

“Integration with powerful flat fabrication technologies would lead to bringing them onto 3D surfaces,” he said. “For example, one can install an electrical circuit easily on a flat surface, and after the actuation step obtain the circuit on a curved surface. For modern machines it would be otherwise hard to install the circuit directly onto a curved surface.”

The work also paves the way for innovations in transporting objects in flat states—easier than in their fully realized state—and then having them self-actuate when unpacked, Guseinov added.

The team aims to continue their work to overcome some current limitations, including a goal to obtain full control over the actuation of the structure to make it able to be triggered and consecutive by parts, he said.

“In the current design we only guarantee stability once the shape is taken,” Guseinov said. “We want to achieve an almost guaranteed actuation path.”

Researchers also aim to work on a description of the achievability of shapes and to develop a design system to adapt user-input for reproducing the fabrication method, he added.