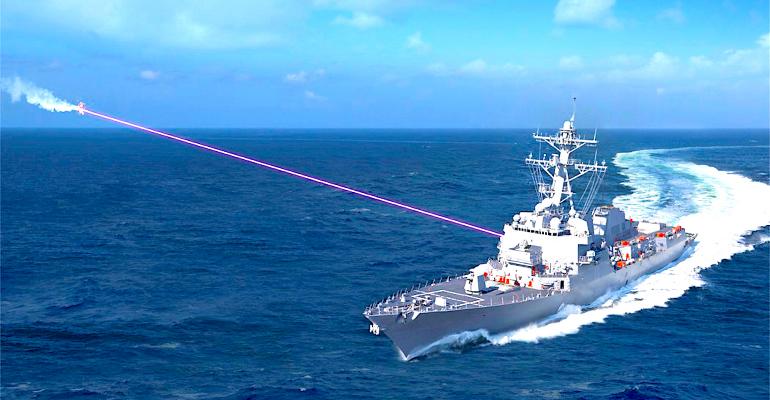 Artist's conception of the HELIOS laser intercepting a target.
Lockheed Martin’s laser air defense system is ready for installation on a warship for real-world testing.

Following a year of testing by the Surface Combat Systems Center Wallops Island, the U.S. Navy is planning to install the Lockheed Martin High-Energy Laser with Integrated Optical dazzler and Surveillance (HELIOS) directed energy weapon on the destroyer U.S.S. Preble.

The HELIOS laser is a 60-kilowatt device that is suitable for downing drones and deterring small boats. Its beam can also dazzle surveillance by aircraft in a lower power setting. Future 100 kW and 150 kW versions of the system could be effective against still more classes of threats, reports Lockheed Martin.

“The goal is to create a directed energy system … that’s for anti-ship cruise missile,” U.S. Navy Rear Adm. Seiko Okano told USNI News. “It’s really another defensive capability so that you don’t exhaust the [Vertical Launching System] onboard and you save those for what you need them for,” she said. “Do you have another weapon system, a variety of weapon systems, that you can add to your arsenal that it can really protect that ship from anti-ship cruise missiles. That’s where we want to get to,” she explained.

Aboard the Preble, the HELIOS system will be integrated into the ship’s Aegis Combat System as another element available for air defense by that system, according to Jeannine Matthews in remarks to reporters at the Surface Navy Association’s annual symposium.

Related: US Navy Successfully Tests a Laser Against a Target Drone

“Completing these significant critical milestones for the HELIOS team and the U.S. Navy brings us much closer to delivering the system to the Navy and providing the Fleet with the capability to counter unmanned aerial threats and fast attack boats today,” said Hamid Salim, vice president, Advanced Product Solutions at Lockheed Martin Rotary and Mission Systems. “This puts us on the path to counter anti-ship cruise missiles in the future. This is a transformational new weapon system. Laser weapon systems are no longer years away; they’re here now.”

Lockheed Martin touts the advantages of directed energy weapons as being their practical inexhaustibility, low cost per shot, and speed-of-light delivery to the target. Another important aspect is the ability to calibrate the laser’s power to suit the situation, effectively letting sailors choose to “set phasers to stun” when a lethal response might be overkill. 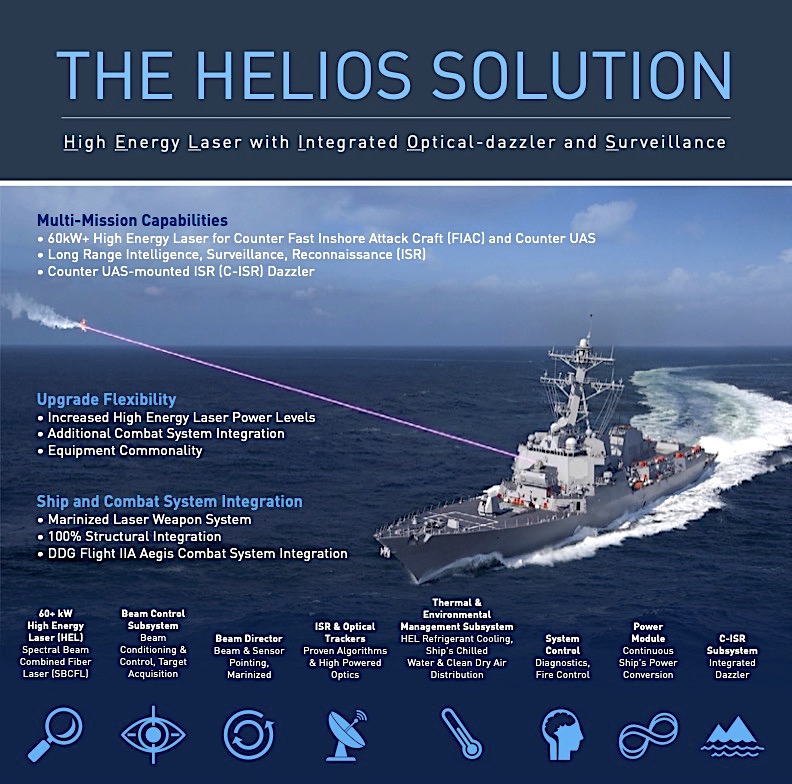 The HELIOS system in particular has been ruggedized for duty at sea, and as mentioned, is built on an upgradeable architecture that will accept higher power outputs later.

“The HELIOS laser weapon system builds on 40 years of combat system engineering excellence,” said Tyler Griffin, Lockheed Martin director of laser and sensor systems. “That is a fundamental change for laser weapon systems, which here to date have been prototypes added to a ship. HELIOS will be integrated into the ship.”