Home>Electronics
Recent
Electronics
NVIDIA Omniverse Brings BMW a 30 Percent Boost in Production Planning Efficiency
May 18, 2021
How Artificial Plants Are a Sunlight-Powered Hydrogen Fuel Cell Game Changer
May 17, 2021
Why is Clock Jitter a Big Deal as PCIe 5 Gen Moves Into the Modern Data Center?
May 17, 2021
Individually, These Robots Are Dumb. But When They Work Together? Awesome!
May 17, 2021
Want a Job? Here Are 21 Hot Engineering Gigs for 2021
May 17, 2021
This Breathtaking Bugatti Hypercar Reveals its 3D Printed Secrets
May 17, 2021
Curious Engineers Need to Understand Field-Based PCBs and L2+ ADAS Systems
May 17, 2021
Big Oil Mines Carbon Capture Technology to Mitigate CO2 Contribution
May 16, 2021

These Are the Most Hyped Technologies of 2018 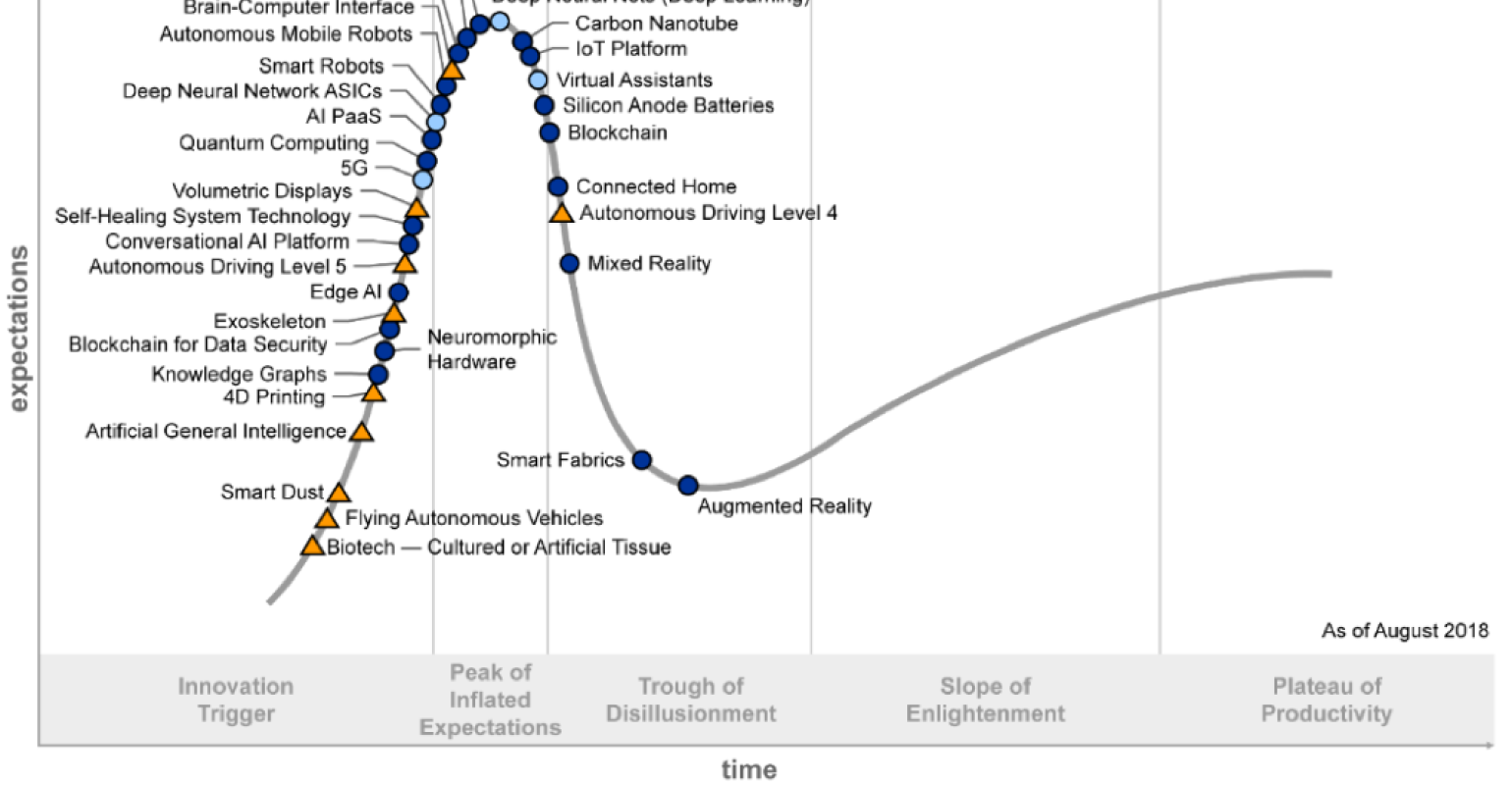 Start Slideshow ›
<p>Widespread artificial intelligence and a rise in do-it-yourself biohacking are among the trends we should see gathering big momentum sometime in the next decade. That's according to the 2018 Hype Cycle report released by global research and advisory firm Gartner. For its latest report, Gartner analyzed over 2,000 emerging technologies and came up with a list of 35 that it believes are “must-watch” technologies for the coming years.</p><p><strong>What Is the Hype Cycle?</strong></p><p>Gartner designed the Hype Cycle to provide businesses with a graphic representation of how technologies move from conception to possible ubiquity. The idea is that if you understand where a technology is on the Hype Cycle, you can get a sense of the risk and rewards associated with adopting it at a given time. Gartner has never released a full methodology on how it compiles its listings, and the Hype Cycle has been criticized as being unscientific and, at times, vague. But that hasn't stopped numerous technology companies from seeking it as a source of guidance over the decades since the first Hype Cycle was published in 1995.</p><p>The Hype Cycle is based on a simple premise, first outlined by futurist Ray Amara: “We tend to overestimate the effect of a technology in the short run and underestimate the effect in the long run.”</p><p>To that end, the cycle features five stages:</p><p><strong><strong>Innovation Trigger:</strong></strong> The kick-off point for a new innovation. This is about the time a technology leaves the lab or university and starts being noticed by media, but has no commercial product behind it yet.</p><p><strong><strong>Peak of Inflated Expectations:</strong></strong> Hype builds as stories of success and failure with the technology begin to emerge. This is when early adopters will really start to jump on the train.</p><p><strong><strong>Trough of Disillusionment:</strong></strong> The honeymoon phase is over. Failures of use cases and failures of expectation begin to emerge that can steer risk-adverse companies away from a technology.</p><p><strong><strong>Slope of Enlightenment:</strong></strong> Now that disillusionment has set in, a technology starts to find its real place and footing. You start to see fewer “novel” applications of a technology and more iterations on proven use cases.</p><p><strong><strong>Plateau of Productivity:</strong></strong> The technology goes mainstream and its value and relevance to the market is clear and taking off. If you're an early adopter or the type to be ahead of the curve, this will be about the time your parents and grandparents start asking if you've heard of a technology.</p><p>So which technologies are the ones to watch? Which ones are peaking in their hype and what others are facing disillusionment and a possible fade-out before they reach mass adoption? Click through the slideshow to find out.</p>
What's got the hype? And what's losing it? The 2018 Gartner Hype Cycle report outlines the current maturity and adoption of technologies and gives predictions of what's on the horizon for AI, Blockchain, IoT, VR/AR, and even battery technologies.

What technologies do you see peaking or failing in the next two to five years? Do you think there's anything the Hype Cycle missed? Let us know in the comments!