Building a World Where Algorithms Know Your Face 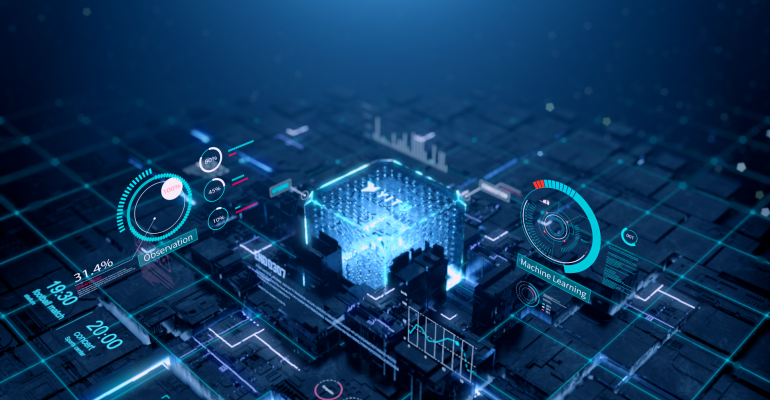 China has seen an explosion in the use of facial recognition. Startup Yitu is the latest to apply the AI technology to a variety of use cases including tracking, medical diagnosis, and even ATM withdrawals.

What if you could withdraw money from an ATM just by walking up to it and having it recognize your face? If it works well and securely it would offer huge conveniences for customers. But are we ready to let artificial intelligence algorithms track our movements and recognize our faces?

Chinese artificial intelligence startup Yitu Technology is betting we are. The company has recently rolled out a series of AI algorithms aimed at leveraging facial and image recognition for improved security, enhanced consumer experiences, healthcare, and even smart cities.

Speaking from the 2018 GTC Conference, where the company made its series of product announcements, Dr. Shuang Wu, an AI research scientist at Yitu, told Design News the company began in 2012 with an initial focus on computer vision-based algorithms. Today, Yitu has expanded its expertise into a variety of industries including automotive and healthcare and has also branched into developing chip hardware for AI algorithms.

The company's banking solution, for example, allows any customer to make ATM transactions using their face instead of a bank card and PIN number. “We were the first ones in China, probably in the world, to apply face recognition to ATMs,” Wu said. “Obviously there are a lot of technical challenges in terms of trying to make it hack-proof. We have live face detection, infrared cameras, and solutions for various lighting conditions. All those things together provide a secure solution for the ATM.”

According to Yitu, all of the major banks in China have adopted this technology to some degree and it is now deployed in 12,000 ATMs around the country. Wu added that banks are also using the technology for customer ID verifications. “Normally you'd have a teller verifying ID's. Now we have an algorithm doing the same thing, helping the teller to verify that it's the same person.” He said there has even been growing discussion in China of making AI-assisted customer identification a legal requirement for banks.

Banks in China have been adopting facial recognition technology since 2015, but there has been a surge in rollouts in recent years. In an article on its own decisions to roll out facial recognition into its ATM's Agricultural Bank of China (ABC) touted an enhanced customer experience and enhanced security as primary motivators.

While face recognition for biometrics (i.e using your face to unlock your phone or laptop) has been around a while, Wu said that expanding facial recognition into the public sphere in such a large way requires a lot more consideration. “In the past systems like these were very brittle because as an algorithm programmer you have to anticipate all sorts of different situations. Now as long as you have the data you can do it,” he said.

“The good thing about face data is the labeling cost is low,” Wu added. “But of course you have different situations that will require different tradeoffs. There are cases where recall is the most important metric. For example, you might have a blacklist set up for an office where you don't want certain people to come in. There it's less important to mistake someone for someone on the blacklist occasionally, that's okay. But you don't want people on the blacklist walking through. For ID purposes you don't want to make false positives.”

In an ATM for instance, Wu said it's okay to have an ATM occasionally reject an actual person by failing to identify them. What you don't want however is having any stranger be able to walk up to the ATM and withdraw money. “The need for precision is very high in that instance,” he said. “For other cases the speed is another issue.You want the algorithm to be fast; you don't want people standing around waiting at a door or access point, for example. So having low latency becomes a requirement.”

Yitu has rolled out a series of applications for its facial recognition algorithms. Included in the company's product portfolio: an “intelligence workplace” solution for tracking activity in offices and offering real time alerts for individuals; customized shopping experiences that use your facial data to keep track of metrics such as your consumer behavior and where you like to go in a mall; AI assisted diagnosis via medical imaging; and a cloud-based smart city solution that monitors and adjusts traffic flow based on various road conditions. “If there's an accident we can redirect traffic just by changing the traffic lights,” Wu said, offering one example. “The traffic light and traffic cameras are so close physically, yet so far apart virtually, so we have to connect them somehow.” In testing Yitu says it has been able to increase traffic speeds by 11 percent.

Chinese interest in facial recognition technology has exploded in recent years, driven by concerns over public safety and security. A recent Washington Post feature discussed China's efforts to create an “omnipresent video surveillance network to track where people are and what they're up to” by leveraging everything from ATMs to surveillance and traffic cameras. Railway police in China have already been able to apprehend criminals hiding in plain sight thanks to smart glasses with built-in facial recognition technology. In 2017, Chinese authorities reported dozens of criminals, including a man who had been wanted for 10 years, were caught at a beer festival in Qingdao, China thanks to facial recognition cameras.

Putting aside law enforcement applications, the idea of ubiquitous facial recognition still naturally raises privacy concerns. But Wu said the right amount of education should assuage these issues. “First of all you need government and agencies to regulate for sure,” he said. “Laws are always lagging behind tech, so you need to educate regulators and the general public. In terms of privacy, facial recognition is not automatically going to affect privacy because we can recognize you as a regular customer without knowing your identity.”

Tracking faces, but not attaching faces to personal data? That notion may be a hard to sell for those of us who feel our face is inextricably linked to our identity. But Wu offered another way of looking at it. “Another way to see it is you are already walking around in public domains; it's just that before the technology it was harder for people to track you or know who you are. If you are going to the same store very often, for example, the employees will recognize you. Is that a violation of your privacy? Hardly.

“It's more about making it clear what privacy means and what data is not allowed to be transmitted. Like where is your privacy expected? If you walk into McDonald's is your privacy in any way violated? I don't know. And look at what you're doing online. You're already doing a lot of stuff that Facebook and Google are tracking.”

Yitu is currently expanding its offerings in Southeast Asia, the Middle East, Africa, Europe, and is also looking into U.S. markets where the company sees business opportunities. But of course each region brings its own challenges, not only in terms of social concerns and expectations but also government regulations. But Wu does not look at these as roadblocks, merely opportunities to educate the public on the potential benefits of the technology. “You have to make people realize and understand what privacy is and what to expect in different scenarios,” he said. “Then they will go 'I'm walking in there and I know what's going to happen and I don't feel like I'm being watched without my knowing.' ”