At 95, John Goodenough Is Still Searching for Next Big Battery Breakthrough 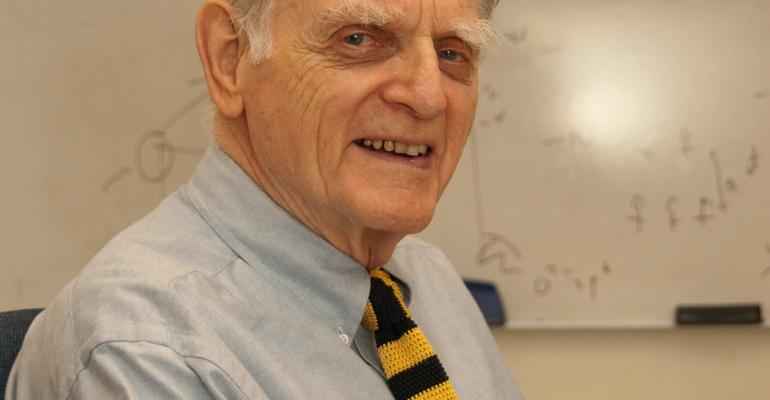 Winner of the Design News Lifetime Achievement Award, John Goodenough, has touched billions of lives with his invention of lithium-ion battery technologies. But Goodenough says he’s not done innovating.

Forty years after inventing battery chemistries that have touched the lives of billions, John Goodenough is still on a mission.

Goodenough, recipient of the Design News 2018 Golden Mousetrap Lifetime Achievement Award, has certainly earned the right to kick back and enjoy the fruits of his labors. Starting in the late 1970s, Goodenough is credited with having co-invented a succession of battery chemistries that may turn out to be the most important of the past hundred years. First, there was lithium cobalt oxide, which served as the power source for countless cell phones and laptops. Then, he co-invented manganese spinel lithium batteries, now employed in tens of thousands of hybrids and electric vehicles. Later, he developed lithium iron-phosphate chemistries, which continue to serve in products ranging from handheld power tools to plug-in cars to grid storage systems.

But at 95, Goodenough isn’t finished. As a professor of mechanical engineering and material science at the University of Texas-Austin, he continues to work, and to search for the next big battery breakthrough.

“If you charge fast, with a liquid electrolyte and a carbon anode, you plate lithium on it and get dendrites,” he told Design News. “And then you get problems. Today, the solution is to charge overnight. But with an electric car, you don’t want to have to charge overnight. You want to drive up and get charged in 10 minutes.”

To accomplish that, Goodenough is working on a solid state lithium-ion battery. That is, no liquid electrolytes, no dendrites, no overheating. And very fast charging.

Goodenough knows that’s a tall task. “People have tried to make a solid state battery, and they could only do it with very thin films and not much capacity,” he said. “It’s a very tricky problem. But I believe it will be ready in five years.”

Colleagues say that if anyone can do it, Goodenough can. “He’s an incredibly bright physicist and materials scientist,” Michael Thackeray, who co-invented manganese spinel chemistries with Goodenough a generation ago, told Design News five years ago. “He’s been involved in all the major lithium technologies.”

The Long Road to Success

Indeed, Goodenough is recognized for his brilliance, but to hear him tell it, he was lucky.

Goodenough grew up in a Connecticut farmhouse where education was stressed, and was sent on scholarship to the Groton School, a private boarding academy in Massachusetts, at age 12. When his parents divorced, he never returned home. He finished at Groton, studying Latin and Greek, then entered Yale University, majoring in math and philosophy.

“I was dyslexic as a child and I couldn’t read very well," he recalled. "I wasn’t going to major in history or English. So I did mathematics.”

After Yale, World War II intervened. Goodenough served in the military as a meteorologist and developed a passion for science. He applied to the University of Chicago to study physics after the War ended, earning a PhD there. But in 1952, his career took an unexpected turn. PhD in hand, he joined Massachusetts Institute of Technology’s Lincoln Laboratory, where he worked on massive computers for the Cold War effort. Gradually, he transitioned from physicist to material scientist to engineer. “I was introduced to electrical engineers and ceramists,” he said. “I had the good fortune of being in a lab where all these people came together.”

That experience served him well when he moved to the University of Oxford in England in 1976. There, he began his legendary string of successes with lithium battery chemistries. Working with grad students in 1978, he focused on lithium cobalt oxides. “We didn’t know that you weren’t supposed to be able to get such a big voltage out of it,” he remembered. “But because I didn’t know that, we went ahead and did it. And it was stable. Sometimes, you do the right experiment for the wrong reasons.”

Later, he and Thackeray turned their focus to the so-called manganese spinel chemistry, succeeding hugely again.

At the time, Goodenough never guessed the applications for his chemistries would be so stunningly broad. “You don’t plan a career,” he explained. “It just happens. You just do what’s in front of you. Did I know what this would become? No, I didn’t. Not at all.”

Today, he hopes fortune will smile on him again, as he continues his work on solid state battery technology. Automakers are eyeing him and others and they race to make the battery that that could eliminate the issue of electric car charging time.

“Now I’m having the fun of realizing that there’s a whole new area of electrochemistry ahead of me,” Goodenough said. “We’re working to make the battery that will take the internal combustion engine off the road.”

Goodenough remains on a mission for the betterment of mankind. And he’s optimistic it will happen -- if not in a production car anytime soon, at least in prototype vehicles. “I’m 95, but I think we can get it done in five years,” he told us. “I’m not folding up my tent.”