Up in a Down Economy 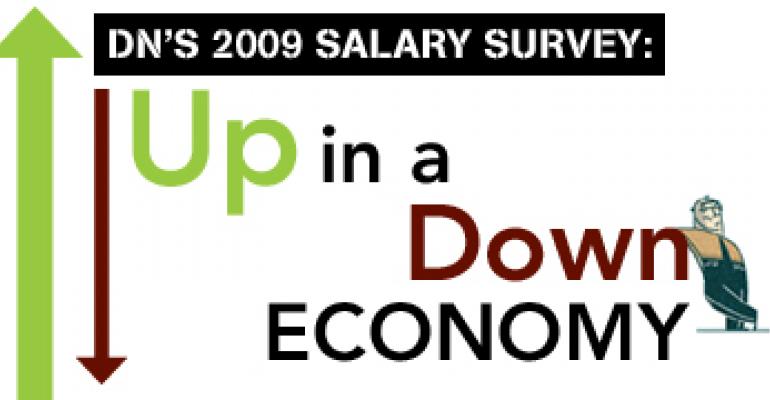 Scroll down to see the latest results from our Salary Survey!

If you didn't follow either bit of advice, there are some things to consider that might help to maximize your earnings.
Here are some indicators from our latest salary survey on the some of the key factors that can help boost your salary:

But even for workers who've been able to stack the deck in their favor to maximize their paycheck, the past year hasn't been exactly a stellar one for design engineers and their compensation. Not that we had to tell you that. The results of this year's Design News salary survey, which looks at compensation for design engineers across a variety of factors ranging from geography to education, should come as no surprise.
They merely confirm the headline news: Companies are looking for ways to streamline their operations and cut costs, and employee compensation has been one of the key line items under attack.

To wit, nearly half of you (47 percent) report that you received no raise this year, while 15 percent said you were whacked with a pay decrease that averaged 20.6 percent. For the lucky one-third who eked out a raise, the average was 4.5 percent. One third told us that your bonus was cut, and a similar percent reported that you experienced a reduction in your benefits. That's a big comedown from the previous year's salary survey, when three quarters of you reported an average pay increase of 5 percent. Moreover, only 2 percent reported a decrease in salary or benefits.

Layoffs also continued apace during the economic slowdown, with two thirds of respondents reporting that their companies have laid off engineers this past year. Of those companies who had layoffs, the average percentage of the engineering department getting pink slips was estimated at 17 percent.

It's Not Just about the Money

The good news is that it's more than just high salaries that keep engineers motivated. In fact, "salary" ranks a lowly number seven on the list of factors that contribute to your job satisfaction. The top three things (in rank order) that engineers say get them revved up about their careers are: problem solving, technical challenges and the opportunity to be creative. That's significant, because these three things in many ways define the very essence of what it is to be an engineer.

"I'm a total geek; I love what I'm doing," says Gary Noyes, a senior engineer for Human Space Flight Programs at Oceaneering Space Systems. With an engineering career spanning more than 30 years, Noyes is now a lead hardware engineer for life-critical subsystems and has been involved in projects as cool as the development of the space suit used for deep-space missions.

Noyes is so jazzed about his career that he says he even wakes up in the middle of the night solving problems. "I'll probably never retire," he confesses.

Another Gary (last name Moore) just might never retire himself, though he keeps planning on it. In the process of winding down a long and successful engineering career in the medical field, three years ago at the age of 65 he was convinced to take on a new position as head of the engineering department at medical device maker Sterilucent. "The company received a government contract to build sterilization devices for field hospitals and we'd been tasked with coming up with a production process that involves moving particles in a vacuum," says Moore. "It's been one of the most challenging things I've ever been involved with, but it's been fun."

Though "fun" may not be the first adjective most people think of to describe their work, the satisfaction level among design engineers is almost enviably high. Half of the survey respondents report that they are "extremely or very satisfied" with their career choice, with only 15 percent reporting that they are not satisfied.

Nearly one third reports that they are "happy where they are," and are not actively (or even passively) searching for a new opportunity. Moreover - and possibly the best indicator of just how positive design engineers feel about their careers - three quarters say they would recommend engineering as a career choice to their children and friends.

Download Design News' complete salary survey results, including even more data for you to see how your compensation compares to that of your engineering peers.