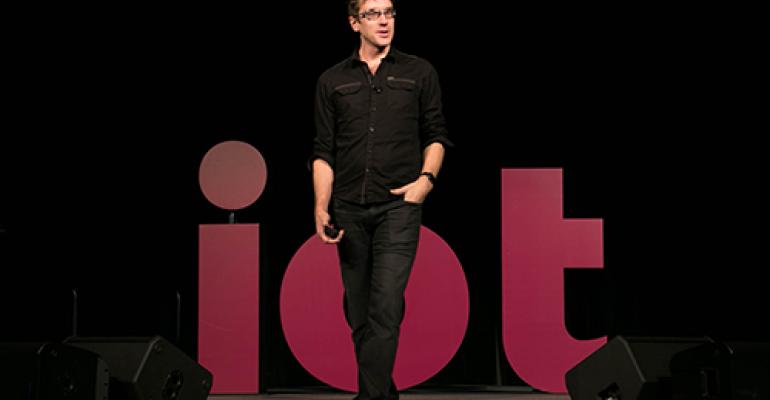 A noted hacker and futurist at the recent IoT Emerge 2016 show in Chicago warned that engineers creating Internet of Things applications mustn’t slow the pace of innovation due to fear of cyber attacks.

Pablos Holman, who has worked on machines ranging from fission reactors to mosquito-killing lasers, said that security has been an issue since the birth of the PC, and engineers have always successfully found solutions to the chaos caused by intruders. “If we become digital Luddites and get paralyzed and fail to advance, then technology will pass us by,” Holman, who works at the Intellectual Ventures Laboratory, told an audience of about 200 engineers at the show. “It’s really important not to be fearful, not to be paralyzed by the potential for problems. We solve problems.”

While on stage during a keynote speech, Holman took a few seconds to pick a mechanical lock, and then noted that the lock is still popular among millions of consumers. “A few people care, and they go out and purchase a better lock,” he said. “But the rest of us don’t care enough to change it. It shows that if you have a need for better security, you’ll get it. There are people out there to help you.”

In a subsequent conversation with Design News, Holman cited recent high-profile cyber security failures, and concluded that the problems posed by those failures weren’t catastrophic. The recent distributed denial of service attack that took down websites at Amazon, Netflix and Twitter created fantastic headlines, but little lasting damage, he said. He added that news stories heighten public fear, largely because most people don’t understand what a distributed denial of service attack is. Similarly, he pointed to the infamous Y2K scare at the turn of the century, saying that the fears far outweighed the actual damage.

“If you don’t understand it, if you don’t know the bounds of it, it can create fear,” he noted. “People say, ‘If they can take out Netflix, can they take down the power grid? Are people on life support in hospitals going to die?’ Those are the kind of dark fantasies people have.”

IoT Security: One Size Does Not Fit All. The Internet of Things ranges from homes to cars to factories and jet engines. Clearly, the security requirements of these systems vary. How can an IoT system designer choose the most appropriate security for their situation? Learn more at ESC Silicon Valley, Dec. 6-8, 2016 in San Jose, Calif.  Register here for the event, hosted by  Design News  ’ parent company, UBM.

Holman said that cyber attacks are inevitable, but added that engineers are always learning from them. Moreover, IoT engineers get to draw on the many years of experience provided by the PC industry. “We’re not starting from scratch here,” he said. “We have the benefit of hindsight. An IoT is just a little computer with sensors hooked up to it.”

Connected Devices & the IoT. Power is a critical resource that prevents large‐scale adoption of the many billions of IoT and wearable devices that are projected to dominate our everyday lives. Learn about IoT and wearables enablement using power electronics and energy harvesting technologies at  ESC Silicon Valley  , Dec. 6-8, 2016 in San Jose, Calif.  Register here  for the event, hosted by  Design News  ’ parent company, UBM.

The worst mistake engineers can make is to look at the security risks and decide that benefits of innovation aren’t worth the effort. “In the end, we haven’t seen a catastrophic problem yet that was so bad we couldn’t recover from it,” Holman said. “So we might encounter a problem, and it might be a little bigger than the last one, but we have to solve it and keep going.”

Senior technical editor Chuck Murray has been writing about technology for 32 years. He joined Design News in 1987 and has covered electronics, automation, fluid power and autos.