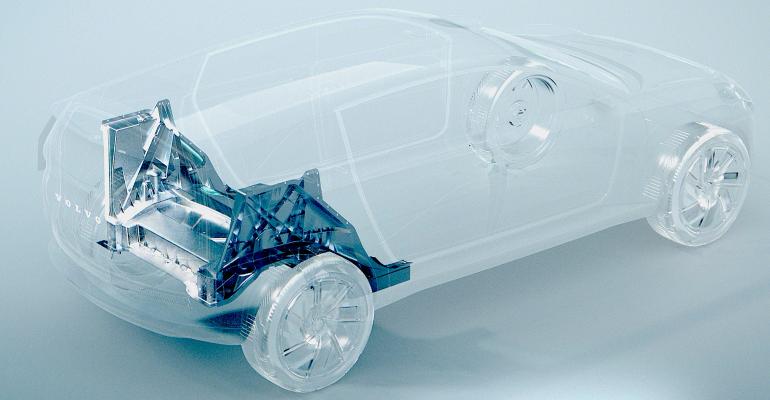 The megacasting replaces many stamped parts at the rear of this Volvo's chassis.
Giga Press maker Idra explains exactly why it was so hard to build a press big enough to cast whole sections of a car.

Tesla provided our first glimpse of the Idra Giga Press and the gigantic castings that it can produce to create an entire car chassis from only a few parts. Indeed, Tesla boss Elon Musk said that employing this technology can ultimately eliminate 370 different parts from the Tesla Model 3.

Now Volvo and its premium EV brand Polestar are joining in, with the adoption of the Giga Press to create the confusingly named megacastings.

Volvo outlines the benefits of the system for its cars in a video. “The introduction of megacasting, a manufacturing process whereby a large number of parts is replaced with one single large aluminum casting, will benefit us in many areas and help us achieve our goal of being a climate-neutral company by 2040,” states the narrator in Volvo’s video.

“The process goes like this: molten aluminum is forced into a high-pressure mold. It solidifies as it cools and is then dipped in water to speed up the cooling process. After some laser cutting and quality checks, the parts produced using this process will eventually become part of the floor structure in our new electric [model] range.”

This compares to the riveted and bonded aluminum structure that Volvo subsidiary Polestar employs in its new Polestar 5 sedan. In that car’s structure, we can see a multitude of parts in the rear body structure where the megacasting is a single piece. Additionally, the process of connecting all those parts on a jig adds complexity to manufacturing. 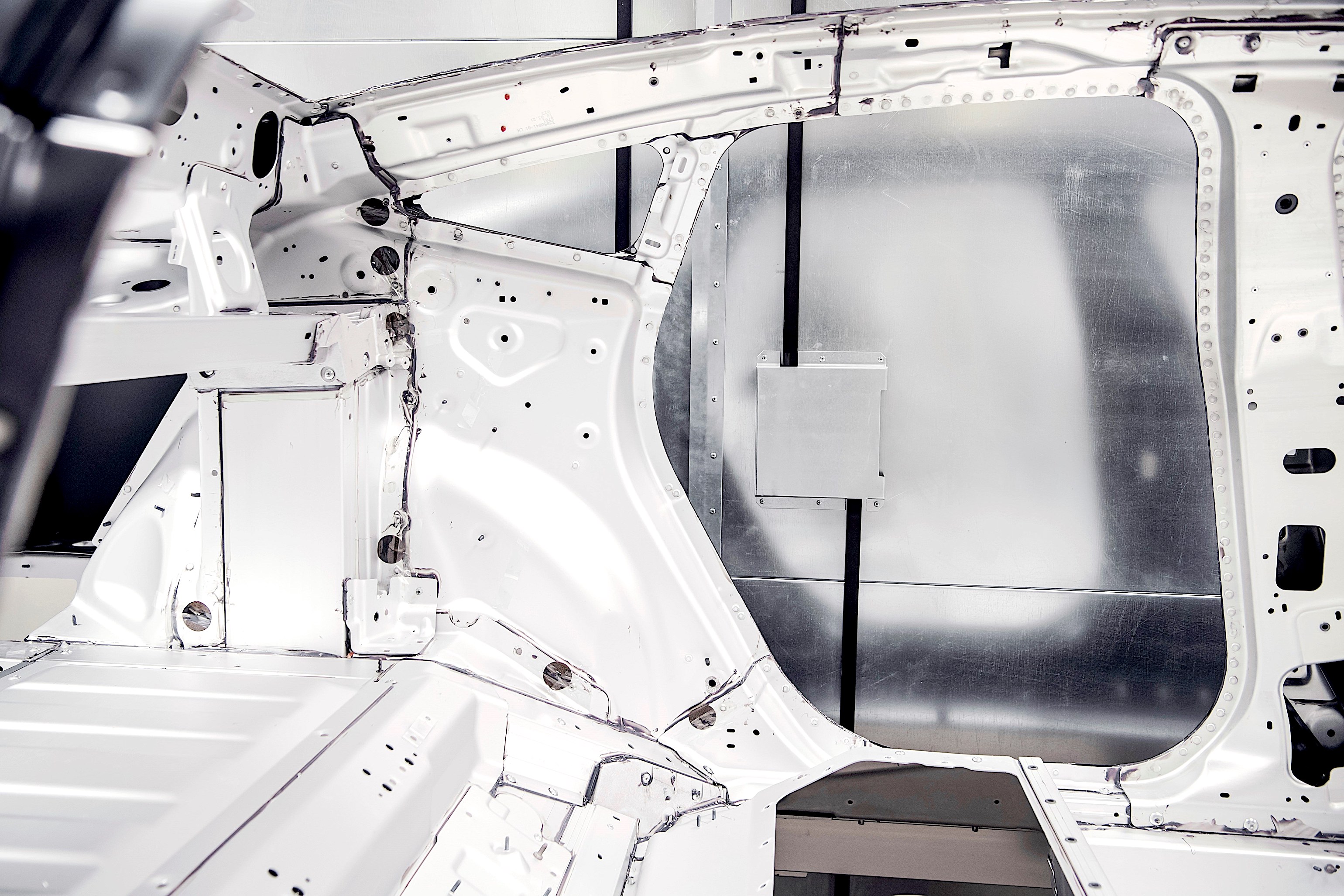 This rear section of the Polestar 5's body-in-white is made of many stamped aluminum panels that are bonded together.

As with Tesla, Volvo will reap benefits from the resulting consolidation of many parts into a few parts, according to the video. “This process significantly reduces the number of parts produced and allows for greater design and production flexibility. Megacasting also helps our sustainability ambitions, as it reduces our environmental footprint across production, gives greater potential for recycled content, and reduces the weight of our cars, which in turn reduces energy consumption and improved energy efficiency.”

Such obvious benefits, now endorsed by both Tesla and Volvo, could leave us wondering why this approach hasn’t been used previously. The answer is that creating megacastings is hard and designing the Giga Press needed to do the work was harder, according to Riccardo Ferrario, Idra general manager. 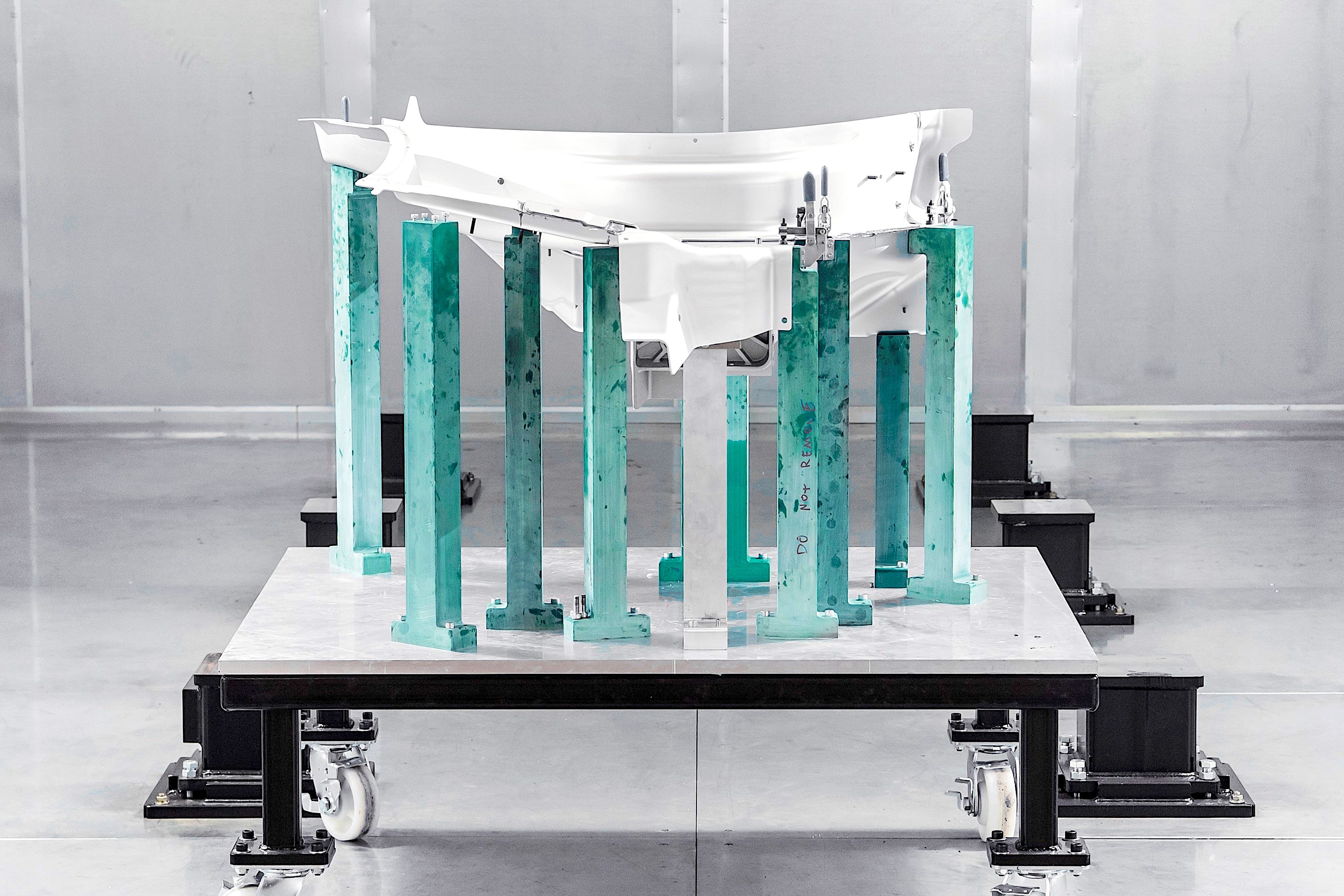 This aluminum chassis stamping for the Polestar 5 rests in an assembly jig so it can be bonded to other parts.

That’s when he conceived the Giga Press project. “The idea was to make the largest single-piece castings in the world,” Ferrario explained. “How big can the part be? How many cavities in the die? What is the largest possible part that can be produced for making cars? Two meters long and one meter wide was the answer.”

Idra’s engineering department explained the necessity of designing a new system for injecting molten aluminum into the die cavity. “Why can’t the machine simply be bigger, but the same?” wondered Ferrario.

“Because our aluminum must make a long trip inside the die cavity before reaching the farthest point to be filled out,” explained Fiornzo Dioni, engineering department manager. But that was only the beginning. “I need super big platens, tie bars, and totally new hydraulic motors,” he added. “We will need to make simulation studies and we must have someone from our partner company for hydraulic innovation. Somebody needs to go find new suppliers and at the same time we must make a prototype and we must test it.”

Oh. That’s all. Which explains why this hadn’t been done before.