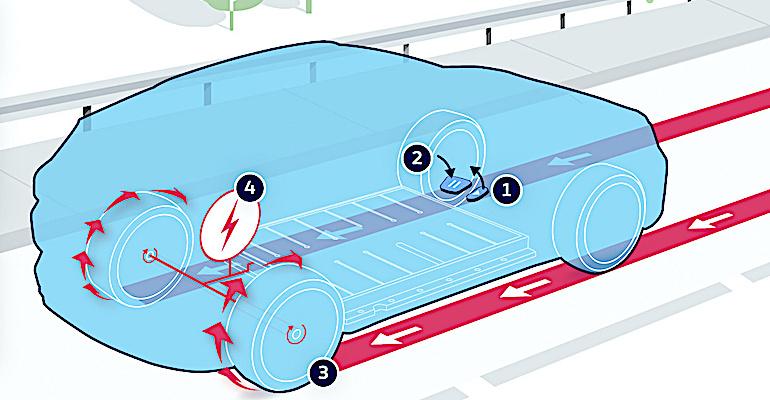 Part of electric vehicle efficiency comes from the ability to recover, rather than waste, energy when braking.

Battery electric vehicles and electrified hybrid vehicles recover energy that would otherwise be turned to heat by their conventional friction brakes.

When the driver lifts off the accelerator pedal and applies the brakes, electrified cars turn their electric motors into generators and converting kinetic energy into potential energy stored in the car’s battery. Volkswagen has thoughtfully released a primer outlining the function of such systems, as employed by the company’s new ID.4 EV.

For more stopping force than 0.3 g, which is a moderate stop, and for stopping at low speeds, the friction brakes take over. Blending the stopping force between these two systems is a complex calibration task for engineering teams.

Similarly, sometimes drivers just want to coast along at about the same speed when they lift off the accelerator, so the computer also has to decide when and how much to apply regeneration in that situation.

These decisions are weighted by a few factors. The vehicle manufacturer guesses at its customers’ preference for whether the EV should feel more like driving a gas car or if it should regenerate more authoritatively. Many manufacturers let the driver choose how aggressive the regeneration is by pressing a button or by changing the position of the gear selector. 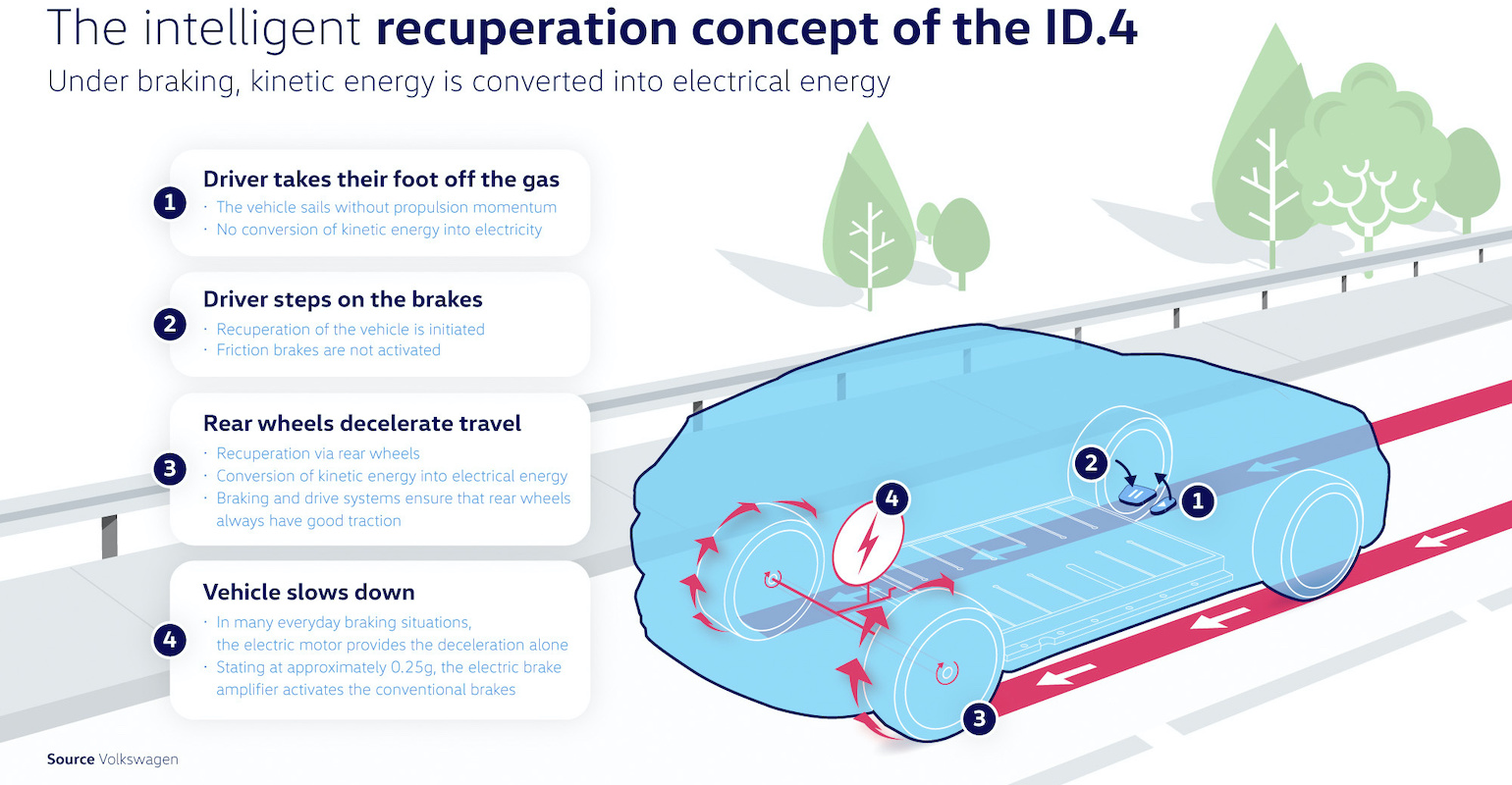 Volkswagen, for instance, opted to make the ID.4 feel like a familiar gas-powered car, so when the driver lifts off the accelerator, the vehicle coasts rather than regenerating electricity for the battery.

“The coasting function, whereby drivers take their foot off the accelerator pedal early on, makes for relaxed and predictable driving,” the company explained in its technology primer. “Should drivers want to decelerate more, they step on the brake pedal and activate brake energy recuperation.”

Volkswagen ID.4 drivers can also choose to operate their EVs more like golf carts, by flipping a rocker switch on the gear selector from “D” (for drive) to “B” (for brake). When they do this, the car goes when they press down on the “gas” pedal and slows when they lift off. This can make stop-and-go traffic easier, as the driver never has to move from the accelerator to the brake pedal.

But what happens when the driver needs to stop? Volkswagen helpfully explains:

“During the majority of everyday braking maneuvers—up to around 0.25 g of deceleration—the electric drive motor performs the braking alone, while the electric brake servo only activates the friction brakes in situations that demand more stopping power. The transition from generator-based to hydraulic braking goes almost unnoticed, thanks to highly accurate and swift brake and drive system control.” 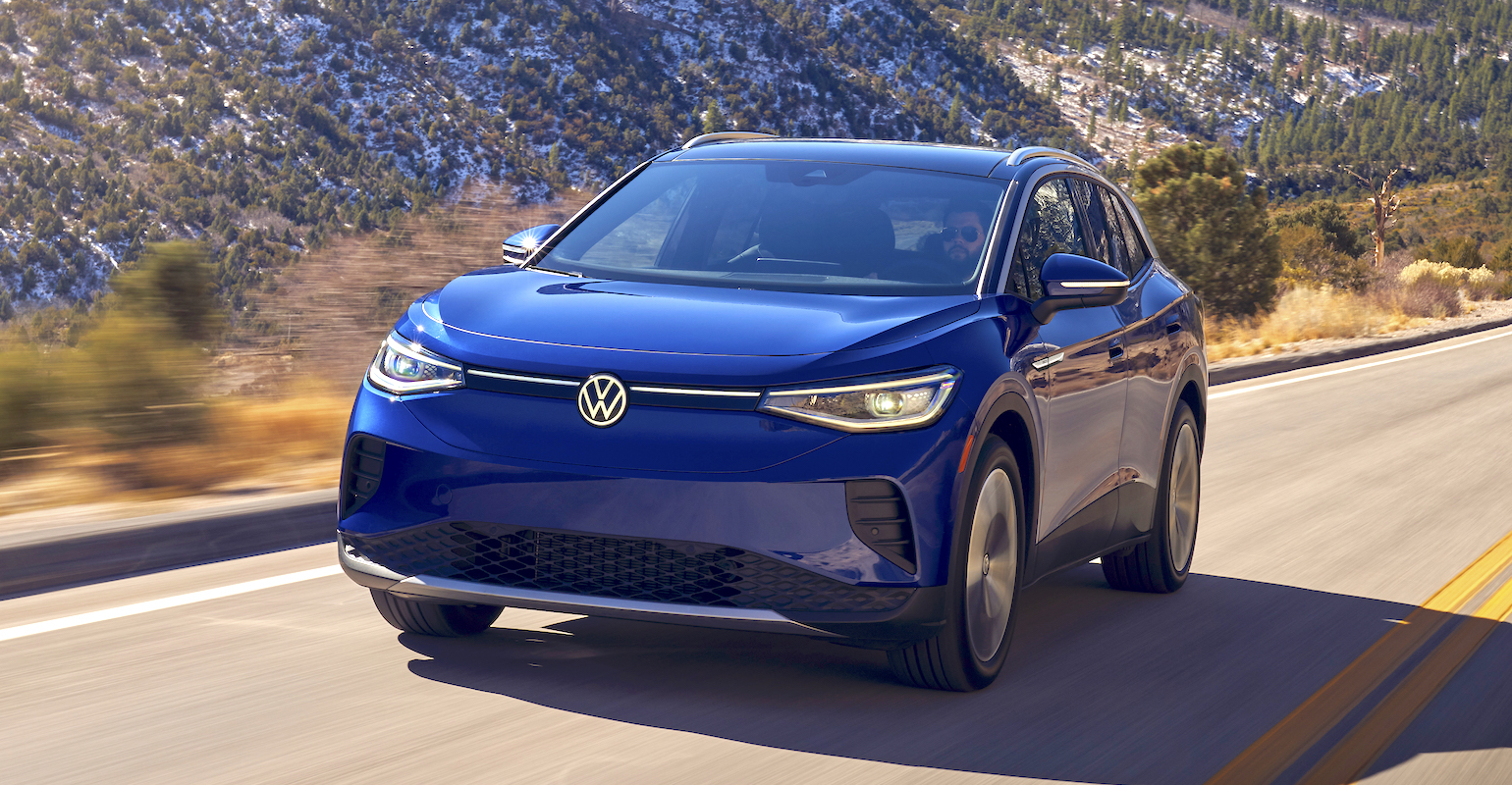 One challenge, according to VW, is ensuring that there is enough traction at the drive wheels to support the regeneration. In recent Design News snow driving tests of the Audi e-tron and Ford Mustang Mach-E electric crossover SUVs, we found that the Mustang could break the traction of its rear tires when the driver lifts abruptly off the accelerator pedal while driving in one-pedal, heavy-regeneration mode.

When this happened, the stability control system intervened to straighten the squirming car, but it seemed like the regeneration should have been better calibrated to recognize the available grip.