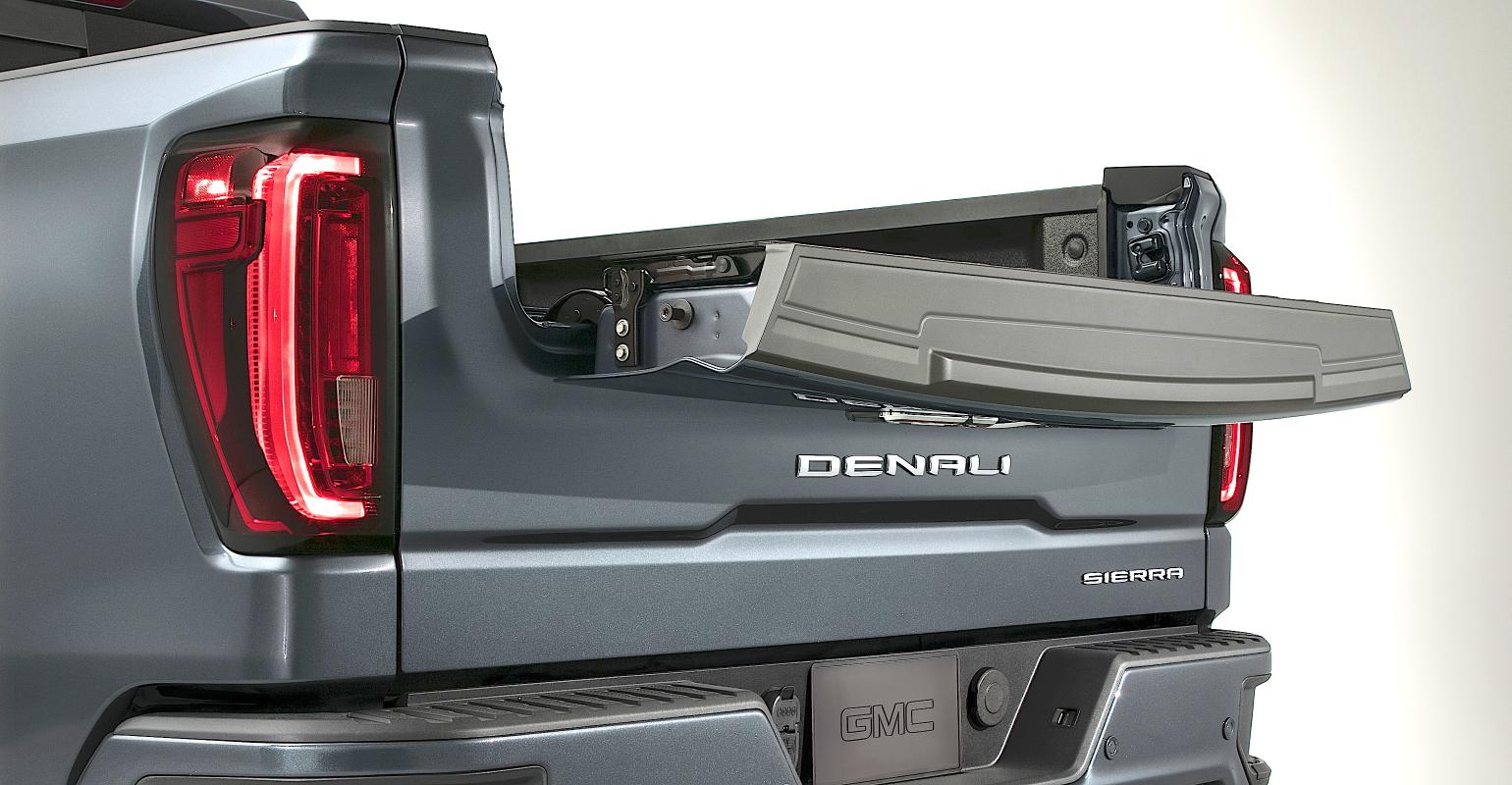 General Motors debuted its MultiPro tailgate on the GMC Sierra Denali in 2019, and after spending time with the device during our recent Design News testing of the Sierra, we became curious about the genesis of the tailgate.

GM's Chevrolet Truck division used to run television commercials featuring NFL Hall of Famer Howie Long ridiculing Ford's tailgate step solution, so we were curious to test the company's own solution. The tailgate incorporates a mini-gate inside it, and the hinges allow the two sections to be arrayed into an impressive variety of configurations, including a step to aid climbing into the bed. We wondered whether these configurations are gimmicks, worthy of derision in competitors' commercials, or whether the MultiPro actually works as advertised.

After a week of putting the Sierra through its paces, we were impressed by the flexibility, ease of use, and all-around practicality of the design. Unfortunately, with the pandemic, there was no college football tailgating opportunity to try its seating configuration extensively, but that layout, like all the others, is genuinely useable. Even the grab rail that extends to aid in climbing into and out of the bed is simple to operate. These achievements led us to wonder how GM's engineers accomplished the task, so we asked lead integration engineer Derek Patterson to describe how the MultiPro evolved from concept to the finished product that we experienced

Design News: What was the original concept for the MultiPro? What were the goals and did you have some crazy ideas that just turned out to be impossible or impractical?

Derek Patterson: The concept of the MultiPro was first created by two talented individuals in General Motors’ Concept Vehicle Garage.

Al Butlin, a Technical Fellow, and Jim Gobart, a master fabricator, built the concept when they were given the question “how can you make the pick-up box more usable”.

Their answer was a gate essentially split in half, with the upper half containing a step to get into the pickup bed. This early version had manual latches and a full-width step.  The gate was taken to a few customer clinics where it was well-received and generated a lot of initial customer interest. 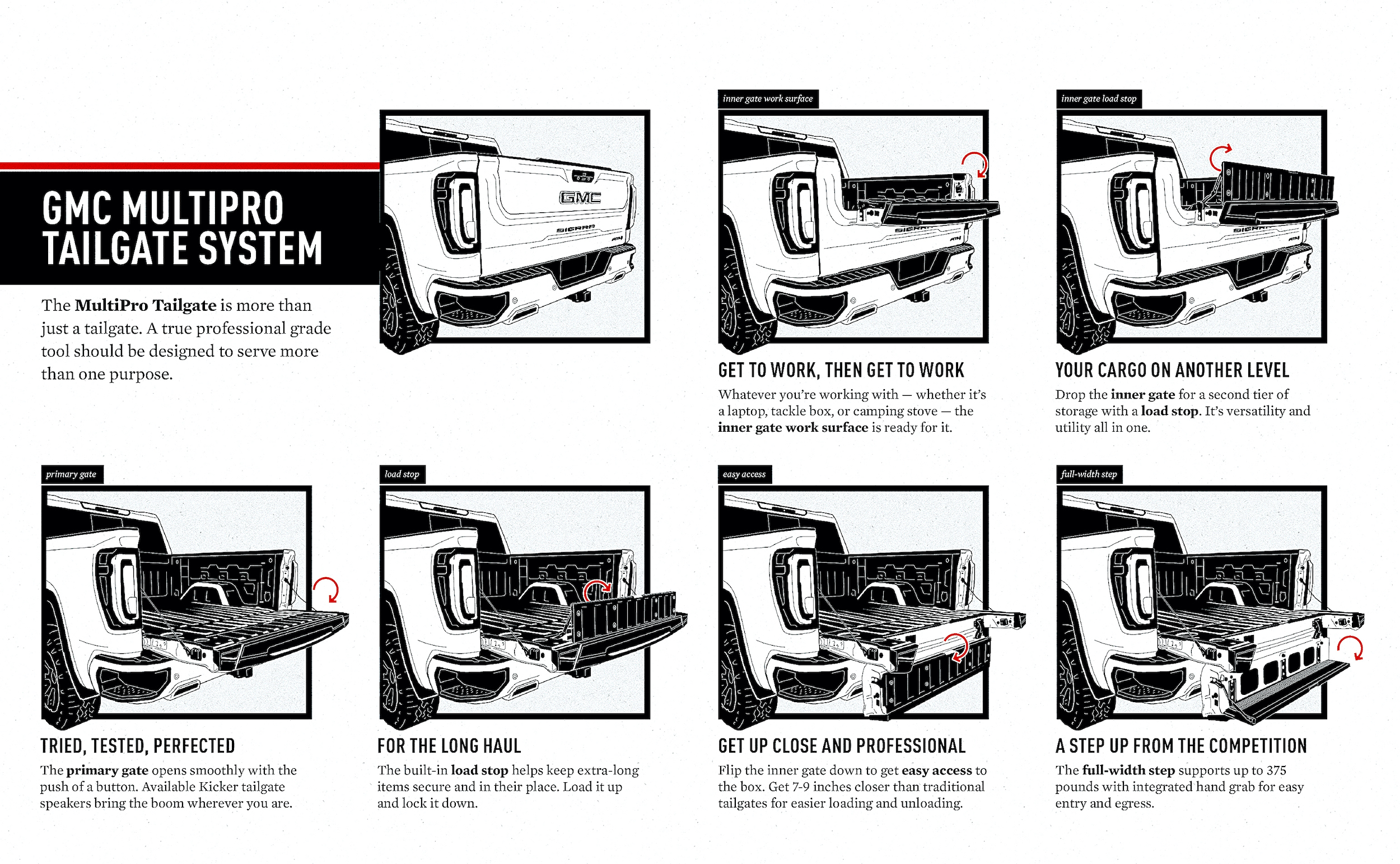 When the tailgate concept reached the GM truck team, they were intrigued and suggested a few changes that would be needed if it was to go into production.  For example, having the gate split in half prevented the end gate cables from being able to hold loads on the gate, a must for any production truck in terms of usability.

Al and Jim and I then were all invited to an innovation clinic for the current generation Sierra 1500.  These internal clinics are almost like Shark Tank. We showed the concept again and were tasked with building a customer clinic model that met engineering technical requirements. If the customers in this clinic loved the idea, it would be on the new Sierra.

The response was clear: The customers loved the clinic tailgate. The team learned ways they might use it, and even ways to improve it. For instance, we confirmed that customers would want an assist handle to go with the tailgate.

From the beginning, we set the goal of the tailgate: First and foremost, it needed to be a functioning end gate, and secondly, it would serve as a step. These goals allowed us to focus on making those features great and then develop the other multi-functional uses.

DN: How did you then engineer these ideas into an actual working tailgate?

Derek Patterson: First it should be said that a very talented team of engineers designed and built the MultiPro gate. From production engineering, to design, studio, the test labs, to the manufacturing and safety teams.  We had senior leadership’s support, and a great marketing team to get us to production.

Before even looking at the gate design and construction, we had to determine how the customer would use it, and the loads it would have to carry. This gate had to be as strong as any gate we’d ever built.  We wouldn’t compromise on any loads.

Safety is our overriding priority at GM, and the MultiPro gate was no different. We spent months working out how the gate would function and the design steps needed to ensure that the gate was safe when used.

Once we’d established load cases, and safety protocol, we began designing the gate. There were not many off-the-shelf examples to look from, so we looked outside for inspiration. For example, a trip to an RV store gave us ideas on how outside companies execute steps and latches.

With the learnings from our clinic property and some ideas on how to make the new content, we began designing the gate system. We decided that our first design cycle would be for the new Sierra’s Mule builds, which traditionally focus on powertrain and chassis content. We pitched the business case for including the tailgate to the Chief Engineer and were approved. The mule design then ran through a series of analytical and physical testing procedures. 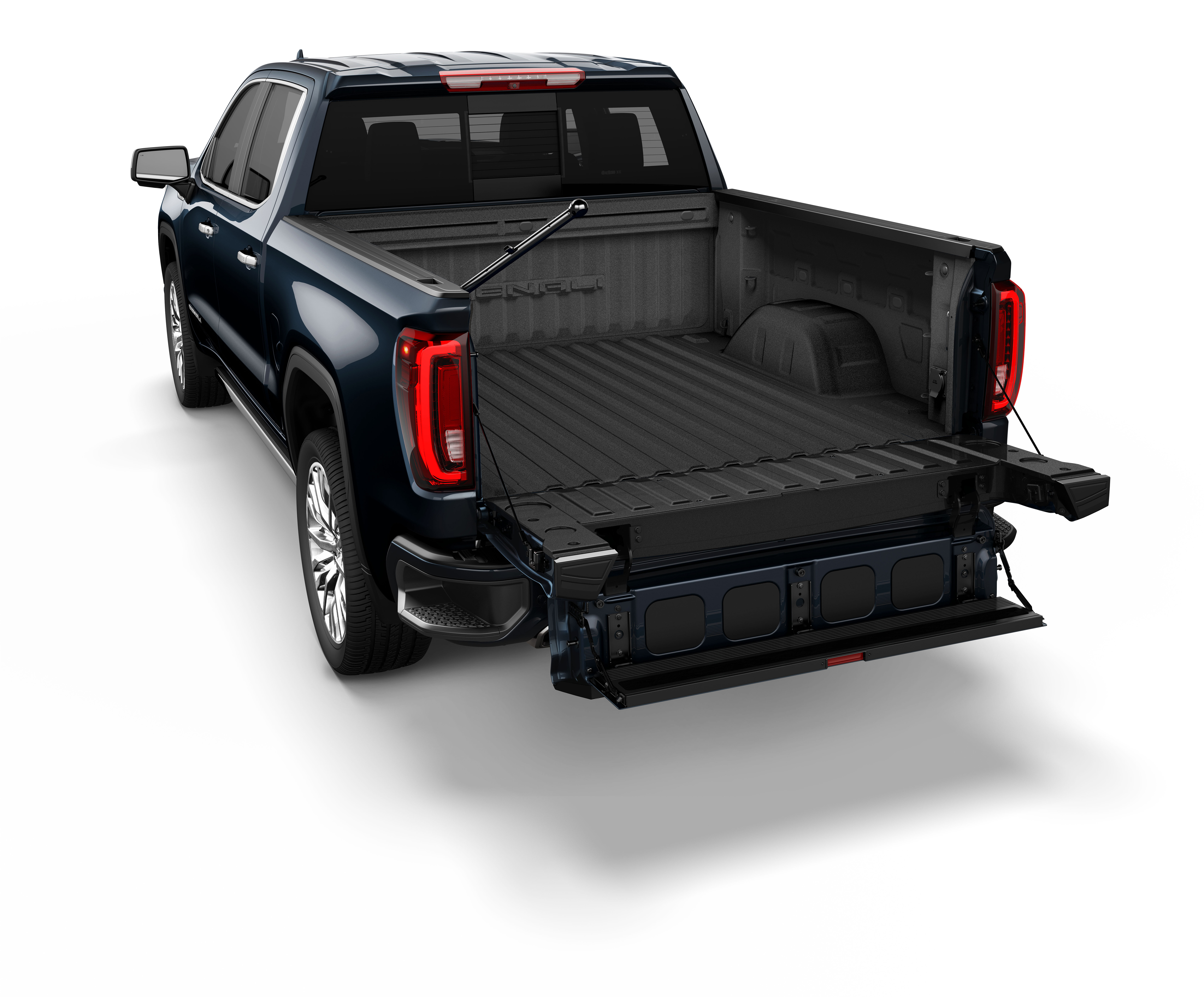 The GMC Sierra with its MultiPro tailgate in its full-width step configuration.

DN: What did you learn from testing prototypes with real people and what changes did you make?

Derek Patterson: One of the first decisions we made was on the metal the gate would be built from. Due to weight concerns, we chose aluminum. This allowed us to give the customer a gate that could be lifted easily, and not affect the overall contribution to the truck's weight.

From the mule testing, we were able to correlate the analytical model with the physical testing. This allowed us to design a high-fidelity model.  These learnings led to the production design on the road today.

Clinic feedback from real customers also confirmed our need for an assist handle. Our ergonomic experts suggested a location that assisted in entering and exiting the truck. We put the handle in that spot. 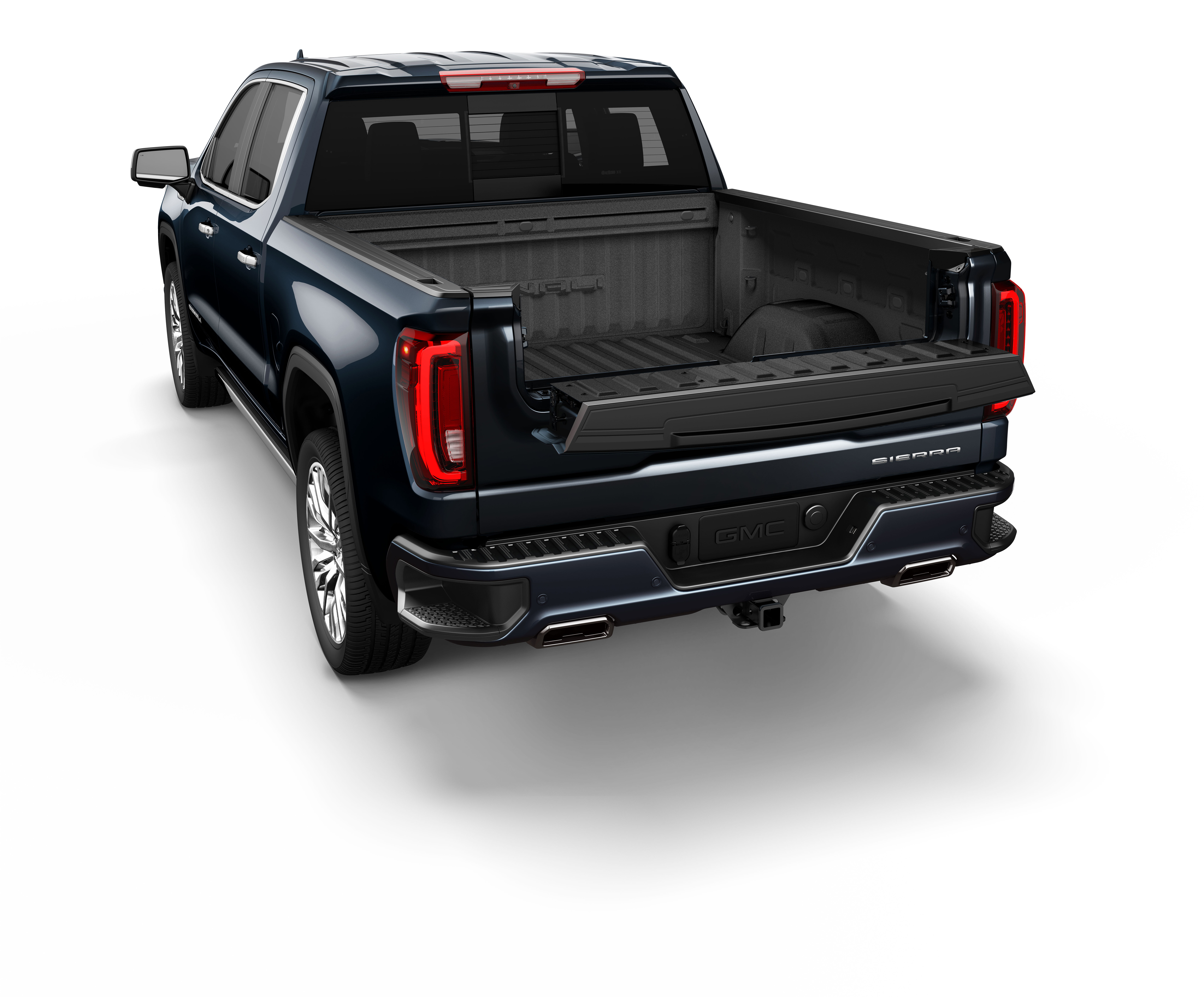 In this configuration, the GMC Sierra's MultiPro provides a raised work surface to prevent needing to hunch over a project on the tailgate.

DN: What did the production engineers say? How hard was this for the factory to build?

Derek Patterson: We worked closely with our production engineers to ensure the MultiPro gate met GM’s requirements for quality and manufacturing. Ultimately the success of the gate speaks for itself.

DN: What is the customer reaction?

Derek Patterson: One of the greatest pleasures for us was keeping the MultiPro a secret. The first time anyone outside the company ever saw it was at the reveal. In addition to the positive feedback we received during our customer clinics, the MultiPro tailgate has been popular with owners, as well.

They love the ease-of-use and its multiple functions, but one of the things we hear most often is how much they use and appreciate the step to access the truck bed more easily. Since this was one of our two key goals, it’s very satisfying to hear. 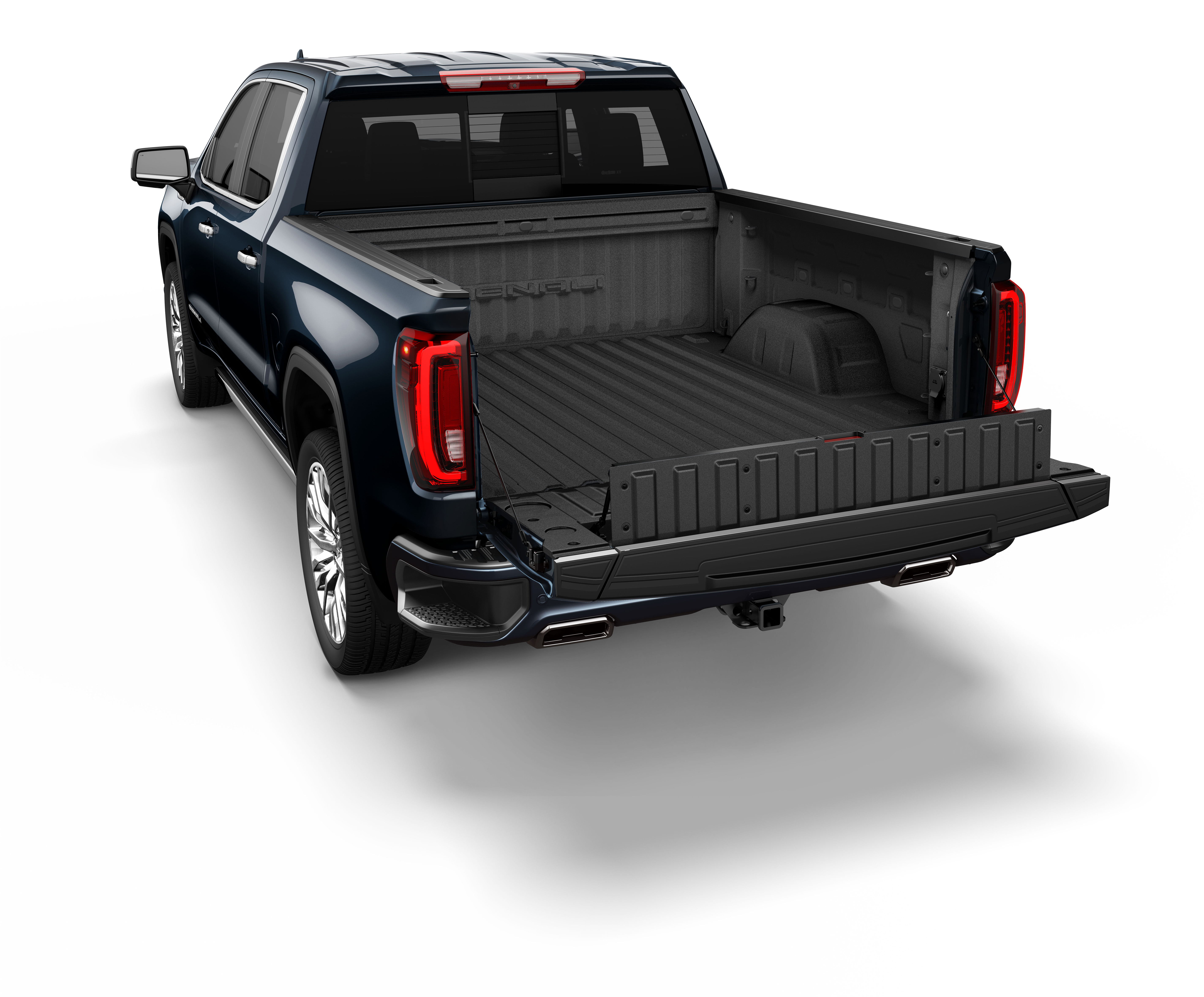 The prevalence of crew cab trucks means shorter beds. This "load stop" configuration lets drivers load longer materials in the bed but still have a raised stop to prevent them from sliding out.

DN: What’s next? Do you think you might yet be able to add some of the ideas that didn’t make it this time?

Derek Patterson: We are always looking to improve popular features. Since MultiPro launched on the 2019 Sierra 1500, it has been added to the Sierra HD and will be added to the GMC Hummer EV.  We also have expanded the availability of the tailgate on the 2021 Sierra 1500, making it standard on SLE and Elevation and available on the base Sierra. It was already standard at the SLT, AT4 and Denali trim levels, so it is nice to make it more widely available. 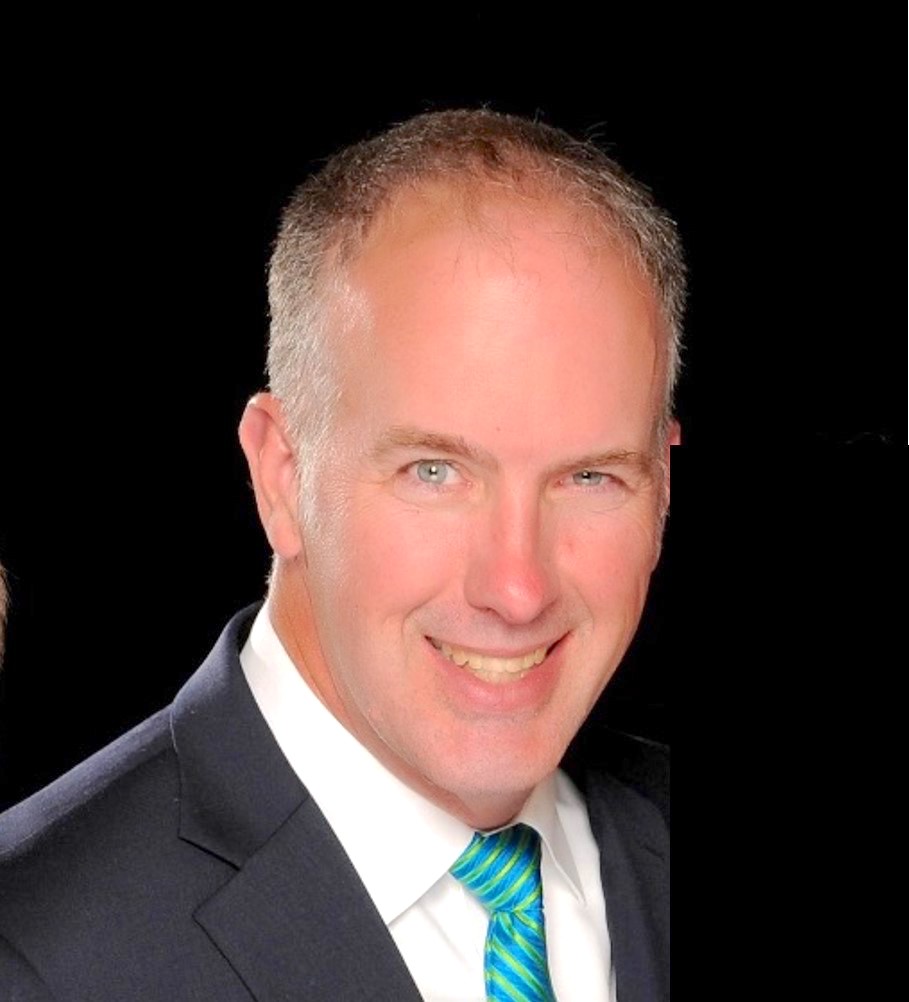