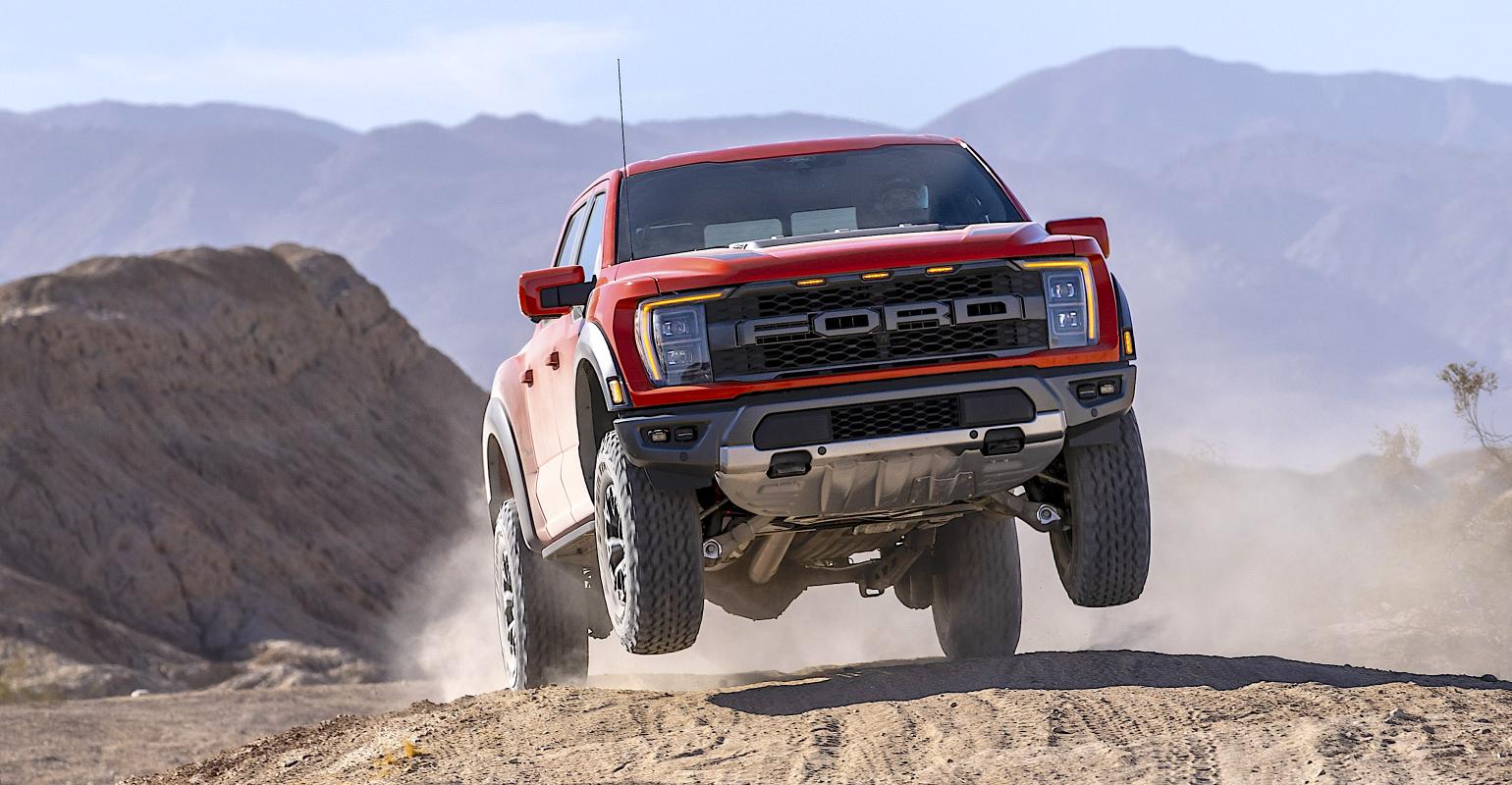 Ford established the factory desert racer pickup category when it launched the F-150 Raptor in 2009 and the company is upping its game in that segment with the introduction of the third-generation Raptor based on the latest F-150 foundation.

Ford defied expectations, at least for now, by sticking with the EcoBoost twin-turbocharged 3.5-liter V6 for power after the company introduced a big block 7.3-liter overhead valve V8 for the Super Duty pickups. It turns out that V8 fans will have to wait until 2022 for a V8-powered Raptor R.

For now, the EcoBoost V6’s output will be similar to that of the 450-horsepower, 510 lb.-ft. of the 2020 Raptor, according to a spokesman. The engine is unchanged for 2021, but Ford hasn’t completed the final certification with the new intake and exhaust systems for the 2021 model.

The exhaust system is important because criticism of the previous V6-only Raptor was the flat sound of its exhaust note, which was not as exciting as the voice of the original V8 Raptor. For 2021, Raptor features a 3.0-inch diameter exhaust system with an X-pipe connecting the sides of the dual exhaust. Active valves in the exhaust system let the driver select among four sound modes; Quiet, Normal, Sport, and Baja. Ford engineers pledge that the result is a more pleasing sound that should satisfy the critics.

The engine is backed by a 10-speed automatic transmission matched to a standard electronic locking rear differential and optional Torsen limited-slip front differential. Both axles feature a 4.10:1 ratio.

Off-road performance was already exemplary in the previous Raptor, so engineers were left to make incremental improvements where possible. A new five-link rear suspension system replaces the previous truck’s archaic leaf springs with coil springs for improved control of the axle that lets the new Raptor put power to the ground more effectively.

To provide the long suspension travel needed for absorbing big bumps and landing the truck from jumps, the Raptor employs 24-inch coil springs in the rear suspension, which the company says are the longest springs in the industry. It also includes extra-long trailing arms to maintain better axle position over rough terrain. And the EcoBoost engine management system has been recalibrated to exploit the improved traction of the five-link setup, delivering more torque off the line for faster starts.

“Raptor is rooted in Baja 1000 racing, and its suspension advances our capability and performance – a five-link rear setup with more wheel travel than any Raptor before it,” said Carl Widmann, Ford Performance chief engineer. “And like a trophy truck, every aspect of Raptor has been engineered to deliver precision capability when your foot is flat on the floor, way out in the middle of nowhere roaring across the desert.”

Another big deal, literally, is the new Raptor’s available 37-inch BF Goodrich All-Terrain T/A KO2 tires, which are the largest tires available from the factory on any pickup truck. These monster tires provide 13.1 inches of ground clearance, a 33.1-degree approach angle, a 24.9-degree departure angle, and a 24.4-degree breakover angle. "This is no small accomplishment," stated Widmann. "Thirty-seven-inch tires are big, and they get into the clearance of many parts," which makes engineering the truck to accommodate them a challenge, he said.

As with the other 2021 F-150 models, the Raptor offers built-in 120-volt AC electric power. The Raptor’s Pro Power Onboard system is a 2.0-kilowatt system that delivers power to outlets in the bed for running power tools, camp lights, and other equipment.

Off-roading is an outdoor activity that is steeped in tradition, but the Raptor aims to stay contemporary with a raft of digital upgrades. The truck accepts over-the-air updates to its navigation system, for example, so customers could potentially receive updated trail maps in the future. The truck’s FordPass mobile app lets drivers remotely check the truck’s fuel level or tire pressures. Both of those are critical matters when off-roading.

Piloting the Raptor through the outback is simplified by the new truck’s Trail 1-Pedal Drive system. This works in practice much like an electric vehicle’s one-pedal high-regeneration driving mode, when lifting off the accelerator pedal causes the vehicle to decelerate with the force of a light brake application. This lets owners drive through stop-and-go conditions without switching between the accelerator and brake pedals.

On the trail, drivers often need to left-foot brake to control the vehicle as it crawls down the backside of rocks to prevent it from crashing down to the ground. Ford’s Trail 1-Pedal Drive provides that same function using only the accelerator pedal, as the Raptor automatically applies brake force when the driver lifts off the pedal.

There’s also an off-road cruise control system that lets drivers set a low speed so they can focus on steering the truck through challenging conditions.

The 2021 Raptor is slated to be available by this summer. The 2022 Raptor R arrives next year.