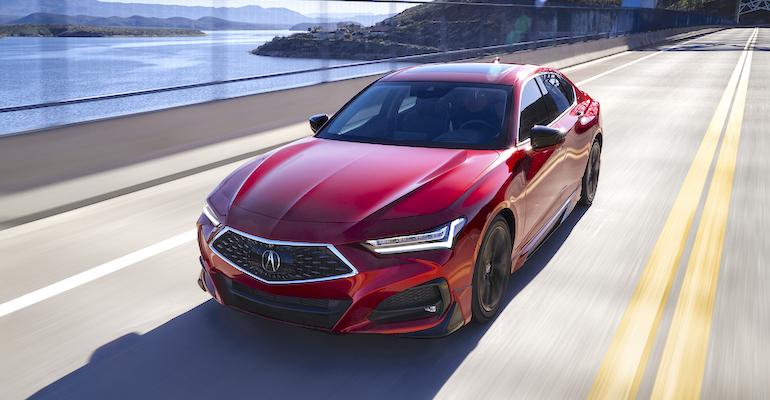 2021 Acura TLX
Acura TLX is better, stronger, and faster thanks to advanced manufacturing that produces a superior product.

The Honda Motor Co. is justifiably renowned for the engineering excellence of, well, its motors. But with the new 2021 Acura TLX sport sedan, the company should earn accolades for the design and manufacturing techniques of the car’s chassis.

Until now, Acura’s mid-size sedans have been derived from the Honda Accord. The 2021 TLX is built using 95 percent unique components, reports associate chief engineer Ken Sheridan. The car has been designed with an emphasis on the upcoming Type S V6-powered high-performance variant, which was judged to demand specifications beyond anything possible from the Accord chassis, he said.

The most obvious change is the use of double-wishbone suspension in place of the economy-car McPherson struts employed by the Accord. Wishbones yield more precise handling, increased cornering grip, and greater mechanical compliance for improved ride quality. That suspension incorporates an available driver-selectable adaptive damper system that tailors the ride and handling characteristics to the situation.

TLX also features variable-ratio steering. It has borrowed electro-servo brake-by-wire technology from Acura’s flagship sports car, the NSX. In that application, the simulated brake response is very convincing, and the car does not suffer from poor low-speed modulation for smooth stops, as afflicted earlier such systems from other manufacturers.

Related: How to Build a Better Bilstein Shock Absorber

The crucial part of a successful chassis is the body structure that mounts the suspension. As the “undamped spring” connecting the four corners of the car’s suspension, the aim is to make the body structure as rigid as possible so that the springs and adaptive dampers can work as they were designed to do.

In the case of the TLX, that body structure marks a tremendous improvement. Its overall torsional stiffness is increased by 50 percent compared to the outgoing model. In the local areas where the suspension attaches, the 2021 TLX is twice as stiff as before. 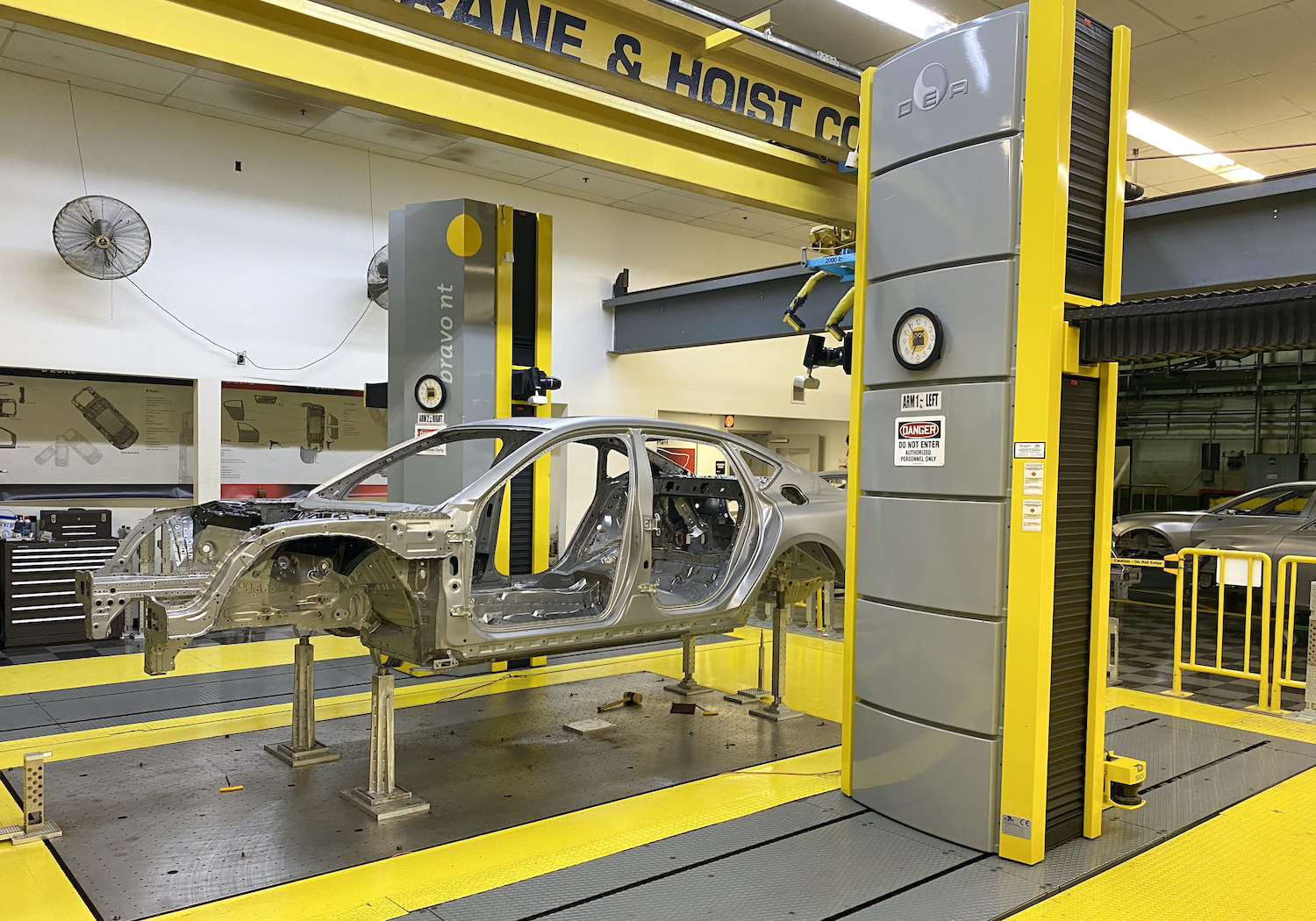 A 2021 Acura TLX body is measured using a coordinate measurement machine at the Marysville Auto Plant as part of the HAB (High Accuracy Body) process.

This was accomplished by the use of an ultra-rigid new center tunnel that serves as the TLX’s backbone. This is backed up by triangulated front shock tower bars, front and rear underfloor braces, a one-piece rear bulkhead stiffener, and new cast-aluminum front shock tower mounts. Additionally, the TLX has ultra-high-strength-steel one-piece door rings and an ultra-stiff center tunnel that lend rigidity while directing impact forces around the cabin in case of a crash.

One thing that is borrowed from the Accord is a laser brazing manufacturing technique for assembling the TLX’s roof panel to the side panel stampings. The car’s side panels are joined to the roof by a thin bead of steel weld, leaving a perfect seam that can be painted, rather than having to hide the seam behind a plastic cover as is normally done.

The resulting joint is stronger too, boosting rigidity while reducing weight. The joint’s added strength lets the factory eliminate reinforcing gussets and brackets on the inside of the car that had to brace this crucial joint previously, according to Sheridan. “The laser braze is so strong we don’t have to do that,” he said. “The system itself is a dual-head laser. The first laser cleans the joint and the second one lays down a 1.6 mm wire line of copper-zinc-manganese.” 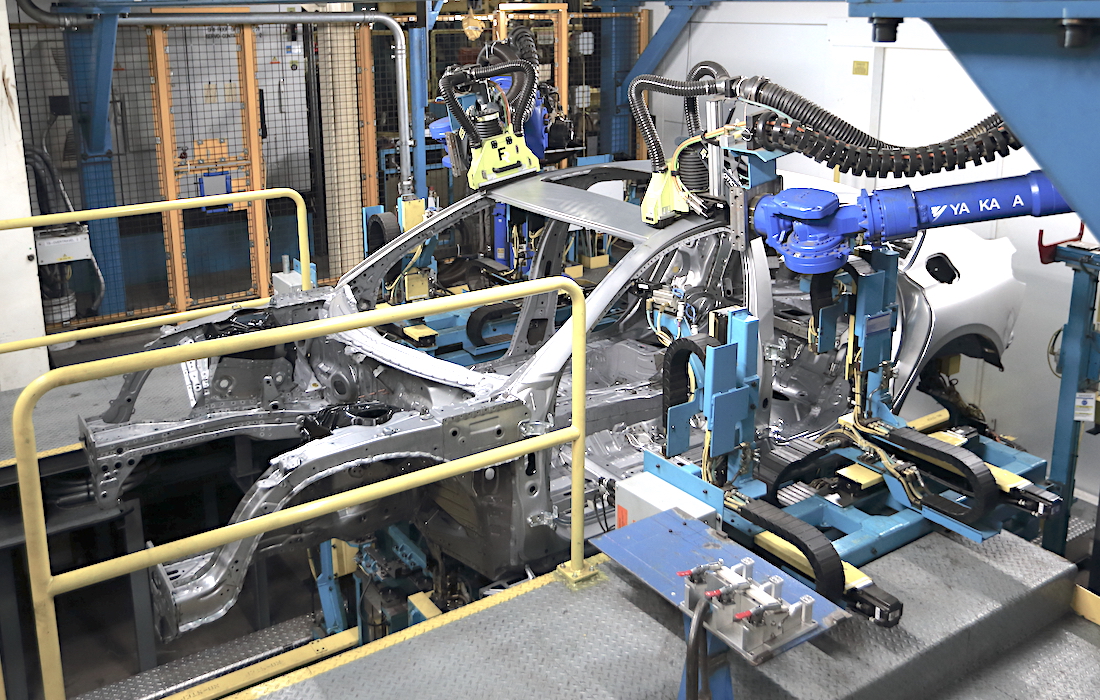 The 2021 Acura TLX finishes the laser braze process at the Marysville Auto Plant.

The robot uses geometric location for targeting fit and part accuracy of .25mm between the roof and side panels. The geometric location system is more accurate than the vision-based systems used by competitors to locate the fit of parts, Acura said.

The laser robot takes 44 seconds to perform each weld, which Sheridan indicates is a fast process, so it is efficient to do in the factory. “We will definitely expand that to other models,” he said

The car features 56 percent advanced lightweight materials such as aluminum or high-strength steel in place of conventional mild steel, which is a higher mix than on any previous Acura sedan. This includes typical easy bolt-on applications such as doors and the hood, but it also means the front shock towers, which are die-cast aluminum units that attach to the steel unibody with self-piercing rivets and adhesive. 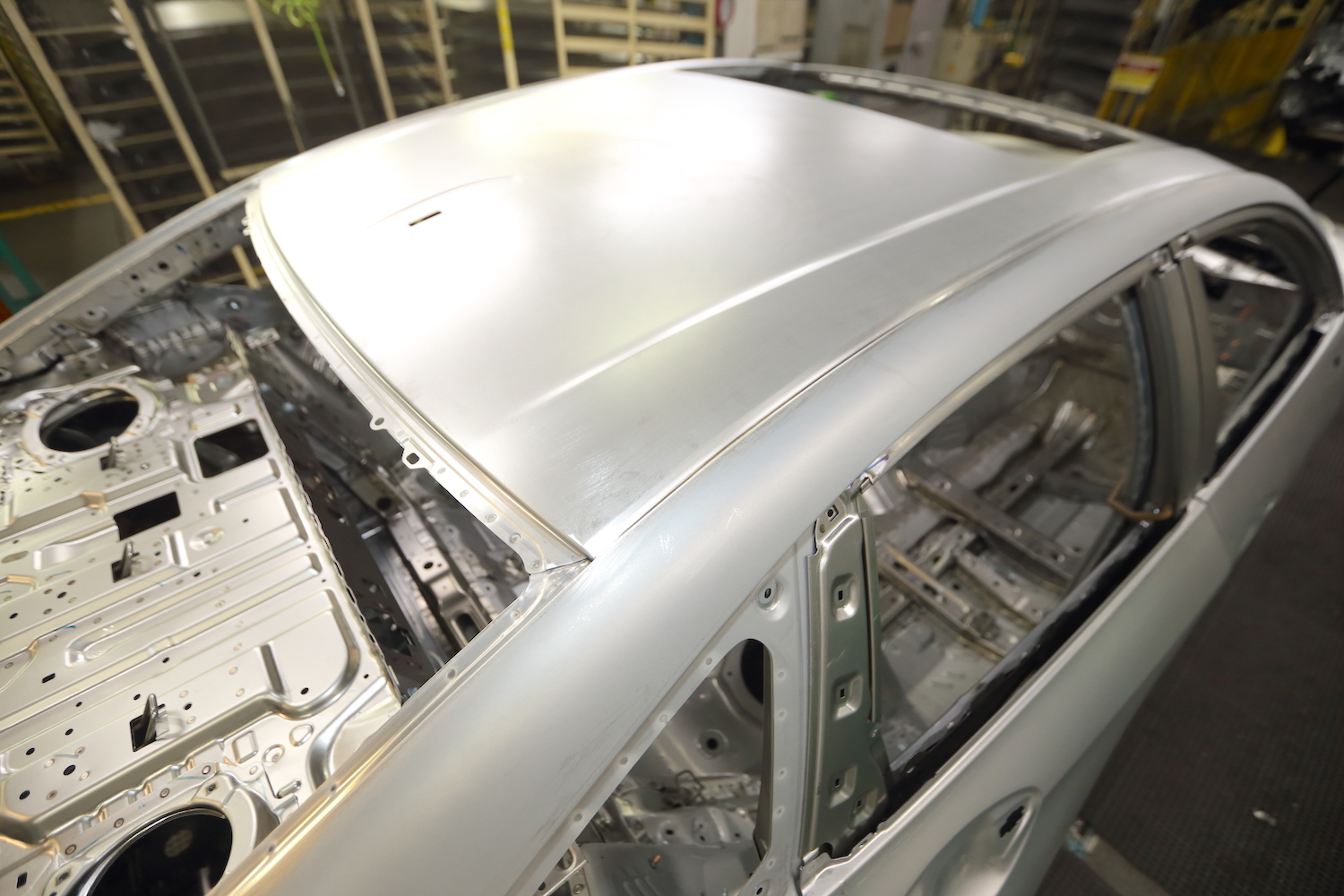 The 2021 Acura TLX is the first Acura model to feature a Laser brazed roof.

Sheridan points to the widespread use of this high-performance adhesive as contributing to the TLX’s rigidity and quietness. “On this car, we have additional spot welds in certain areas of the car where we want the platform to be very rigid,” he said. The adhesive works in conjunction with those additional welds to reinforce the chassis. “From a dynamic standpoint you don’t have as much twist,” Sheridan noted.

The aluminum body panels incorporate crisp styling lines that are stamped with sharp creases that have a 2.5 mm radius compared to a regular aluminum crease radius of 5 mm. 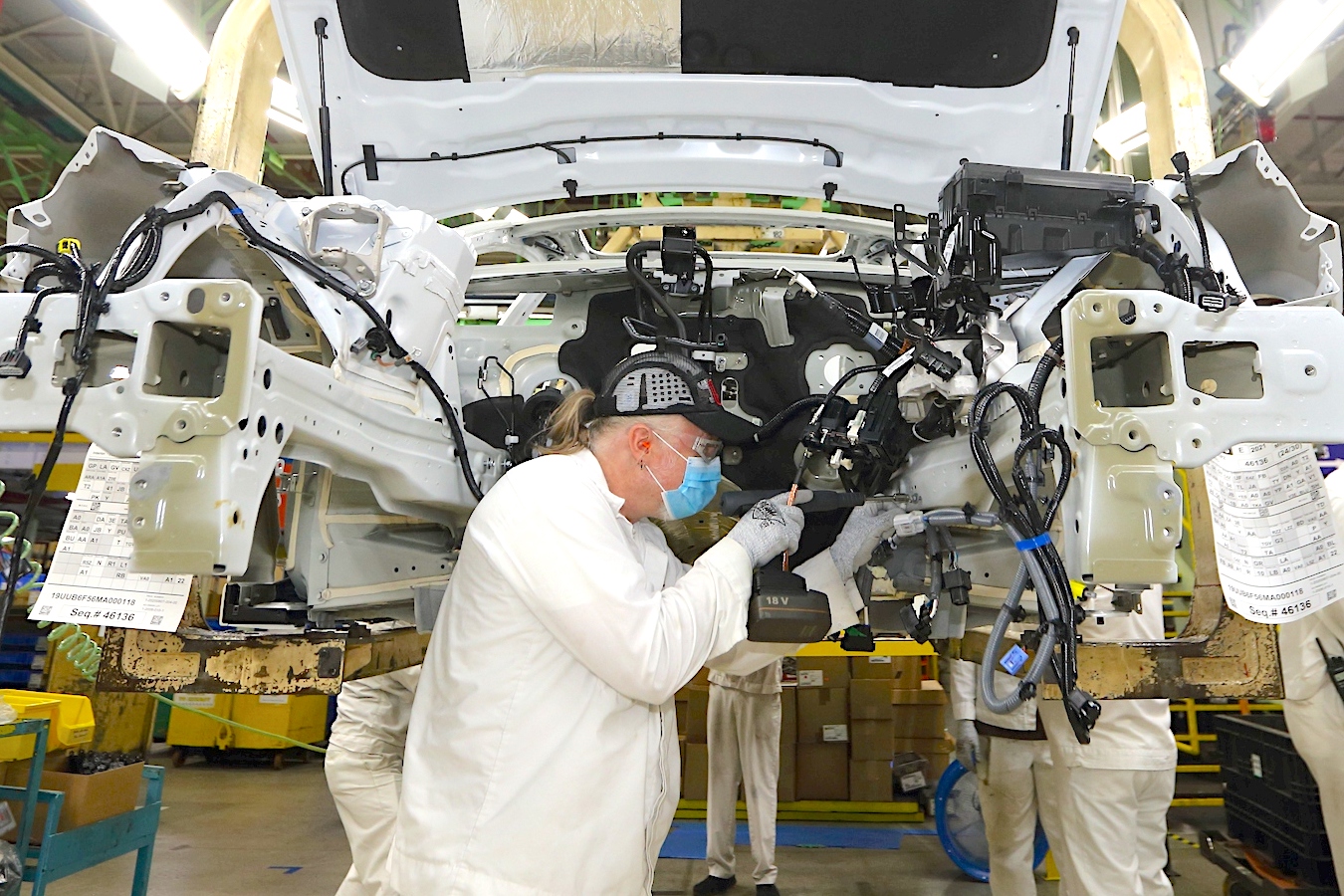 With the front bulkhead removed, assembly line workers have easier access to the TLX's engine bay.

An advance in assembling the TLX also provides an improvement in precision, boosting the car’s appearance. Normally, the factory will assembly the body-in-white and paint it. Then they have to remove the front bulkhead for installation of the drivetrain. When that bulkhead is bolted back on, the expectation was that the parts would align correctly.

For the TLX, there’s no such expectation. Instead, a young engineer named Jordan Page innovated the idea of a fixture to locate that bulkhead precisely where it should be. Acura calls this the Center Up Beam, and they use it to reinstall four key parts at the TLX’s front end to achieve better alignment for proper gaps and flush-fitting parts.

The CUB fixture is aligned using marks the factory put on the car’s cast aluminum shock towers, said Sheridan. “We have to reattach the parts really accurately,” he said. “The hood has styling lines that match lines in the bumper.” There is similar innovation inside the TLX’s cabin, where Acura is using robots in place of jigs to locate parts as they are attached. “From a cabin standpoint we took on a technology called ‘inner frame,’” Sheridan explained. “We are getting away from weld jigs with our general welding machine and now we hold the parts with robots.”

Those parts are located precisely using a common datum location provided by the parts’ suppliers. In doing so, the parts are located even more accurately by the robots than by the jigs. And from a manufacturer’s perspective, the multi-use robots are preferable to jigs which can only be used for one specific model.

All of this results in a car that is built with unprecedented accuracy and precision, which should be visible to customers. “We definitely put a lot of focus on the final customer image of what the car looks like,” noted Sheridan. 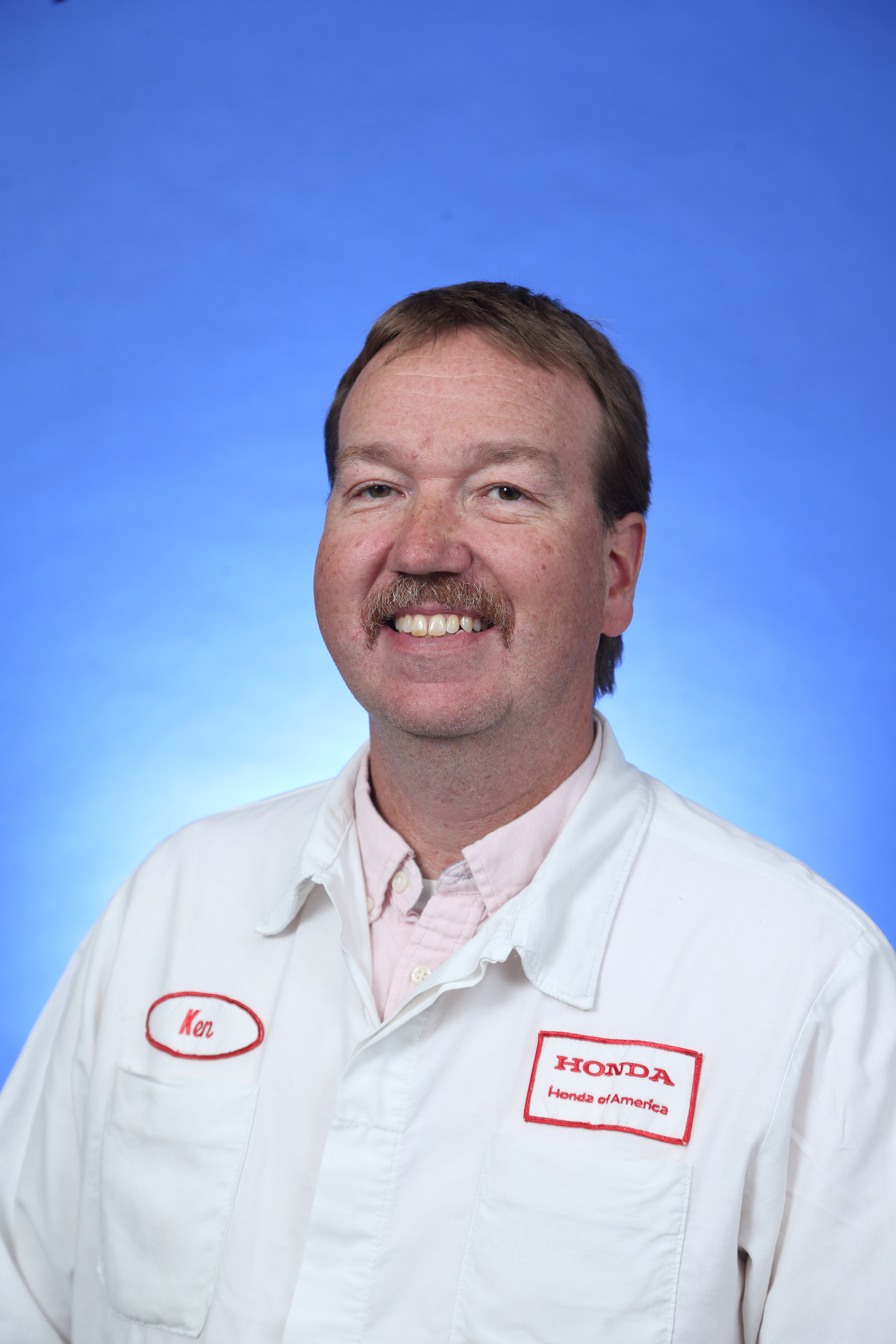