Trust a Knife-Wielding Robot? Your Attitude May Change After Seeing This 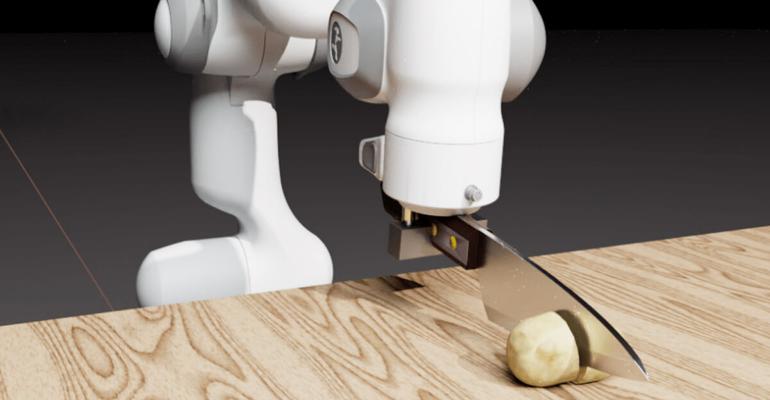 A robot simulator developed by USC and NVIDIA researchers can lead to machines that can accurately slice fruit, vegetables, or even human tissue.

The idea of a robot wielding a knife might not be such a savory one. However, scientists have recently developed a simulator to help these machines hone their cutting skills to more accurately slice through not only various foods but also human tissue.

A student researcher from the University of Southern California’s (USC’s) Department of Computer Science teamed with NVIDIA to develop the simulator, called DiSECt. The system makes strides in solving a longstanding issue in robotic development and has implications for the invention of both novel machines and existing surgical robots, researchers said.

Researchers said that scientists typically have struggled with developing intelligent robots that can replicate cutting due to the unpredictability of both the action and the objects that need to be sliced. Indeed, existing robotic systems tend to be oriented toward repetitive motion rather than scenarios that involve variation, although sensing technology has improved to enable the latter.

As one approach to this longstanding cutting issue, the team—led by Eric Heiden, a Ph.D. in computer science student at USC--introduced springs between the two halves of the object being cut, represented by a mesh, that weaken over time in proportion to the force exerted by the knife on the mesh.

“With our approach, we can automatically tune our simulator to match different types of material,” he said in a press statement. Heiden also is a lead author of a paper presented on the work at the Robotics: Science and Systems (RSS) Conference 2021 in July, where it received the Best Student Paper Award.

“The simulator augments the finite element method (FEM) with a continuous contact model based on signed distance fields (SDF), as well as a continuous damage model that inserts springs on opposite sides of the cutting plane and allows them to weaken until zero stiffness to model crack formation,” according to the paper, the co-authors of which are Miles Macklin, Yashraj S. Narang, Dieter Fox, Animesh Garg, and Fabio Ramos of NVIDIA.

Researchers conducted various experiments to evaluate the simulator’s performance that they outlined in the paper. First, they demonstrated that it could be calibrated to match resultant forces and deformation fields from a state-of-the-art commercial solver and real-world cutting datasets, with generality across cutting velocities and object instances.

In one of these experiments, they used a dataset of force profiles from a physical robot to produce “highly accurate predictions” of how the knife would move in real-life scenarios, Heiden said.

In addition to applications in the food processing industry, where robots could take over dangerous tasks like repetitive cutting, the simulator could improve force haptic feedback accuracy in surgical robots, helping guide surgeons and prevent injury.

“Here, it is important to have an accurate model of the cutting process and to be able to realistically reproduce the forces acting on the cutting tool as different kinds of tissue are being cut,” Heiden said in a press statement.

The team also illustrated that control parameters in the simulation could be optimized to minimize cutting forces via lateral slicing motions, they wrote in the paper.

The simulator is a step toward helping roboticists close “this reality gap” because it can automatically tune simulation parameters from real-world measures, Heiden said.

This gap is a “significant challenge” that must be solved if robots reach their potential for application to work for and alongside humans, he acknowledged. “Without this, robots may never break out of simulation into the real world,” he said in a press statement.