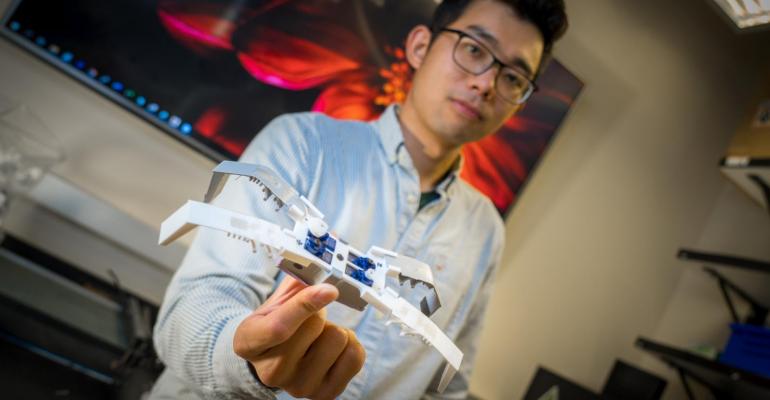 Developing soft robots is of great interest to scientists because they can be useful for many tasks that rigid robots or humans find challenging to perform. These include surgeries, working alongside humans in factory settings, and navigating disaster or war zones.

Now engineers at the University of California San Diego have used 3D printing to create soft and flexible robots called “flexoskeletons” that they said can be applied to make it easy for anyone to fabricate soft robots.

A team led by Nick Gravish, a mechanical engineering professor at the Jacobs School of Engineering at UC San Diego, reimagined how to create soft robots to engineer the new design from the inside out, he said.

Instead of adding soft components to a rigid infrastructure, Gravish’s team used inspiration from insect exoskeletons--which have both soft and rigid parts—allowing them to construct soft components for robots in a relatively short time and for a much lower cost than current fabrication strategies, he said.

“We hope that these flexoskeletons will lead to the creation of a new class of soft, bioinspired robots,” Gravish said in a press statement.

From the Inside Out

To create the robots, Gravish’s team used rigid material printed on a thin sheet of flexible polycarbonate to act as a base for the soft robots, he said. They added rigid features to this base in specific areas depending on the movement and support needs of the robot.

Researchers then used a 3D-printing process to create one flexoskeleton without any need for building or placing parts by hand.

Gravish was inspired to create a simple, affordable process for fabricating robots from a paper published by iRobot cofounder Rodney Brooks, then at the MIT Artificial Intelligence Lab, he said. Co-authored with Anita Flynn, the paper--“Fast, cheap and out of control: a robot invasion of the solar system”—envisioned the mass production of simple, autonomous robots for space missions.

Gravish aims to take this idea and apply it to the robotics field in general, not just for space exploration, he said. “We want to make soft robots easier to build for researchers all over the world,” Gravish said in a press statement.

The method developed by the UCSD team shows how it might be possible. Researchers were able to print one flexoskeleton component in 10 minutes for the cost of less than $1 using commercially available 3D printers. Moreover, an entire robot takes less than two hours to print.

Researchers published a paper on their work in the journal Soft Robotics.

Ultimately, the team wants to create an assembly line that can be used to print entire flexoskeleton robots automatically that, in swarm form, could do the same or more work than one large robotic device, Gravish said.