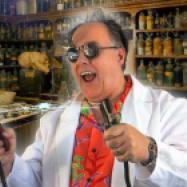 Controlling WS2812 Tricolor LEDs (aka NeoPixels), Part 3
Jul 08, 2022
A look at pulse-width modulation and how it controls the brightness and color of LEDs.

Controlling WS2812 Tricolor LEDs (aka NeoPixels), Part 2
Jun 28, 2022
Turning a LED on is easy. Preventing it from blowing itself up is a little harder.

Controlling WS2812 Tricolor LEDs (aka NeoPixels), Part 1
Jun 20, 2022
I have a simple rule of thumb that there is no such thing as having too many LEDs.

Will I See You at the Virtual 2022 RT-Thread IoT OS Global Tech Conference?
May 27, 2022
An exceptional group of speakers will be presenting on a wide range of topics at this free-to-attend three-day extravaganza, which will take place June 1-3, 2022.

Reincarnated Return of the HRRG 4-Bit Computer (Part 3)
May 20, 2022
As part of the HRRG’s evolution over the past few years, the instruction set has experienced some interesting changes.

Reincarnated Return of the HRRG 4-Bit Computer (Part 2)
May 07, 2022
The HRRG’s design has evolved over the years, cumulating in a new collection of CPU registers (both physical and virtual).

Reincarnated Return of the HRRG 4-Bit Computer (Part 1)
May 03, 2022
I have some awesome news for anyone who has been following my HRRG Computer project over the years… we’re back at work with an FPGA implementation on the horizon!

Creating an Animatronic Robot Head (Part 2)
Feb 17, 2022
How many ways do you think there are to equip your robot’s eyes with pan-and-tilt functionality?
Load More