Home>Alternative Energy
Recent
NVIDIA Omniverse Brings BMW a 30 Percent Boost in Production Planning Efficiency
May 18, 2021
How Artificial Plants Are a Sunlight-Powered Hydrogen Fuel Cell Game Changer
May 17, 2021
Why is Clock Jitter a Big Deal as PCIe 5 Gen Moves Into the Modern Data Center?
May 17, 2021
Individually, These Robots Are Dumb. But When They Work Together? Awesome!
May 17, 2021
Want a Job? Here Are 21 Hot Engineering Gigs for 2021
May 17, 2021
This Breathtaking Bugatti Hypercar Reveals its 3D Printed Secrets
May 17, 2021
Curious Engineers Need to Understand Field-Based PCBs and L2+ ADAS Systems
May 17, 2021
Big Oil Mines Carbon Capture Technology to Mitigate CO2 Contribution
May 16, 2021

A Dutch inventor is working on ways to help solve some of the world’s environmental problems by creating clean drinking water from the air using solar energy.

Ap Verheggen was inspired by years traveling through the Arctic, where he witnessed how climate change is affecting local communities, to start thinking about how to create water in places where it is scarce or disappearing due to changing environmental situations. This inspired the project SunGlacier, which successfully created a series of sculptures to think about ways to solve these problems -- including an artficial glacier in the middle of the desert.

“I travelled for many years through the Arctic and was a witness of the climate change that caused many problems for local communities,” Verheggen told Design News. “Climate change had a huge impact on local culture. One of the most well-known impacts on nature are the rapidly melting glaciers. I thought by myself: Are we able to build new glaciers on our planet, using current technology? If I could prove that, I would have the confidence to believe in solutions for the future.”

Following the success of the SunGlacier creative project, Verheggen set about on something less conceptual and more practical. Under the company name SunGlacier, he and his team invented WaterCube, a device designed with proprietary technology to create clean drinking water from air. 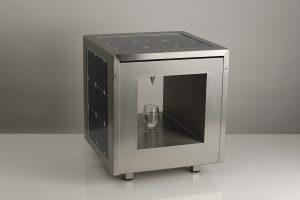 WaterCube, from the Dutch company SunGlacier, uses solar energy to create water out of air. Dutch inventor Ap Verheggen was inspired to develop the invention by witnessing climate change firsthand in the Artic.
(Source: SunGlacier)

WaterCube is a 20-inch cube of stainless steel with solar cells embedded within that power a refrigeration device. The device cools an inverted cone to create condensation, which then drips into a glass to provide water. Videos on the SunGlacier website show how the technology works.

“The sun is shining on the solar panels, and they generate electricity that is used to cool a surface,” Verheggen explained. “Water in the air bounces to it, and it starts to condensate. The water drops drip down and are collected in a container or glass.”

Verheggen said he and his team were surprised at how WaterCube worked, producing even more water than the team expected. They are now working on a next-generation of the device with a 10-liter capacity that is smaller and only needs a few solar panels for power.

Aside from providing drinking water -- which can be done after the resulting water is cleaned and enriched with minerals -- WaterCube also has applications for agriculture, Verheggen said.

“You stick the water makers in the ground and they produce water,” he said. “But the system also could be used as add-on systems for other efficient new methods to grow crops, like aquaponics -- a nearly closed circle of water to grow food. This principle still needs water, and cooling as well. Next to water, our exhaust produces cool air, so for both items it could turn into a solution.”

While WaterCube is not available as a commercial product yet -- the team plans to do more testing first -- Verheggen said he thinks this is the direction products are moving in in order to help solve some of the world’s water and other environmental issues.

“We are just before the turning point,” he said. “In terms of water there are only two options: it is extremely cheap or not available anymore, but this balance is changing quickly. In many parts of the world, the water buffers are getting empty, and the remaining water is becoming too toxic for human consumption ... We are confident our new ideas can work.”