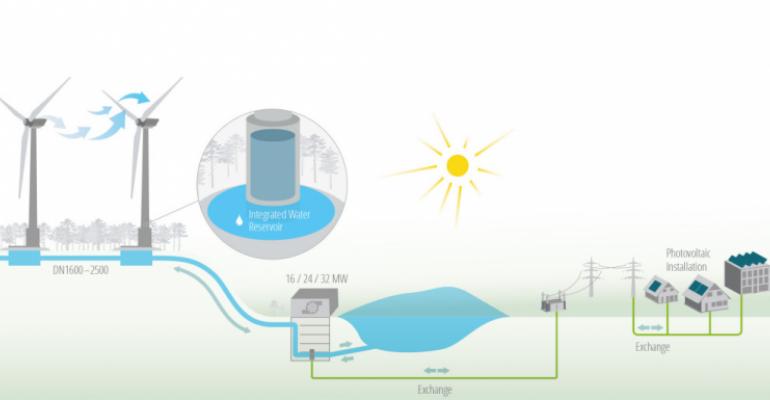 Max Boegl Wind and GE Renewable Energy are teaming up to develop an integrated wind- and hydro-power system that aims to provide power to the Germany electricity grid.

Germany has been a longtime proponent of wind energy. Now the country is becoming an alternative energy pioneer in another way as one of the first countries to deploy an integrated wind energy and hydropower system being developed by firm Max Boegl Wind AG and GE Renewable Energy.

The four-turbine system is comprised of unusually tall turbines -- at 584 feet high when the blade is pointing straight up -- with water reservoirs inside and underneath them. The bottom 131 feet at the base of the turbines will hold 1.6 million gallons of water, and the whole turbine will sit in another reservoir that holds an additional 9 million gallons, the companies said.

The system is not the first to leverage both wind and hydro power together; a wind/hydro system on El Hierro, one of Spain’s Canary Islands, also generates energy from both sources. However, the MaxBoegl-GE system is the first to integrate the mechanisms for both systems and use specialized technology in the form of the taller turbines to do so.

One unique aspect of the system, however, is that it must sit atop a hill to work, and there must be room in the valley below for a manmade lake to store the water when it’s not being used by the turbines, according to GE.

For these reasons, the companies had to find a suitable location in Germany to deploy the system, and settled on the Swabian-Franconian Forest in the western part of the country. Max Boegl Wind and GE Renewable Energy are currently building a hydroelectric plant there that has the potential to produce 16 megawatts of power, with the wind farm itself generating 13.6 megawatts.

The spot was also apropos for the construction of the system for another reason, said Cliff Harris, general manager for onshore wind in EMEA at GE Renewable Energy. “Germans in this area are known as tinkerers and inventors,” he said. “So the mentality of this technology really fits with the population.”

The companies expect that the four-turbine pilot project will be connected to the German power grid by the end of 2017, with the hydropower plant operational about a year later, according to GE.