Recent
Advances in Catheter Manufacturing
May 18, 2021
The 2021 State of Manufacturing Report: Swift Moves to a Digital Future
May 18, 2021
NVIDIA Omniverse Brings BMW a 30 Percent Boost in Production Planning Efficiency
May 18, 2021
How Artificial Plants Are a Sunlight-Powered Hydrogen Fuel Cell Game Changer
May 17, 2021
Why is Clock Jitter a Big Deal as PCIe 5 Gen Moves Into the Modern Data Center?
May 17, 2021
Individually, These Robots Are Dumb. But When They Work Together? Awesome!
May 17, 2021
Want a Job? Here Are 21 Hot Engineering Gigs for 2021
May 17, 2021
This Breathtaking Bugatti Hypercar Reveals its 3D Printed Secrets
May 17, 2021

Will Robots Put You Out of a Job, Or Give You a New One?

We've written about several reports looking at robots and automation in manufacturing and whether industrial robots create more jobs for people or take them away. It's a complex subject, and depends a lot on which data you look at. A new white paper by the Association for Advancing Automation (A3) says that increases in industrial robot shipments correlates positively with increases in US job growth based on Bureau of Labor statistics.

The A3 is the parent organization of the Robotics Industry Association (RIA), and describes itself in a press release as "the global advocate for the benefits of automating." So it's not surprising that they're interested in data that indicates a connection between job growth and the use of automation and industrial robots. For example, an International Federation of Robotics (IFR)-sponsored 2013 report we told you about concluded that industrial robotics created up to 80,000 jobs in the electronics sector. That was in six industrialized or industrializing countries, including the US, during the 2008 - 2011 recession. That in-depth study noted important differences in the effects of robotics on employment in newly industrializing versus already industrialized countries.

The A3 white paper, "Robotics Fuel the Next Wave of U.S. Productivity and Job Growth," compares data from the Bureau of Labor Statistics with robot shipment data and reports from a wide range of US manufacturing firms, concluding that the use of robots in manufacturing is associated with increased employment. Its authors say that, during the non-recessionary periods of 1996-2000, 2002-2007, and 2010-2014, both shipments of robots and general employment increased. You can download a copy on this page.

The white paper's introduction says, "Today's robotics offer US manufacturers improvements in efficiency that are driving up profits and employment. At the same time, changes in domestic workforces are opening up new opportunities for worker advancement, and rising overseas labor costs are positioning the next wave of productivity and job growth in the US. While not widely understood, the correlation between robotics implementation and employment growth is clear."

The study concludes that three trends are affecting how robotics is shaping US manufacturing: the increased use of automation for repetitive and dangerous tasks, the shift to a service economy, and the reshoring trend. "What we're showing is that there's compelling evidence to indicate jobs don't go away when you bring in robots," Jeff Burnstein, A3's president, told us.

So far, many of the jobs that robots have traditionally done for humans are too dull, dirty, or dangerous, the well-known three Ds (DDD) of robotics. In a slideshow last year, fellow Design News senior editor Rob Spiegel looked at all the ways industrial robots are taking over some of humans' jobs in the manufacturing plant. Tasks range from welding and cutting, to material handling and machine tending, to packaging and unpacking boxes, to typical pick-and-place operations. They also include sophisticated automotive assembly tasks and mechanical stress testing.

Of course, during the last five years or so there's been a renaissance of sorts in manufacturing coming back to the US. Design News has continued to cover the reshoring trend, including discussions of just how much of an impact it is, or is not, making. But as many experts agree, automation is a key factor in the revival of US manufacturing, whether it's large or small.

The A3 report recognizes the fact that manufacturing jobs are no longer the main career path sought by most of the skilled labor force. Yet many engineering students are interested in jobs in robotics, and having that technology in place can help companies stay competitive when seeking new talent. 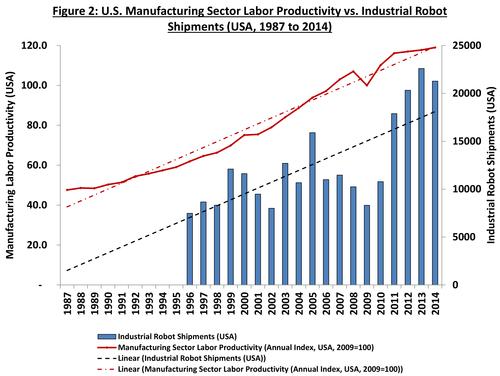 At the same time, increased automation has meant a greater demand for robotics engineers and technicians to build, service, and install industrial robots. This was also noted by the IRF study, which estimated that, by 2016, two to three jobs will be created directly by every industrial robot in use, and two to three more for indirect downstream jobs. Of course, that's based on the assumption that jobs displaced by robots in manufacturing will be replaced by jobs created downstream, or in new industries, as has happened historically. This IRF report updated numbers in an earlier, IRF-sponsored study on the same topic. You can download both at the bottom of this page.

Over the long term, the A3 believes that productivity increases and advances in technology have always created more jobs, said Burnstein. "A bigger-picture issue most studies don't address is what happens when companies can't stay competitive in the global economy, they go out of business, and those jobs go away," said Burnstein. "And what about the jobs saved? In many cases, if not for robots, they'd have zero jobs. Also, for companies that might have previously decided to offshore and didn't, staying onshore might accelerate due to automation and robotics."

By optimizing production, performing the "DDD" jobs, and increasing companies' global competitiveness, robots make it possible for those companies to create higher-skilled, better-paid, and safer jobs for people, said Burnstein. The white paper notes that demand to fill those jobs is now outstripping the available skilled workers. To close that skills gap, the robotics industry has an opportunity to impact future growth through new education initiatives, such as STEM programs to help raise needed technical talent, as discussed in a recent RIA article.