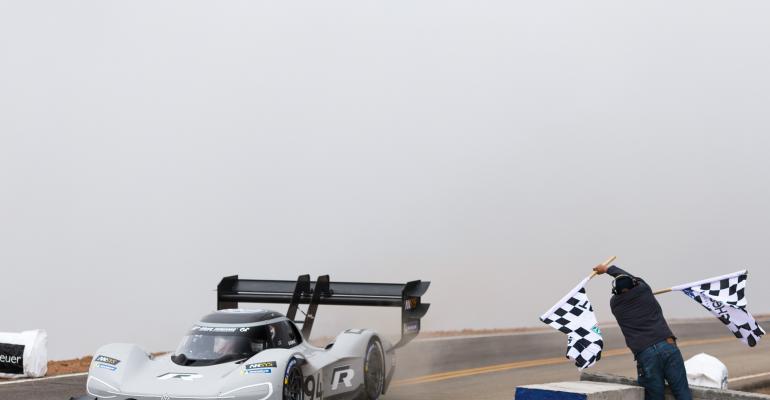 VW’s electric racer not only won the electric vehicle (EV) class; it smashed the outright record at the 100+ year old event.

Volkswagen’s I.D. R Pikes Peak electric race car, with French racer and previous Pikes Peak Champion Romain Dumas driving, has won the 96th running of the Pikes Peak International Hill Climb in Colorado. Engineered specifically to compete at the “Race to the Clouds,” the all-wheel drive, electrically powered racer completed the 12.4 mile uphill course in 7 minutes and 57.148 seconds. This obliterated the existing electric vehicle record of 8 minutes and 57.118 seconds. Dumas also beat the all-time record for the course—set by rally star Sébastien Loeb in a Peugeot in 2013—by more than 15 seconds.

The Pikes Peak Hill Climb course starts at 9,000 feet above sea level and winds through more than 156 turns before reaching the summit of the mountain at 14,115 feet. Normal, gasoline-powered race engines struggle to produce power in such thin air, while the power output of an EV is unaffected by the high altitude. With twin motors powering all four wheels and producing 674 horsepower (500 kilowatts), the VW racer had shown its potential earlier in the week by bettering Loeb’s qualifying mark on a portion of the course.

Although the skill and experience of the driver was an important factor in the result, the engineering and technology that Volkswagen Motorsport brought to bear on the challenge was impressive. Most EV teams that have competed at the hill climb have built cars with maximum horsepower (more than 1,000 horsepower) and very large battery packs, resulting in very heavy race cars. VW went a different direction, using computer simulations and modeling to help design and develop a lighter weight (less than 1,100 kilograms) solution with a smaller (45 kilowatt-hours) battery pack. It allowed Romain Dumas to claim his fourth victory at the event and beat the all-time record that had been held by Loeb’s gasoline-powered, factory-sponsored Peugeot.

On the morning of the race, fog, poor visibility, damp conditions, and even a bit of snow on the summit made a new record seem unlikely for the VW team. “For it to come off, everything had to come together perfectly—from the technology to the driver. And the weather had to play ball too,” said Dumas in a Volkswagen press release. The clouds parted long enough for Dumas to make a near-perfect run. “That everything ran so smoothly is an incredible feeling, and the new record on Pikes Peak is the icing on the cake,” he added.