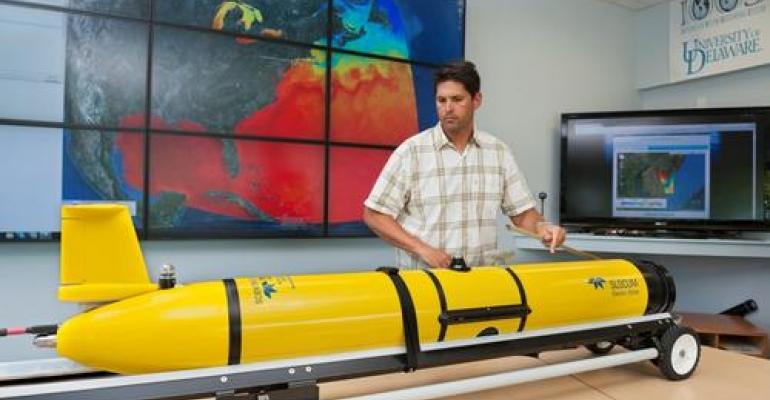 "This is the first time that a glider has found tagged sharks and reported their location in real time," said Matthew Oliver, assistant professor of oceanography in the university's College of Earth, Ocean, and Environment, in a press release. The research team, which Oliver heads, had previously tagged the sharks over several years. Sand tiger sharks are the top predator in Delaware's bay and coastal waters and play a major role in the region's ecological balance. They have also been listed as a species of concern by the National Marine Fisheries Service. 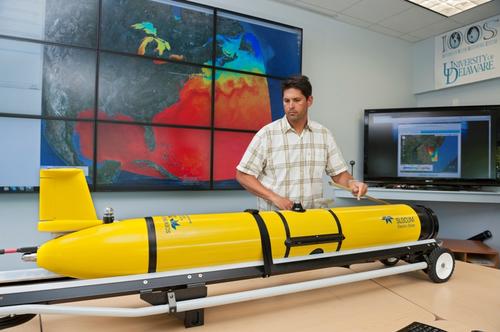 The remote-controlled OTIS, which resembles a yellow torpedo, is one version of the Slocum glider. Designed by Teledyne Webb Research, and used by the Woods Hole Oceanographic Institute, the National Oceanic and Atmospheric Administration, and Rutgers University, among others, Slocum gliders such as OTIS are normally employed to sample seawater conditions.

For tracking sharks, Oliver equipped OTIS with acoustic receivers to pick up signals from the sharks' transmitters. The project is part of a multi-year partnership with Delaware State University. The robot will give feedback about where sharks are traveling faster than conventional tracking techniques.

Like the Wave Glider robot tracking white sharks for Stanford University, two of the three different types of shark tags used in this study are acoustic. One type of acoustic transmitter pings receivers while passing them by. The receivers, maintained by Dewayne Fox of Delaware State University, are located primarily in Delaware Bay, and a few more are situated along the Atlantic coast. A second type of tag, pop-off satellite archival tags, store data on the sharks' journeys for a year. When that amount of time has passed, they are automatically released and send a location signal so they can be retrieved.

The latest tag, a mobile transceiver made by VEMCO, is a hybrid device, combining a 69kHz coded transmitter with a 69kHz monitoring receiver. Attached to a shark, this transceiver communicates its location and detects the pings of other ocean animals that have acoustic tags. "It will tell us not only where it is, but who it's with," Oliver said. "It's like a social network for sharks."