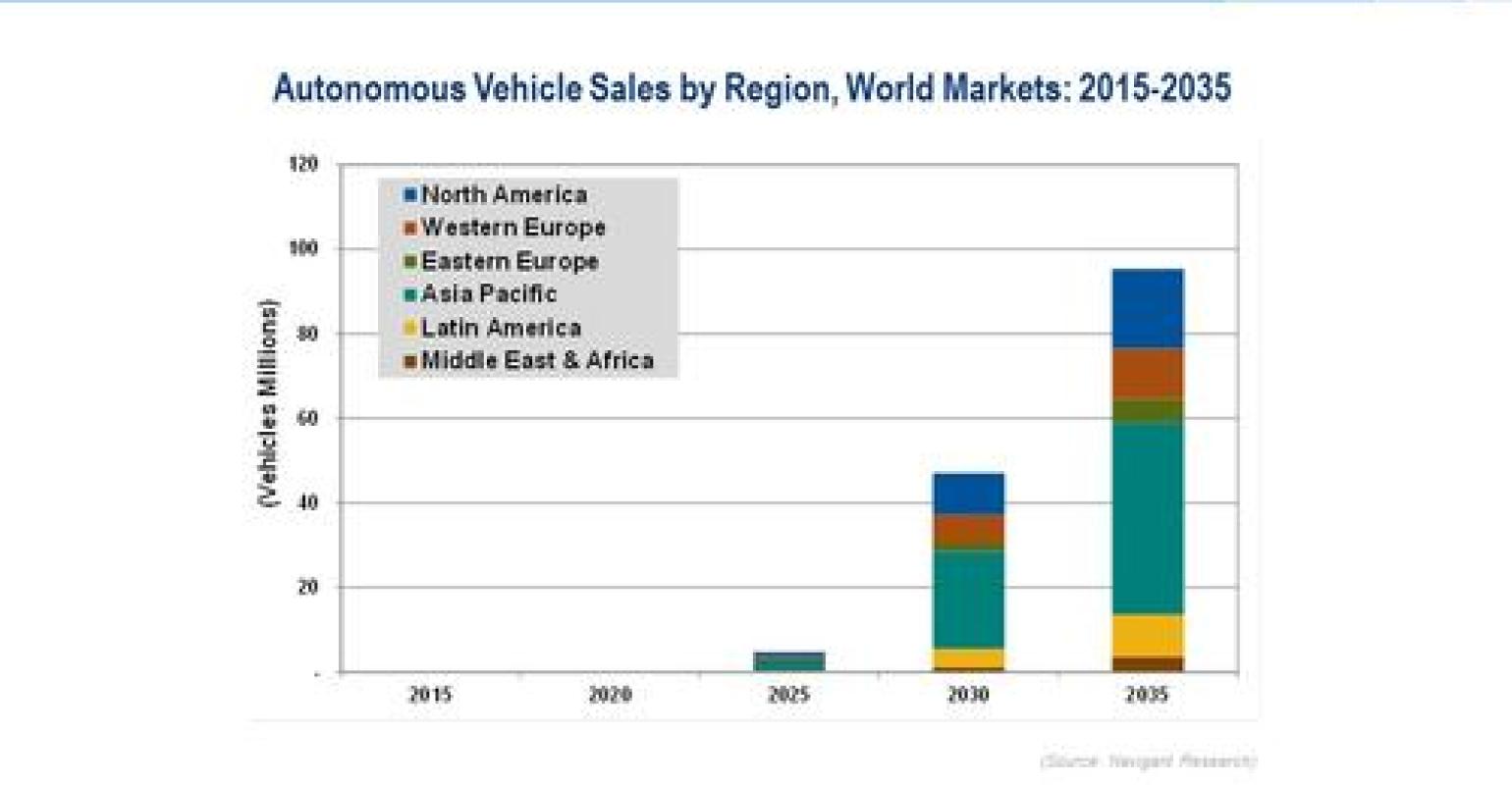 Study: Self-Driving Cars Are Less Than 20 Years Away

Semi-autonomous cars will hit the market by 2020, and fully autonomous, self-driving vehicles could be available for purchase a decade after that, a recently published Navigant Research study says.

"We will get to the point where cars will be produced without a steering wheel and pedals," David Alexander, senior research analyst at Navigant and author of the study, told us. "You'll have fully autonomous vehicles that will be programmed to pick someone up and deliver them somewhere."

In a webinar sponsored by Navigant on Tuesday, researchers said autonomous vehicle technology will keep gaining momentum over the next two decades. By 2025, some vehicles will be able to connect self-driving electronics to navigation satellites, opening up a whole new set of possibilities. "At that point, you might have to manually drive your car from your driveway to the main road," Alexander said. "But then you'll be able to push a button, and the car will be able to handle things like [intersections], traffic lights, and other vehicles." 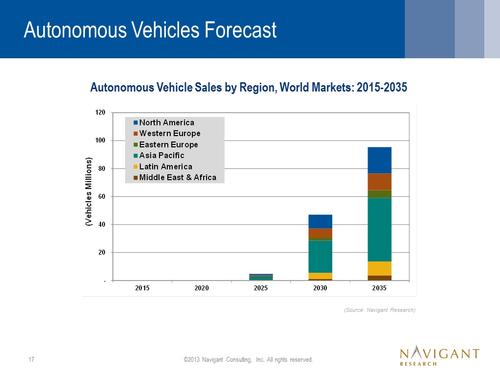 Navigant's study (subscription required) predicts that 4% of vehicles will incorporate autonomous technology by 2025. Before that happens, automakers will continue to build a foundation for the technology, adding sensors and computing capabilities in a bid to create a "semi-autonomous" form of driving. Many cars now offer three of autonomy's key building blocks: adaptive cruise control, lanekeeping, and collision avoidance. But over the next few years, some will start offering features that enable a car to take over when the driver is inching through a traffic jam. Mercedes-Benz already plans to offer such a feature in 2014.

By 2020, many luxury cars will have semi-autonomous technology, Alexander said. He predicted that luxury cars built by Mercedes, Audi, and BMW will be the first to offer it.

But the drive toward autonomy involves hurdles -- both technical and social. On the technical side, engineers will need to enhance computing capabilities to enable vehicles to handle the massive amounts of sensor data. "You've got camera data with pictures at 100 per second, plus radar and LIDAR," Alexander said. "That part of the technology still needs to be more developed." Sensor costs, once considered a stumbling block for autonomous vehicles, have dropped significantly and are no longer a major concern.

Full autonomy also faces challenges from social and legal perspectives. Companies like Google have been issued small numbers of restricted licenses for the autonomous cars they are trying to develop. But as it stands now, laws across North America and Europe call for someone to be in control of the vehicle at all times. As a result, it would still be illegal for drivers to distract themselves with other chores while a fully autonomous vehicle drove them to a destination.

Makers of autonomous cars also face liability challenges, Alexander said. Even if traffic accidents and fatalities dropped sharply, under today's laws, automakers could be held responsible for any accidents that did occur.

Still, experts expect fully autonomous vehicles to reach the marketplace as soon as 2030. The trend is likely to start with autonomous delivery trucks, Alexander said. At some point, pilot programs may also use autonomous vehicles as taxis. At London's Heathrow Airport, such vehicles are already driving customers from parking lots to terminals. "This technology is coming. At some point, when all the bugs are worked out and the legal problems are solved, you're going to see it on every car."